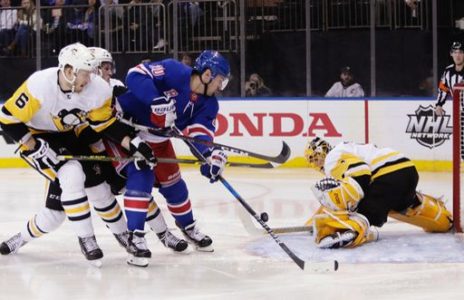 It’s a must win for the Rangers tonight. But baby steps are needed, it’s a must show up and play hockey first. The Rangers were laughed out of Pittsburgh, giving up 12 goals and 2 empty netters in what can only be described as the worst back to back playoff games we’ve seen. Game 4 was easily the worst game of the season for the Rangers.

Things aren’t going to get better either. Pittsburgh is too well traveled to take their foot off the gas. We know this Rangers team doesn’t give up, but we also know this Rangers team hasn’t exactly shown up most of the series. But they’ve mounted comebacks all year, and at least one player on this team knows what it’s like to come back from 3-1 down, twice.

Louis Domingue gets the start.

Crazy Prediction: We don’t want to slam our heads through a wall after the game.