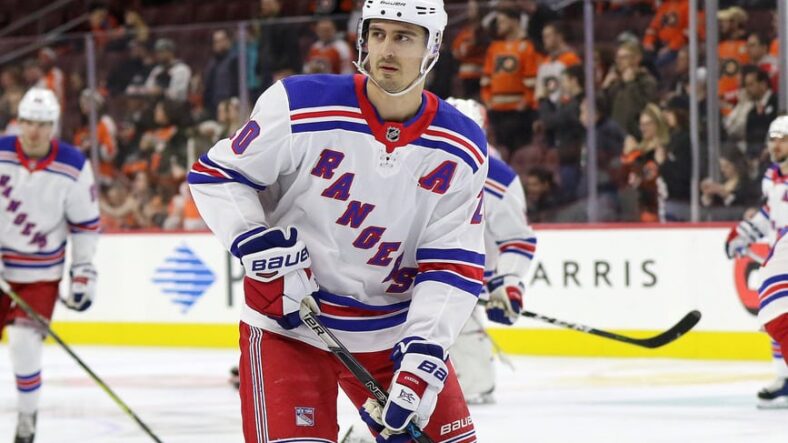 It’s time to name Chris Kreider captain of the New York Rangers. If there was any doubt left before last night, winning the first ever Mr. Ranger Award should have removed it. Kreider did a clean sweep of the Rangers awards: Mr. Ranger Award, Steven McDonald Award, and the nominee for the Masterton Trophy. If there ever was a “competition” between Kreider and Mika Zibanejad, it ended this month.

With the trade of Pavel Buchnevich and the big scoring impact it had on the Rangers, they needed guys to step up. Kreider and his 52 goals did just that. While he is shooting 20% (career average is 15%), he upped his number of shots on goal by 50 this year. He has 255 shots on goal this year, compared to a prior career high of 201. Shoot more, and the puck goes in. With Buchnevich gone, they needed goals, and he answered the call.

When the Rangers need a clutch goal, they go to Kreider. And he’s delivered.

If you watch this video, he’s already had so many clutch goals in prior Rangers runs. Now with the playoffs back in the picture, and Kreider’ game evolving to be more than just a speedy winger, he’s the guy that can get that big game tying goal or OT winner just by parking himself in front of the net.

Kreider just delivers on an off the ice. He’s silenced all (most) of the contract doubters, at least for now, with his performance. He’s killing penalties, playing solid two way hockey, and putting up the numbers to support it. There were jokes yesterday that he would get the ‘C’ before the playoffs. It wouldn’t surprise me. If not for the playoffs, then by next season definitely.

Plus for the doubters: The fastest way to get Kreider traded to Tampa is to give him the C.