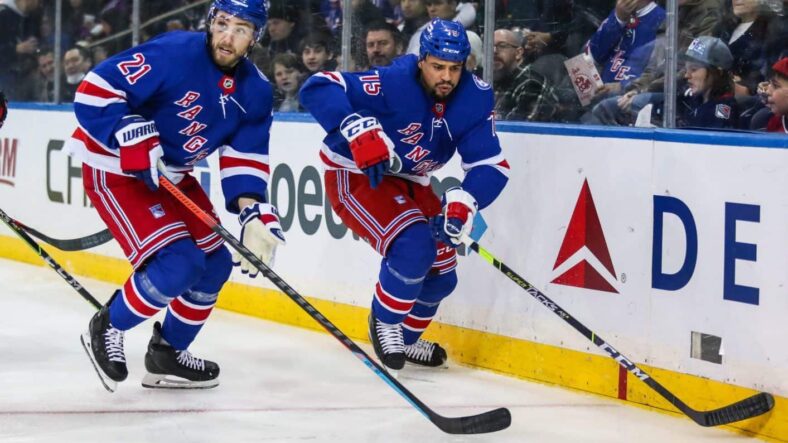 Gerard Gallant said it in his pre-game press conference that even if the Rangers didn’t end up winning this game that it would not be the end of the world. For 30 minutes, the Rangers were the better team on the ice. Better chances, leading in shots, transitioning well, and then after K’Andre Miller’s goal, something woke up in the Hurricanes.

It’s clear why they are such a good team, they don’t give up much this season. While encouraging that the Rangers were able to not only hang with the Canes, it ultimately was disappointing that they could not sustain their play for the full game. The Canes defense adjusted to the Rangers neutral zone play, and were super aggressive with their defense along the boards.

This game was not short of its story lines. The return to Madison Square Garden for Jesper Fast, Brady Skjei, Brendan Smith, and Tony DeAngelo was always going to be an interesting sort of game. The other story line was “Is Chris Kreider going to score 50 goals”? By golly he did, becoming only the 4th player in franchise history to get to the number.

Need I remind the people that the Rangers are almost a century-old franchise? Hand up, I used to critique the guy, but we are looking at one of the all-time greats to don the Rangers sweater from the start of his career. Can he replicate this season? Who’s to say? I used to pray he would get to 30 and something would happen to negate those chances, he’s on another level this season. I have been pushing the agenda since March 7th, but he is breaking Jagr’s goal record. Five to go. It’s destiny at this point.

The Rangers forced the Canes into a neutral zone turnover, and then they just waited out the defense on the ensuing rush. Great job by K’Andre Miller to not only find open space and keep himself in a shooting position, but adjusting his positioning based on puck position. Mika Zibanejad threaded the needle with the pass.

The Rangers turned the puck over in the neutral zone and then got caught in a change. Deadly duo, and it cost them.

The goal itself was off a broken play, but it was Nino Niederreiter who cut to the net, causing the distraction and the screen for what wound up being the game winner.

Win the faceoff and crash the net. It’s a solid strategy when needing to get a goal. Chris Kreider got his 50th goal, the 4th Ranger ever.

The Rangers and Canes were pretty even through two periods, but the Canes took over for the most of the third period, and that was the difference here. Ideally the Rangers are able to spend more time in the offensive zone next time around. 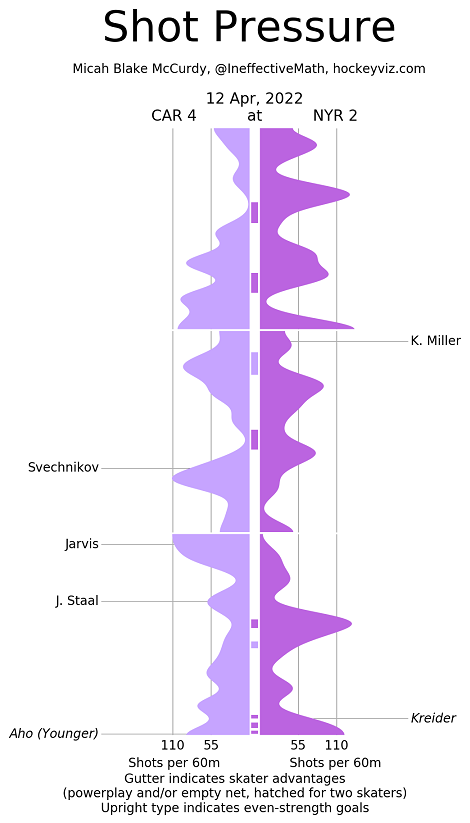 The Rangers and Canes went back and forth a lot in this one, with the Canes eventually taking a fairly significant edge in the third period. These two teams put together a fun battle, didn’t they?

For once, the Rangers led way in the shot battle for the majority of the game, but most of that occurred in the first 30 minutes and then a small flurry with the goalie pulled. The Hurricanes brought their game to another level and the Rangers were just unable to match it. This makes me wonder though, in a 7 game series, should these two teams meet, could they make the adjustments? We are mere weeks away from finding out who we are playing and what we should expect.