Post deadline Rangers are top-5, among best in the league 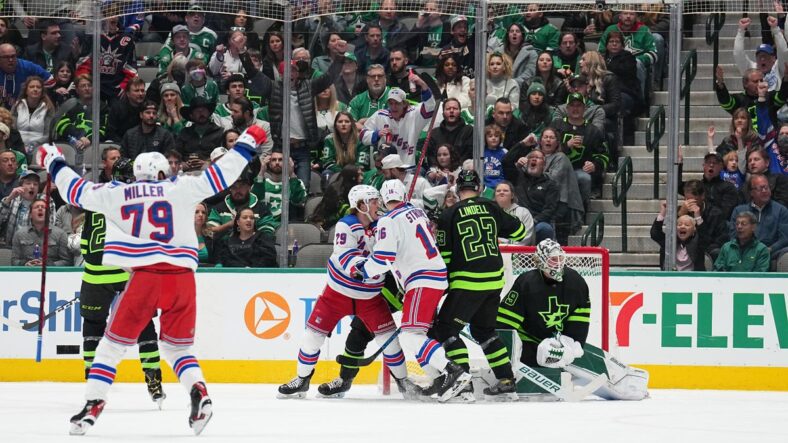 Don’t look now, but here come the Rangers. The post deadline Rangers are among the best in the league, but you wouldn’t know that if you’re just looking at season long charts and numbers. Not to pick on Micah in the linked tweet (I subscribe to HockeyViz and it is worth every cent and then some, and so should you), but it’s the most recent example of how the Rangers were pre-deadline and post deadline.

Instead, I like to focus on tweets like this, from HockeyStatMiner. The Rangers are one of the best teams in the league post deadline, and their numbers show it.

Remember how we kept saying the Rangers simply needed to be good enough? Well they are blowing that expectation out of the water. The post deadline Rangers are better than good enough. They are a top five team in the league in all possession metrics, small sample size warning, and have that look and feel of a true playoff team.

How to tell this team is certainly good enough? Look at the fourth line.

The difference between the pre and post deadline Rangers, aside from them actually playing well, is the goaltending. The goaltending had a huge step back, mostly just regression to the mean, but has started to come back of late. Igor Shesterkin was solid on Saturday night when the Rangers clinched. If he’s back on track, then there’s no need to worry.

The one thing we haven’t seen all season is what the Rangers look like with solid-to-great possession numbers and elite goaltending. For most of the season, we got just the latter, and it was historic levels of goaltending. The post deadline Rangers have been excellent with possession but have received bottom-five goaltending.

All of this is well timed, of course. The Rangers have nine games left in the season, and it appears the goaltending is digging itself out of its hole. We may get a glimpse of what the post deadline Rangers can truly do. As much as we may fear teams like Tampa and Florida in the playoffs, there aren’t many that can skate with the current version of the Rangers.

It seems silly that a trade deadline can alter a team’s course as drastically as it did with the Rangers, yet here we are. The post deadline Rangers, based on their 10 most recent games (small sample warning), are among the best in the league. This is a team that was likely one-and-done unless Shesterkin stole a series. Now they can win the division and you can make a credible argument why they can beat any team in the NHL.

Even if the Rangers decide to rest players, which they most likely will, the process should continue down this path. The key with the Rangers was not only the additions, which fit both the need and the system, but the deletes. The pre deadline Rangers had, on any given night, at least 5 fourth liners or AHL tweeners in the lineup. All of those players have been pushed out of the lineup. They now have the depth to withstand an injury or two while also looking to rest players.

It’s a good time to be a Rangers fan. If these post deadline Rangers continue the solid process, it may not matter who they face in the playoffs. This team can skate with anyone, and have the goaltending that sets them apart from the rest.