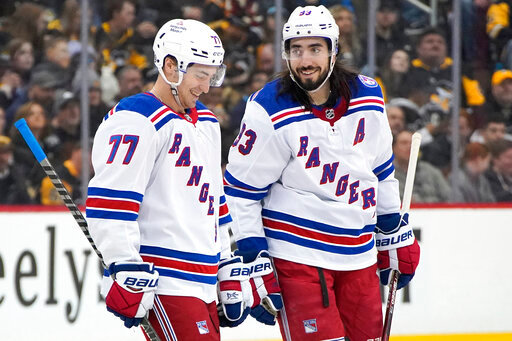 Another game, another two points in the standings, and now the sole possession of second place in the Metro. Pittsburgh may as well have been playing Club Penguin. You couldn’t have asked for a better game from the Rangers from start to finish, besides being able to hit the empty net at the end. They were just paying homage to Ryan Strome.

Besides the last couple minutes of the game, Igor Shesterkin didn’t have to necessarily work super hard. The team played well defensively, only surrendering 24 shots on goal and only 4 or 5 of those were super dangerous (they did get a good amount of medium danger chances though). This was a practice game for what is for sure to come in May. The Rangers had the top end talent to game break before the deadline, but did they acquire the right kind of depth to take on a Pittsburgh in a 7 game series? Sure seems like it.

Like many other players on this squad, I am having a hard time coming up with words to describe the acquisition and marriage of Frank Vatrano to the top line. Who knew having a guy with a shoot first mentality could work playing with the speedy combo of Kreider and Zibanejad? Five goals in 5 games is one way to not only endear yourself to the your new teammates as a clutch player, but put the fanbase at ease that the Rangers can actually roll four lines when healthy.

The Rangers are “only” missing Kaapo Kakko, Ryan Strome, and Kevin Rooney. All of which will be available early next month. Can Kakko come back to the lineup, be stapled to Panarin and Strome, and resume where he was prior to the injury? If he gets a couple of games in and gets into “game shape” again, I see no reason why they couldn’t work again as a trio. The rest of the lines fall into place from there, and the Rangers become an even more dangerous team.

Wanted to use this space to also shoutout the play of Braden Schneider, who scored his second NHL goal. After his worst game in his young career a week ago resulting in a benching and subsequent scratch, he’s come back and shown that he can not only be a steady and reliable force on the right side, but be a player who is coachable. To be able to get on the scoresheet is even better for him, as he strikes me as one of those players that would take this and run with it for a little while much like he did out of the gate.

When the Rangers drafted Schneider, they wanted a big defender who could skate, get mean in front of the net, and provide offense so that it wasn’t just Jacob Trouba laying out those attributes. Granted he’s 20 so maybe he’s a little timid to mix it up just yet, but Schneider made an excellent defensive play on a 2-on-1 where he timed a snow angel just right and swiped the puck into the corner, negating a chance for Crosby. That’s coming such a long way from whatever late stage Dan Girardi, late stage Marc Staal, and Nick Holden used to do in front of Henrik Lundqvist.

Though the emergence of Schneider more than likely cost Nils Lundkvist a roster spot, it’s safe to say that the Rangers right defensive side in particular is one of the best and deepest in the NHL.

Brian Boyle got his stick on the Brian Dumoulin shot, which deflected past Igor Shesterkin. Boyle got good position on Tyler Motte and played it well. Adam Fox wasn’t covering anyone, but that didn’t really factor into the goal.

The Rangers had an excellent shift with sustained pressure, resulting in Chris Kreider forcing Brian Dumoulin into a turnover by deflecting his outlet attempt. Mika Zibanejad had a perfect little touch pass right to Frank Vatrano, who didn’t hesitate.

The Rangers forced the turnover in the defensive zone, then turned it the other way with a textbook breakout. Artemiy Panarin is still a wizard, and waited for Braden Schneider as the 4th man in at the high slot. Schneider was open because the Rangers transition was so quick and so smooth.

Chris Kreider on the rebound in front on the powerplay. Shocker, I know.

Another good execution goal by the Penguins, with Sidney Crosby teeing one up from the point with three guys in front. That was the theme of the Penguins’ goals.

The Rangers controlled most of the game, but it’s worth noting the Penguins got a good percentage of their chances from medium/high danger areas. Nothing overly concerning, but something to keep an eye on in May. 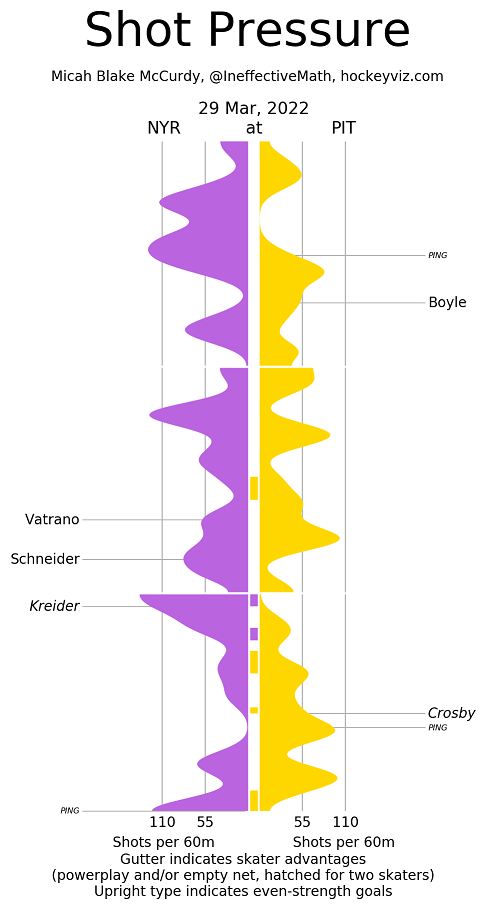 This game was mostly Rangers, although the Penguins did have some flurries of activity. This is two straight dominating performances against their likely first round matchup, always a good sign.

The final two minutes were absolutely a preview of what is to come in the next few months. It was nice to get a little warmup for the old heart to remember what playoff hockey is going to be like. Though it was only a 4 year absence, it felt excruciatingly long and it will be nice to see what this squad can do.

Can they beat the Penguins? Can Washington surprise and beat the Canes? Can we survive another Washington/New York second round series?

One thing is for sure, it’s going to be invaluable experience for Miller, Lafrenière, Schneider, Lindgren, Fox, Kakko, and to a degree Zibanejad. The last time the Rangers made the playoffs was Mika’s first season in New York and he wasn’t Zibanejad just yet. One month to go.