Rangers Recap: Give My Love to Buffalo 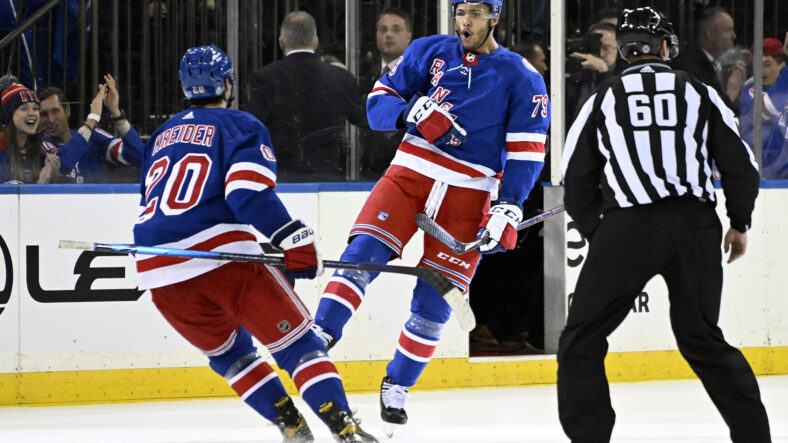 What a game. The Rangers without question dominated in shots with 31-17, had the edge in chances, and played an overall solid team game. Above all of that, this game was huge for the guys acquired at the deadline. How about Frank Vatrano being a difference maker? That 4th round pick by Drury was a pick well spent, as he’s looked electric next to Zibanejad and Kreider on the top line.

Another story line is the emergence of Alexis Lafrenière extending his point scoring streak to 6 games with a goal and an assist. Hand up, I didn’t like the demotion because he was playing his best hockey at the time, but he has taken that and brought it to the 3rd line alongside Filip Chytil, who desperately needed a confident scoring winger. He didn’t have that earlier in the season, there’s no question though that Lafrenière’s confidence is at an all-time high and he looks like a first overall pick at last.

The only critique I would say was the goaltending. Look, it’s been said time and time again that Georgiev’s time in New York is coming to an end and it’s a divorce that is needed for both player and organization. He certainly wasn’t as sharp as he was against Carolina. You know though that Georgiev is going to go to a team next season, play starter minutes, and look competent. Hopefully, the Rangers will bring in a goalie who has the backup mentality.

Chris Kreider jumped the faceoff loss, starting the 2-on-1 with Frank Vatrano. Vatrano didn’t hesitate to shoot, and Craig Anderson probably wants this one back.

Vatrano forced the turnover, Tage Thompson got tripped by the blue line, and Vatrano finished again.

Ryan Strome with a pretty brutal turnover in the offensive zone, and that led to the whole sequence that set up a pretty nice goal by Buffalo. Great passing play, pretty goal, bad turnover by Strome. Also, what in the world was Jacob Trouba doing?

There isn’t really a defensive breakdown on this one by the Rangers. Just a great shot by Will Butcher, using Filip Chytil as a screen.

As great of a move as this was by Kyle Okposo, Georgiev needs to have this one.

Filip Chytil doesn’t get the goal, but he made it very easy for Alexis Lafreniere. Chytil started the rush with the clean zone exit, used the body to protect the puck and secure a zone entry, then the beautiful backhand pass to Laf for the nice move and goal.

Aretmiy Panarin crashed the net on the initial shot, then smartly backed up and put himself in a position to shoot for the rebound. Good play by Andrew Copp to fetch the loose puck on the tie up as well.

Not entirely sure what kind of net front defense this was from Trouba or K’Andre Miller. They had a rough one.

Miller and Copp with the neutral zone steal, then a great passing play with him, Lafreniere, and Miller with the finish.

The Rangers had a bit of a letdown in the second period, but utterly dominated the first and the third periods. 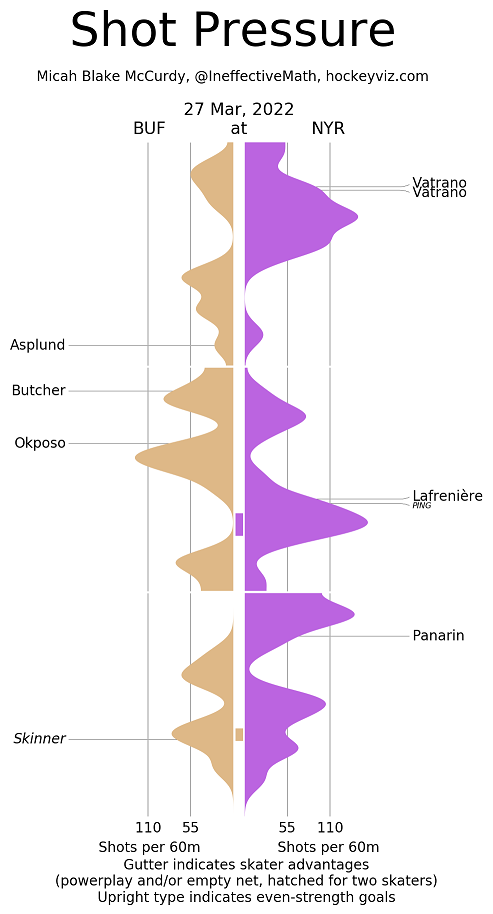 This was mostly Rangers, save for that second period. The Rangers basically took their foot off the gas after Vatrano put them up by two, and it cost them. Buffalo isn’t that good, but they have the skill to make you pay for those kinds of lapses. Luckily the Rangers turned it back on in the third and eventually got the two points.

This is not going to be the normal “mail-it-in” style of hockey for the final 18 games like in years past. If anything, the Rangers, thanks to their acquisitions and tweaking of the lines, look like a team that can go deep. Look at the game winner tonight: Their young players are not only learning with effective veteran players, but are still being put into positions to succeed in big ways.

As for an overall team outlook, they have depth, they have at least 5 forwards who can take over games, a Norris trophy winning defender, and a soon to be Vezina winner. Pray the magic can sustain for 16 wins come May!