Rangers Recap: What the Devil was that?

This was a gut punch. What looked promising and a night destined for some great track meet style hockey, quickly turned into the Devils dunking on the Rangers. This was a classic trap game of sorts. All the hype of the trade deadline day and the momentum coming off two big wins over the weekend–one of which your goalie stole. This was not at all what we all envisioned would happen after acquiring so many different pieces at the deadline.

Gerard Gallant also did something that, to my knowledge, he had not yet done this season–he shortened the bench in the third period. In the context of wanting to see how your 3 new forwards gelled with the team, I can understand it.

What I don’t understand is Lafrenière was then demoted and didn’t get a shift in the third until the game was deemed out of reach. Don’t you want to put your first overall pick in a position to help you score and potentially win the game? This was a truly puzzling decision and one I’m shocked didn’t bring out more accountability from the media.

Lafrenière is playing arguably his best hockey in his young career scoring points in 4 straight, one of which directly led to the first goal scored with his work down low. Why are you punishing him for the complete meltdown in the second period, most of which was the presence of Fox-Lindgren, Braun-Nemeth on the ice. I can never get behind benching a player who is finding his game and at last is looking like a high draft pick.

This was also arguably Igor Shesterkin’s worst game as a Ranger goaltender. It’s not like him to give up some softies, but he let in some softies. Whether the team is gassed after being on the road and winning back to back, or it’s just a quick dip in play, you hope Igor is ready for what’s to come in the next few months. Hopefully the next couple of days off will be good for not only him, but the rest of the team.

The Devils turned the puck over deep in the zone, and from there it was like beer league hockey defense. The Devils didn’t put a body on anyone and didn’t cover the slot. That’s how Mika Zibanejad was able to get to the rebound.

A clean faceoff win, and then two quick passes gave Adam Fox some open ice. This seemed like a set play off the faceoff. Fox beat Daws clean. Andrew Copp took the faceoff, getting his first point as a Ranger.

Adam Fox with the turnover at the offensive blue line, which sprung the Devils for the chance. Shesterkin made the first save, but Tomas Tatar poked home a loose puck in Shesterkin’s pads. Turnovers at the blue line always lead to danger.

The initial rush had some poor positioning, but the Rangers recovered as the Devils were able to set up in the offensive zone. There was no coverage breakdown here, as the chance from PK Subban was a low danger chance. But with four guys in front, Shesterkin simply didn’t see it.

Turnovers are brutal, as is leaving someone uncovered at the net mouth. The Rangers forgot about Dawson Mercer, and then it was in the back of their net.

Another turnover, another goal. The Rangers forgot how to keep the puck on their sticks in the second period.

Another turnover, but this one was a bit weak on Shesterkin.

The Rangers remembered to play hockey to start the third, creating a good cycle in the offensive zone. No one picked up Ryan Strome in front, who got a step on his defender for the deflection.

Chris Kreider didn’t shoot on the shorthanded rush, which turned into a 3 on 1 the other way.

A missed hit, a forward trying to defend Jack Hughes, and you know how this wound up.

Fox has some offensive vision, doesn’t he? He held the puck with the man advantage and waited the play out, getting the puck to Copp at the bumper position, then Kreider collected the rebound.

This looks more even than the way the game played out, and that’s mostly because the Rangers played excellent in the first, and then the Devils sat back in the third. 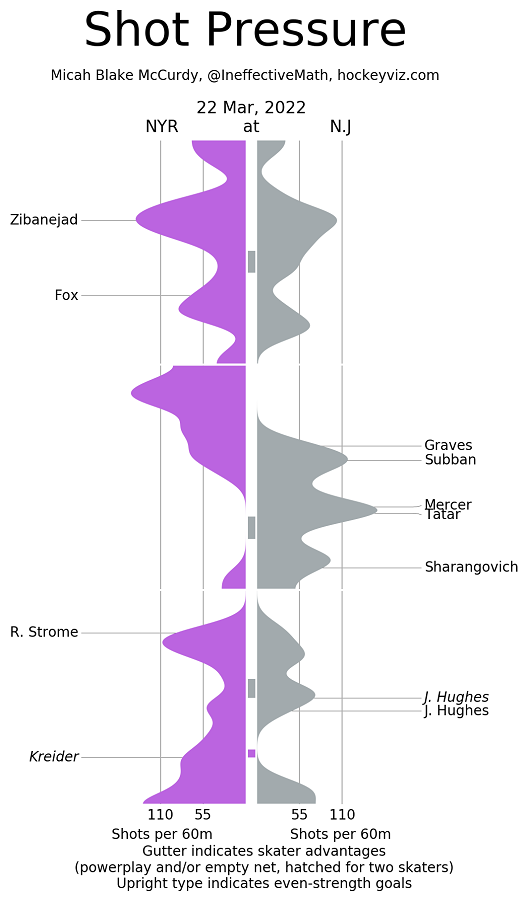 Expect this group to have a response on Friday against Pittsburgh. New faces, different places, it’s part of the game within the game so to speak. I think Patrik Nemeth needs to be scratched next game though, he has been an awful fit all-in-all in New York. I hope Gallant shows some spunk and actually pairs Braun with Schneider who would push play offensively.

Anyways, this team will ultimately be fine, make the playoffs, and could even go deep. Even with that, this game was a gut punch, no question about it.