Managing Shesterkin’s workload will be key down the stretch 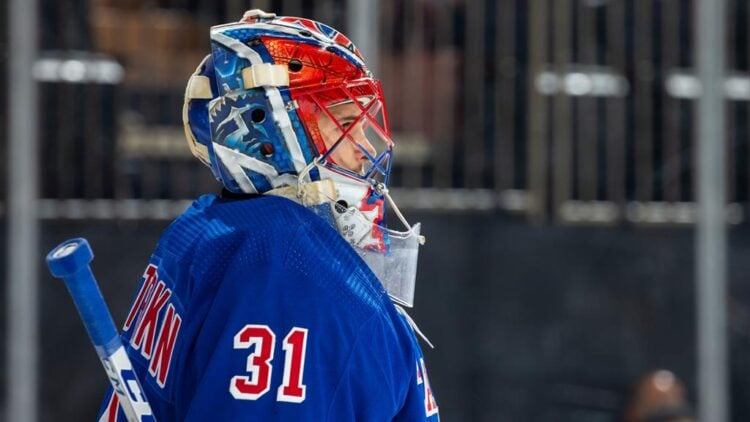 As the Rangers finish up February, they will be playing fast and furious in March and April. They will finish February with 53 games played, leaving 29 games to be played in March and April. That’s 29 games in 60 days, close to a game every other day. We can talk about trade deadline acquisitions all we want, but it’s clear the Rangers’ success will be dependent on Igor Shesterkin’s workload. Managing that workload will be critical for Gerard Gallant down the stretch.

Generally speaking, you want a capable backup to play about 1/3 of the games through the season. Holding that logic, you want to see Alex Georgiev get 10 games in during March and April. Georgiev is a more than capable backup, despite what detractors say. He’s had some rough games, but for the most part he’s been fine.

Picking and choosing the spots for Georgiev is also critical. The first game of back to backs seems to be Gallant’s preference, with Georgiev getting a fresher Rangers team in front of him. But that sets him up for March 29 at Pittsburgh and April 12 and April 26 against Carolina, which likely isn’t the best idea for the Rangers. Georgiev does better when he gets regular work, but this is setting him up for failure.

The second games of those back to backs are at Detroit, at Philly, and home against Montreal. Those seem like much better options for Georgiev. It also sets him up to close out the season against Washington if playoff seeding is wrapped up. That would give Shesterkin about 4-5 days off before the playoffs start. That’s good rest, but also not enough rest throughout March and April.

Gallant will need to find about 7 more games for Georgiev to ensure his starter stays fresh and, hopefully, free from injury due to overload. If we assume he gets 8 games before the Montreal/Washington duo to close the season, then that’s 10 games total. So we need to find six more games. However this isn’t about finding the right spots for Georgiev to be successful. It’s about finding the right spots for Shesterkin to get rest. This is about managing Shesterkin’s work load, and nothing more.

The Rangers can do whatever they want at the trade deadline, but if they don’t manage Shesterkin’s workload, then they are in for some trouble. Be that with Georgiev or another backup that comes in, should the Rangers find a good return for Georgiev. But that’s a whole separate discussion.