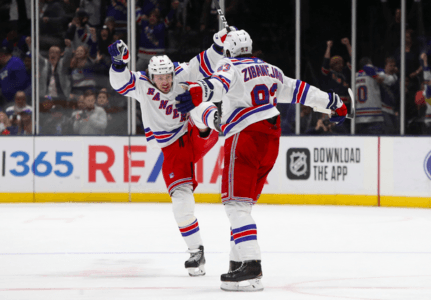 It seems odd to say that the Rangers are not a good offensive team, yet here we are. It doesn’t take a sharp eye or keen mind to see that the Rangers struggle at generating sustained offense at even strength. It’s why, for the most part, we see Igor Shesterkin bailing out the Rangers regularly. Scoring goals and generating offense are not one and the same, as crazy as that sounds. Sustained Rangers offense is the best way to get more even strength success, which is so critical in the playoffs.

Generating consistent offense on the cycle and getting more than just one chance in the offensive zone has been a discussion point here for a few months now.

Noticed while recording the pod on MON that #NYR is currently >50 in their 5-game rolling xGF %. Here's the relationship between xGF & xGA in driving that %.

While not a perfect fit, you can tell that when they generate more offense, the xGF% usually follows. xGA is hit or miss. pic.twitter.com/iUVgPZfNyr

As Rob points out, there is a connection between the Rangers generating chances and them staying above the 50% expected-goals threshold we want them to be at. The Rangers don’t need to be perfect, they just need to be good enough heading into the playoffs. This is important, since as of now the Rangers don’t have the even strength numbers to hold up in seven game series against the best in the NHL.

For the first time in years, the key to unlocking the best Rangers team isn’t on the defensive side of things. Sustained Rangers offense is the key – but how do we get there?

Figure out the top-six

To say that the Rangers are a top heavy team is an understatement. They have four forwards that put up the majority of the goals and points, and the rest of the team is providing tertiary scoring at best. Yet despite the top heavy nature of the roster, the top-six is not without their own issues.

The issue, as expected once the Rangers finished their offseason, is finding the proper RW on each line to round out the top-six. Chris Kreider and Mika Zibanejad have seen Kaapo Kakko, Alexis Lafreniere, and Barclay Goodrow as their RW, each to varying degrees of success. Ryan Strome and Artemiy Panarin have seen Kakko, Goodrow, and Dryden Hunt.

Getting the obvious out of the way: If Hunt or Goodrow are in the top-six, the Rangers aren’t going far. It shows a flawed team. That’s not intended to be an insult to Hunt or Goodrow, it’s a statement about roster construction. This is a team that needs consistent offense, and neither Goodrow nor Hunt have that skill needed to help drive offense.

The good news is that Kakko really clicked with Strome and Panarin, and that line played exceptionally well while together. Kakko should be returning from injury soon, thus the second line should figure itself out. Lafreniere has also seemed to find a rhythm with Kreider and Zibanejad. If this is the case, then perhaps the top-six has figured itself out.

This does assume that Gerard Gallant doesn’t galaxy brain the lineup. As currently constructed, that is the ideal top-six for sustained Rangers offense.

If both Lafreniere and Kakko finally stick in the top-six, then it opens issues on the third line. There is no one more snake bitten than Julien Gauthier, who has fantastic offensive driver numbers but barely has any points. He’s shooting 5%, which is actually his career average through 81 games. Is he a pure play driver with minimal scoring touch? Could be, or he could just be in an extreme shooting slump. There’s not enough information on him yet.

The problem is the Rangers don’t have time to wait that out. Between him and Filip Chytil, they are expected to provide tertiary scoring. At least we can point to Chytil’s 5.6% shooting rate as a slump, since he has enough games to show us he shoots around twice that. No matter how we want to explain it away, seven goals from that duo is not going to cut it come playoff time.

This is the primary driver for an upgrade at forward, be it center, wing, or both. Reilly Smith over Gauthier would be a marketed improvement. And as much as I like Gauthier, he’s not the kind of guy you force into the lineup. Nor is he the guy that keeps someone out.

The Rangers are supposedly in on JT Miller, who can play wing or center, and then slide in for Ryan Strome at center next year. While all that sounds good on paper, perhaps the Rangers can find a better bargain elsewhere. Specifically, Jared McCann in Seattle, if he is made available. That’s just a personal preference though, either will work for both this year and next.

Chris Drury is said to be active in the trade market, but nothing has materialized yet. This isn’t a surprise, as we likely won’t see things heat up until March as the deadline approaches. Roster size limits and current standings will impact who and when moves will be made. Given the expected cap shenanigans from Vegas, there may not be a need to make a move from many teams right now. As much as we want to see something, we will likely need to be patient.

Sustained Rangers offense is the key to unlocking a long playoff run. The defense is fine, and will likely see improved numbers as the offense starts to generate more chances. After all, if you have the puck in the offensive zone, then the opposition can’t shoot or score. It doesn’t take rocket science to correlate the two schools of thought.