It took the shootout, but the Rangers came away with a big two points all thanks to the efforts of their big guns. Chris Kreider, Artemiy Panarin, and Adam Fox were major catalysts to the offense last night. The shootout proved dramatic as well with a variety of great goals; arguably the most important by Alexis Lafrenière, following a goal by fellow draftee Quinten Byfield, that helped to extend the shootout for an eventual Adam Fox winner. Lafrenière has been a major discussion in the Rangers universe, and for good reason as a 1st overall pick, his goal was straight clutch and filth though. May it at long last be a jumpstart for him.

Speaking of clutch and filth, there are not enough words in the English language to describe what this season has been for Chris Kreider. In year 9, he at long last has hit what many thought he was going to do 5 years ago–a 30 goal season!  Was there also any other way for him to accomplish this than on the power play? Absolutely not. There is no greater net front presence in the entire NHL than Chris Kreider and it is absolutely not up for debate. What the Rangers have been able to accomplish this year due to the brilliance of their power play has been the stuff of legends. For what feels like the first time in a long time,  the Rangers have truly elite special teams this year and on a consistent basis because of their star power. Yes, 5v5 play of course rules the day when it comes to the playoffs, but even if the Rangers power play were middle of the pack, are they first in the Metro?  Would be a great case study. I personally don’t find power plays to be a negative aspect of analysis of a team though, the point of them is to score when you have the advantage!

There’s nothing negative to say though about the game of Igor Shesterkin, we are watching another legendary Ranger goaltender rise up before our eyes. He’s got to be the winner of the Vezina this season right? Whenever number 31 is in net, it feels like the Lundqvist years already, the Rangers will probably win. How spoiled are we to go from Mike Richter, to Henrik Lundqvist, to Shesterkin. The Rangers may give us fans a lot of pain and headaches, but one thing is for sure, they sure know how to draft franchise goaltenders. Igor let a few goals in in the shootout, but ultimately came up big after Lafrenière extended the shootout and had to face Arthur Kaliyev. He stoned him and then Adam Fox put the Kings away.

As an aside, Dave and Tyler started combining their recaps into one post. Dave still does the goal breakdowns, with Tyler adding his thoughts and reactions leading into it.

Chris Kreider, the best net front presence in the NHL, finally gets to 30 goals with the Rangers on the powerplay. Thanks to Brendan Lemieux, aka shorter Carrot Top, for that. Kreider’s strength isn’t just with screens and deflections, it’s with finding those open pockets of ice and getting in a position to shoot, as he did on this one.

An offensive zone turnover led to an odd man rush against tired legs the other way. K’Andre Miller couldn’t catch Blake Lizotte, who used Jacob Trouba as a screen and picked the corner.

Alex Iafallo found the seam in the penalty killers, just at the bottom of the circles, above K’Andre Miller and below Greg McKegg. Shesterkin got bumped when Trouba shoved Dustin Brown into him, which gave Iafallo enough room to collect the loose puck and roof it on the backhand. Miller had some issues picking up his man on the PK all game. It’s his first year on the PK, he will get there.

The second line had themselves a third period. After a very long offensive zone shift that drew a penalty earlier in the period, they did the dirty work on this shift. They got in on the forecheck, they cycled, and they eventually found open ice for a shot with a man in front. Barclay Goodrow has now tied his career high in goals.

The Rangers really didn’t look good at even strength this game until the third period. That period was the kind of period we need to see from the Rangers going forward. They cycled, got in on the forecheck, found open ice, and generated some blue collar goals. If they want to win in the playoffs, they need to generate goals like that too. If we get more periods like the third this season, we will see more sustained offensive pressure.

All that said, the Kings really controlled the even strength game. 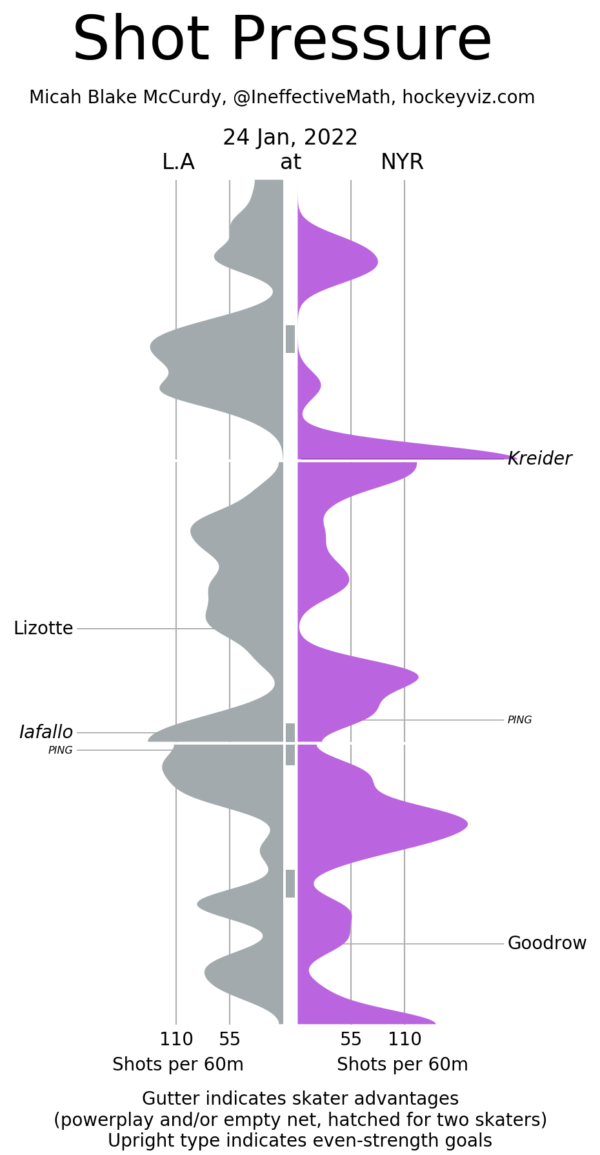 Game flows are at all strengths, so the Kreider goal is obviously on the powerplay, when the Rangers controlled play. But for the most part, the Kings controlled this one. That matches what we saw, with most of the even strength play in the Rangers zone until the third period.

There is no franchise we enjoy beating more than the LA Kings after (redacted). To be honest, some of the saves Jonathan Quick was making tonight gave me Vietnam flashbacks to(redacted) we all try to forget ever happened. Anyway, another game where the Rangers find ways to not only get points, but win. Thank you Tom Wilson, thank you for breaking the Rangers.