Thoughts on the Rangers/Jakob Chychrun rumor 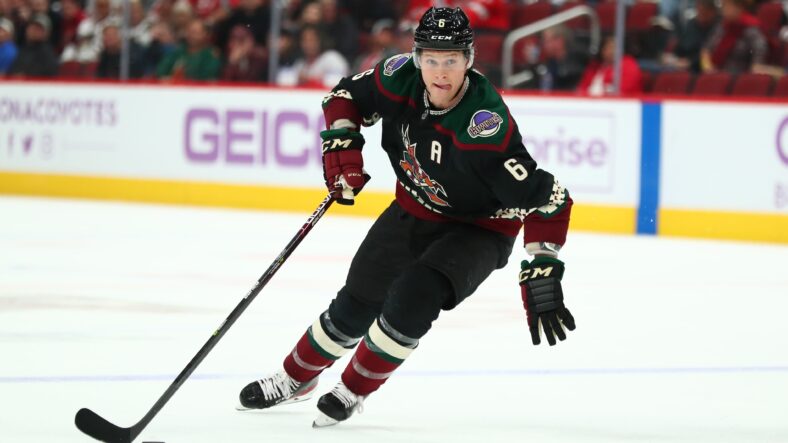 During Saturday night’s win over Arizona, the Rangers were involved in yet another Jakob Chychrun rumor. This time, it was a deal on the table the defenseman, with Vitali Kravtsov as a centerpiece. This broke as the Rangers were playing the Coyotes, which made it a little funny. From a pure rumor standpoint, this one at least passes the sniff test, since the Rangers likely won’t deal Kravtsov for a rental. However from a usage standpoint, it’s one that doesn’t quite make sense, both from a cost and a fit perspective.

The Rangers don’t need help on defense. Or, at least, they don’t need a major overhaul like this one would provide. Jakob Chychrun is a top-four defenseman, where the Rangers currently have both Ryan Lindgren and K’Andre Miller. Both are having fine, if unspectacular, seasons, and both appear to be in the long term plans for the Rangers. Lindgren has been stapled to Adam Fox, giving the team a traditional offensive/defensive top pairing of defensemen. Miller has been stapled to Jacob Trouba, and the pair has been somewhat effective, albeit extremely streaky.

The big need on defense isn’t in the top four, but in replacing Patrik Nemeth. Nemeth’s lack of mobility has taken a step back this year, and he is being exploited horribly. Initially thought to be a good signing, it’s clear this isn’t working out. I’m sure you are all twitching as much as I am when I think about how many times he’s chased the play behind the net.

Chychrun doesn’t necessarily replace Nemeth though. He’d likely replace Miller, shifting the young Miller to the third pair. That’s not necessarily the concern. The concern is spending the assets needed to acquire Chychrun to strengthen a strength instead of addressing the true need, which is a scoring forward.

As I just reported on the 32 Thoughts segment on Hockey Night in Canada….
The Arizona Coyotes have at least one offer that meets their criteria in a Jakob Chychrun deal – two former first round picks and a 1st round selection in an upcoming draft.

If we assume this is true, then Kravtsov and the Rangers 1st round pick are on the table. That leaves one more first round pick caliber type player. Jokes Jarred Tinordi (22nd overall in 2010) notwithstanding, it means the Rangers need to add another piece. This is where it gets tricky.

The first round pieces that are likely to be available/moved in a deal like this are Miller, Filip Chytil, Julien Gauthier, Nils Lundkvist, Braden Schneider, or Brennan Othmann. Gauthier doesn’t move the needle, or at least shouldn’t. So he’s out. Trading Chytil in a deal like this without bringing another top nine forward back just exacerbates the scoring issue. So he’s likely out. Plus Kravtsov is a forward, and it’s safe to assume Arizona would want a defenseman back.

As an aside, Zac Jones was a third round pick, so theoretically he doesn’t fit Arizona’s ask.

The smart money is on one of Lundkvist or Miller being the third piece. We’ve discussed that Lundkvist is likely the odd man out on right defense, so his inclusion makes sense. As does Miller’s, since Chychrun would slide into his role immediately. It’s really two sides of the same coin.

As far as Nemeth being included, I think that needs to happen to simply offset salary for the next two seasons. But that’s not an immediate need for this season, and it’s something that can be done at the draft.

Why spend pieces for a luxury with question marks?

Jakob Chychrun is a luxury for the Rangers. He’d be a nice luxury, with another three seasons at a $4.6 million cap hit. That is a bit of a bargain for a top-four defenseman. He’s not a bonafide star though, and there are legitimate concerns that shooting (he shot 18% last year) has inflated his totals. 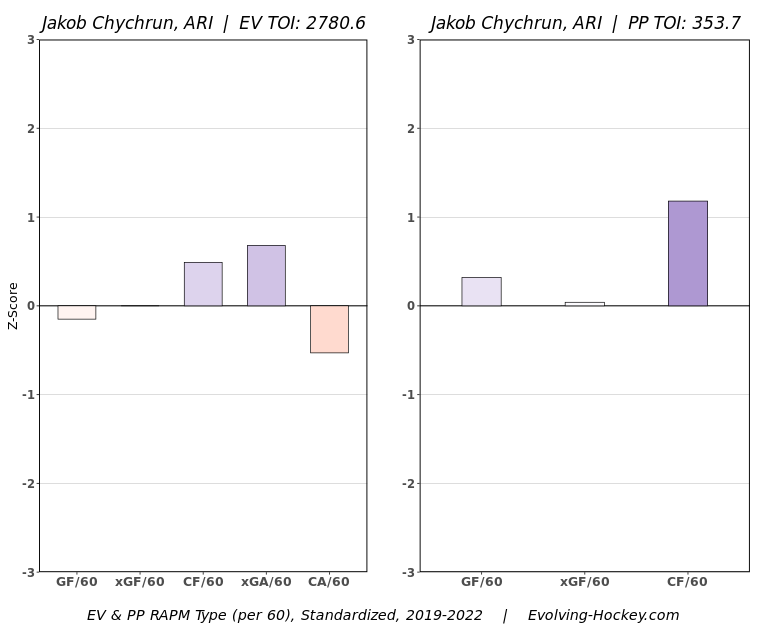 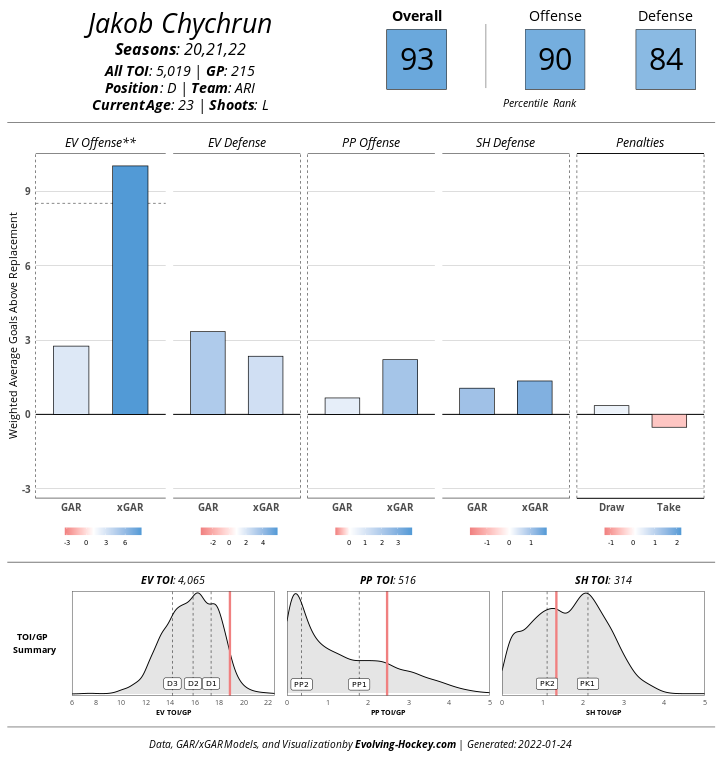 Always take note when charts like these don’t sync up. There is a very clear discrepancy between his RAPM, which doesn’t account for shooting and tries to isolate the individual from the team, and his xGAR, which includes shooting and some team impacts. Using his three year averages, since this year isn’t fair to use given Arizona’s ineptitude, there is a major difference between the two charts. I spoke about this with Evolving-Hockey, and the Cliff Notes version is that shooting accounts for his huge xGAR plot. While it doesn’t mean he is bad, because Chychrun is still a good player, it may mean he’s not as good as advertised.

Chychrun’s player card shows he’s a legitimate top pairing defenseman, when there is still a chance he’s more of a top four defenseman. Still good, and still worth the contract, but not “league leading in goals by a defenseman” good. For $4.6 million, that’s likely still a good bargain.

This again circles back to cost, though. The Rangers would be giving up three significant pieces for a guy who is not a guarantee who doesn’t address a team need.

For the pieces on the table, wouldn’t it make more sense for the Rangers to use those pieces to address the real need, which is top six scoring. The offense can’t generate any sustained offense with any kind of consistency. These offensive outbursts are great to see, but they don’t hold up against teams like Carolina, LA, Vegas, or other top tier teams. Even Toronto has dominated the Rangers, but got Shesterkin’d twice. Ditto Florida. These are teams that will most likely crush the Rangers in a seven game series (except for Toronto, since, you know, it was 3-1).

The Rangers acquiring Chychrun would be nice, and most likely an upgrade on the current defense group. However is it really what they need? Does it move the needle enough to ensure this team can keep up with the top offensive teams? It’s tough to say it will when Dryden Hunt is the best option at 2RW, or when one injury means Greg McKegg slots into the fourth line. This team has no forward depth. None. I like Jakob Chychrun, but the pieces used to acquire him at likely best spent on actual roster holes.