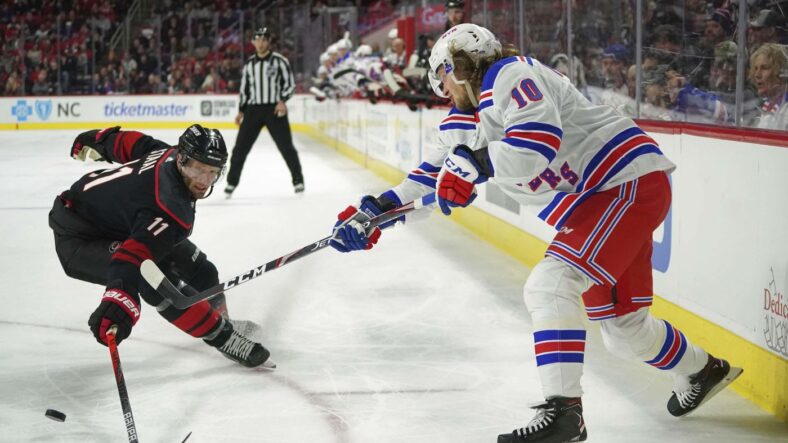 Well, as the saying goes, you can’t win them all. That was certainly the case for the Rangers, who got taken out back behind the woodshed and beaten up. Even though a result like last night was to be expected with how the Carolina Hurricanes have been a shot dominant team for so many years, you still hope there would be some semblance of “fight”. Carolina is a buzz saw and are definitely a pick to be a top four finalist in this year’s playoffs. Don Waddell and Rod Brind’Amour are a lethal combo and communicate what they want and it shows. How often does one see the Hurricanes take a shift off? These are the kinds of lessons in the end that are good for a still young Rangers team to get humbled.

This is the kind of game where you look at the two teams, and you see the chasm of depth between the two. Yes, the Rangers decided this offseason to load up on tough, rugged, gritty, veterans. All in all, I would say those players have lived up to what they were expected to be thus far. They go out, have some offensive zone time, a couple of chances, a few big hits to get the crowd into the game, and then throw out the Mika and Panarin lines and hope they got a boost from it.

The problem is, unlike the Hurricanes, the Rangers lack the scoring depth and the defensive depth for that matter to truly go up against the kind of game Carolina plays. Even Adam Fox–who I would rarely say anything negative about any aspect of his game–looked a little lost on certain shifts when Sebastian Aho, Teuvo Teraveinen, and Andrei Svechnikov were out against him.

The decision in goal was also super interesting. But, I will say, of the 6 goals allowed, I would truly say only 2 of them were really at the fault of Alex Georgiev. Two pure screens, one was a nasty deflection, and then another was a bad defensive read and an odd man rush. What are you going to do?

On to the goal breakdown, which we are combining into this post today. Let us know what you think of the combined goal breakdown and recap in one post.

Tony DeAngelo’s shot on the powerplay got deflected by Vincent Trocheck in front. Patrik Nemeth was there, but did not get good position on Trocheck and was a bit lazy with the stick.

Adam Fox mishandled the bouncing puck, and the ensuing 2-on-1 was not played overly well by Ryan Lindgren, but tip your cap to the perfect pass by Sebastian Aho to Seth Jarvis.

Ideally you want Alex Georgiev to stop this one, but that’s six guys in front at the time of the Jaccob Slavin shot. The forwards were very soft on the defense on the coverage too, something you don’t see that often.

Nice work by Mika Zibanejad to get open off the faceoff for the feed from Artemiy Panarin. Zibanejad from that spot is almost automatic.

There was no faceoff support on this, as the Rangers actually won the draw, but no one came in to collect the puck. Panarin did a complete fly by on it too, allowing Teravainen to collect the puck and start the chaos. Aho went in untouched to get the goal after a few tries. This was a disaster goal all around.

Nemeth bit on Svechnikov behind the net. That left the front wide open. Tough to blame Barclay Goodrow, since he has his own man to cover.

Chris Kreider is the best net front presence in hockey. The deflection attempt, then the rotation off to bury the rebound. Perfection.

No one picked up Greg McKegg coming in from the faceoff dot. Carolina, as good as they are on offense, are not good defensively. 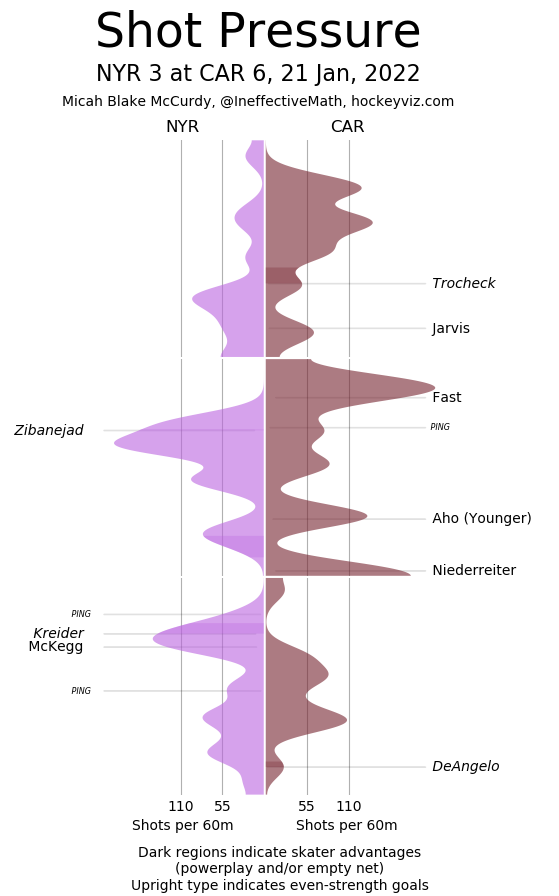 Does this surprise you? That the Canes controlled most of the game? If it did, then take a step back and re-evaluate how you watch games. Because this was clear from puck drop that the Rangers didn’t match up.

It doesn’t take a rocket scientist to know that the Rangers got rocked by the Canes. They controlled every facet of the game, and exposed the Rangers for their lack of depth, lack of offense, lack of sustained offense, and quite frankly, lack of quality. The Rangers are not as good as the Canes, that’s it.

Well, this is a game you burn the tape, you get on the flight home, and you beat the doors off the Arizona Coyotes at Madison Square Garden tonight. Don’t let this one game against an elite opponent get you down, throw Shesterkin in the net at home, and show the Coyotes absolutely no mercy.