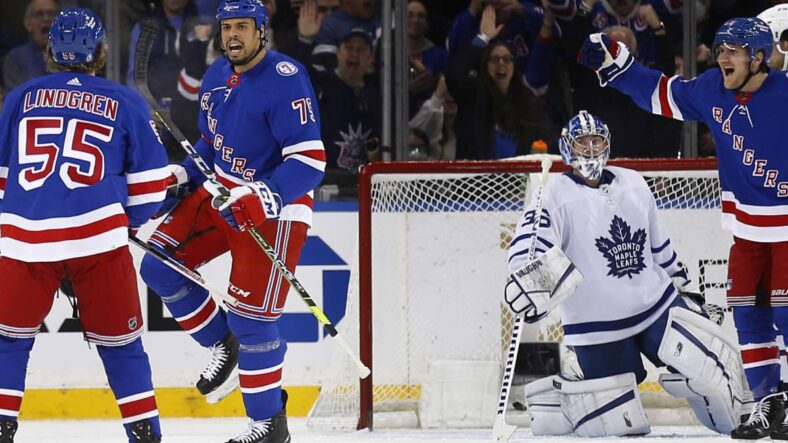 You know when you are just so proud of a friend or loved one that you almost don’t have words to express it, but you have a gigantic smile on your face that is organic and genuine? That’s me with this Rangers squad right now. Talk about falling in love with a bunch of just fun players. Even when they fall early in the game after being off for a while, this team just finds ways to win hockey games. The Rangers are now 17-3 against Eastern conference teams this season. We haven’t seen this kind of dominance when it comes to the standings since the President’s trophy season. With a home record as well now of 11-3-2, MSG is once again a true home ice arena. There’s many avenues of thought we can go to from this game, but let’s start with the obvious: Ryan Reaves.

Talk about a guy deserving of the kind of game he had tonight. In 12:04 of ice time, he had 2 goals on 2 shots, and 5 hits, including a hit that led to him separating Travis Dermott from the puck and eventually getting his 2nd goal. Even though he was brought here for his edge, it had to feel great for him to finally pot those two goals in the back of the net. All the personality, character, and charisma he has brought with him in his time in New York has made him an incredibly easy guy to cheer for. Now if only he was able to get the hat trick.

Now Reaves wasn’t the only Ryan to score tonight, the game winning goal was scored by none other than Toronto native Ryan Strome off a broken pass attempt by Ryan Lindgren. Thus dubbing this game forever and always as the “Ryan Game”. When you get a complete game from both your top and bottom six forward units like the Rangers got tonight, a few additions and this team is bound for a stretch of hockey come May. With the brilliance of Igor, the relentless goal scoring of Chris Kreider–who once again found his way into the goal column–, the dynamic Artemi Panarin, and the cunning vision of Adam Fox, this team is just bleeping fun. To be down 2-0 early, Reaves get his first, Leafs respond, and then the Rangers score 5 unanswered shows a type of resilience that has been sorely missed for many years in this organization. Now, can they replicate this type of performance against a lethal, dominant, and dynamic Carolina Hurricanes team? We shall see!