Can Igor Shesterkin win the Vezina and the Hart? 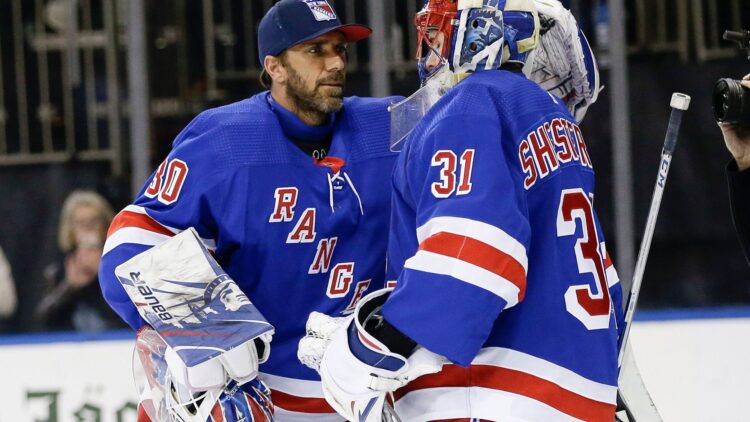 Ranger fans are extremely lucky. After 15 years of one generational netminder in Henrik Lundqvist, we get another elite goalie who has the potential to be even better in Igor Shesterkin. Shesterkin’s calm presence in net has steadied the Rangers through roster turnover, a new coach, a front office shakeup, and a poor start by most of the skaters. Now the Rangers are sitting in first place, and it is almost entirely due to Shesterkin. It’s very possible that Shesterkin can win the Vezina and the Hart, a feat that has only been accomplished by four others (Jacques Plante, Dominic Hasek twice, Jose Theodore, and Carey Price).

Vezina should be Shesterkin’s to lose

There is no hyperbole in stating that the Rangers would not be in first place without Shesterkin. Of all goalies that have played at least 800 minutes thus far, Shesterkin is among the leaders in (at 5v5, score/venue adjusted):

And that’s just at 5v5. It’s on the penalty kill where Shesterkin has posted even better numbers. In all penalty kill situations, Shesterkin is among the league leaders in:

These are a lot of numbers to tell you that Shesterkin is top-3 in almost every statistic that goalies have to be measured by. He’s top-2 in all but penalty kill GAA. Simply put, he’s the best goalie in the league at the moment, and he has the numbers to back it up. 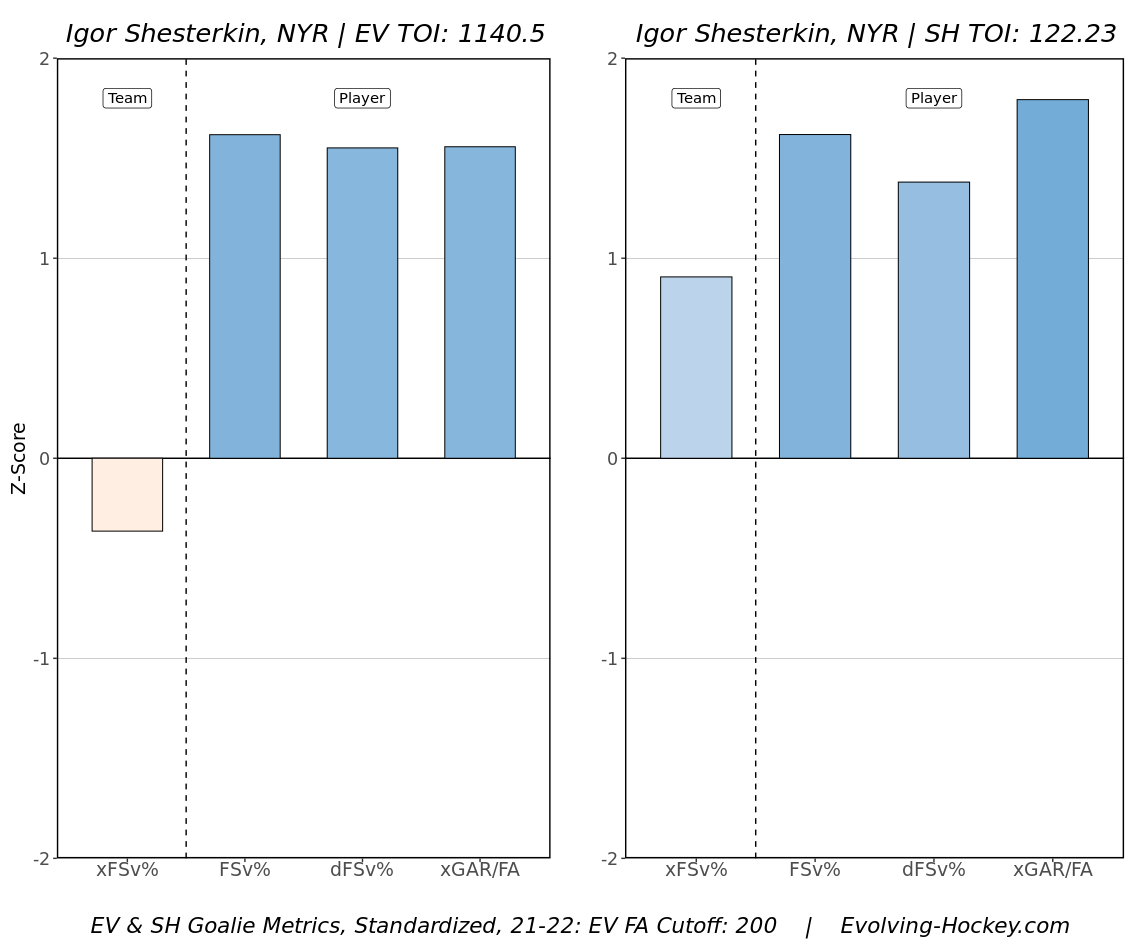 If that was one too many numbers, here’s a graphical representation of what they mean. Starting with the left most line, the only red bar, it represents how the Rangers have played in front of him at even strength. The Rangers haven’t been overly great at even strength, and most of the game is spent in their defensive zone. Given the shot quantity and quality he faces, Shesterkin should have far worse numbers at even strength. Yet he’s among the leaders. He’s been stealing games left and right, and basically stole the month of October for the Rangers.

Everyone seems to love Jack Campbell, who is seeing his numbers fall somewhat. Andrei Vasilevskiy is always in the discussion too. Same for John Gibson. But as of now, Shesterkin’s numbers have blown all of them out of the water. You’ll see these guys pop up in the top-3 in some stats, but not all.

Measuring Shesterkin’s chance for the Hart

It is difficult to quantify where the Rangers would be without Shesterkin, but GSAA above gives us about 12 goals that he’s saved above what is expected. That’s about four wins, give or take, if we use some generally accepted numbers that three goals is a win. It’s not a perfect science by any stretch, but it paints the picture. At this point in the season, Shesterkin alone has given the Rangers four wins more than expected.

Four wins –which seems low, doesn’t it?– puts the Rangers at 48 points and 4th in the division. Given the top heavy nature of the division, the Rangers would still likely be in the playoff hunt. But no other Ranger skater has been worth four wins in barely half a season. If we assume this continues, then it’s eight wins and 16 points in the standings. Again, not an exact science, but paints the picture to his worth to the Rangers. There’s a chance those 16 points are the difference between first in the division and not making the playoffs.

The problem with the Hart is that it seems to be a points driven trophy. Connor McDavid is on a 130 point pace. Alex Ovechkin is going to break 50 goals this year, possibly 60 if he keeps this up. Will the voters be distracted by those gaudy totals, instead of looking at the definition of the award itself. Is either of those players actually more valuable to their team than Shesterkin? McDavid has Leon Draisaitl. Ovechkin has a loaded Caps team that was playoff bound anyway. Who else is there?

For a goalie to win the Vezina and the Hart, a lot of stars need to align. Shesterkin is taking care of many of those stars himself, as he’s quickly becoming the runaway candidate for the Vezina. But the Hart is a different animal, given the scoring bias. It’s safe to assume that if Ovechkin hits 60 goals, he’s going to win it. Ditto McDavid and 130 points, but that’s a little less clear since Edmonton is outside the playoff hunt in a very weak division. But again, is either the main reason for their team’s success? It’s hard to look at the NHL and find a player who is more individually responsible for his team’s success than Shesterkin.

It’s a rare feat, for sure, but as of now, Igor Shesterkin should be the front runner for both the Vezina and the Hart.