Can the Rangers make a deep playoff run with their poor even strength play? 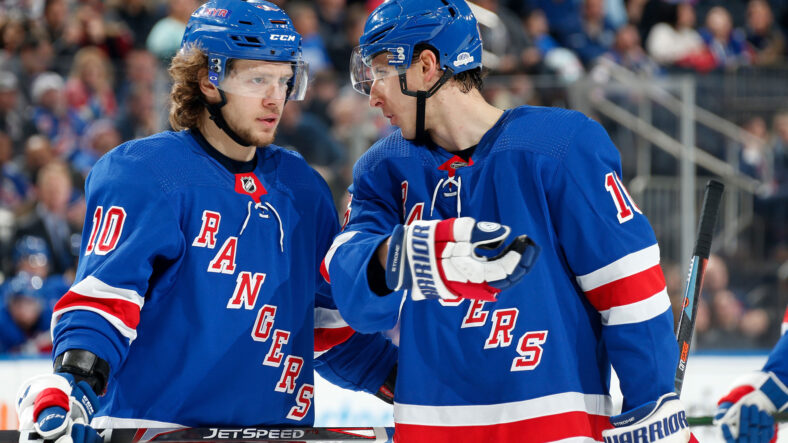 Despite being at the top of the standings, a Rangers playoff run still seems like a long shot. The Blueshirts are a top special teams club with elite goaltending, but struggle mightily at even strength. Since the majority of the game is played at even strength, that’s been the focus. The general consensus is that without solid 5v5 play, the Rangers will be exploited in the playoffs. There’s always hope, and the counterpoint is that Igor Shesterkin can carry the Rangers through a playoff run.

The Rangers, as it stands today, are 25th in the NHL with a 46.38 expected-goals share. Breaking it down further, they are 28th in the league in xGF/60 with a disgusting 2.17, and carry a better, albeit slightly 2.51 xGA/60 (20th). They’ve also been a tale of three distinct sections of the season, making this team a little bit trickier to evaluate based on just their season long numbers. 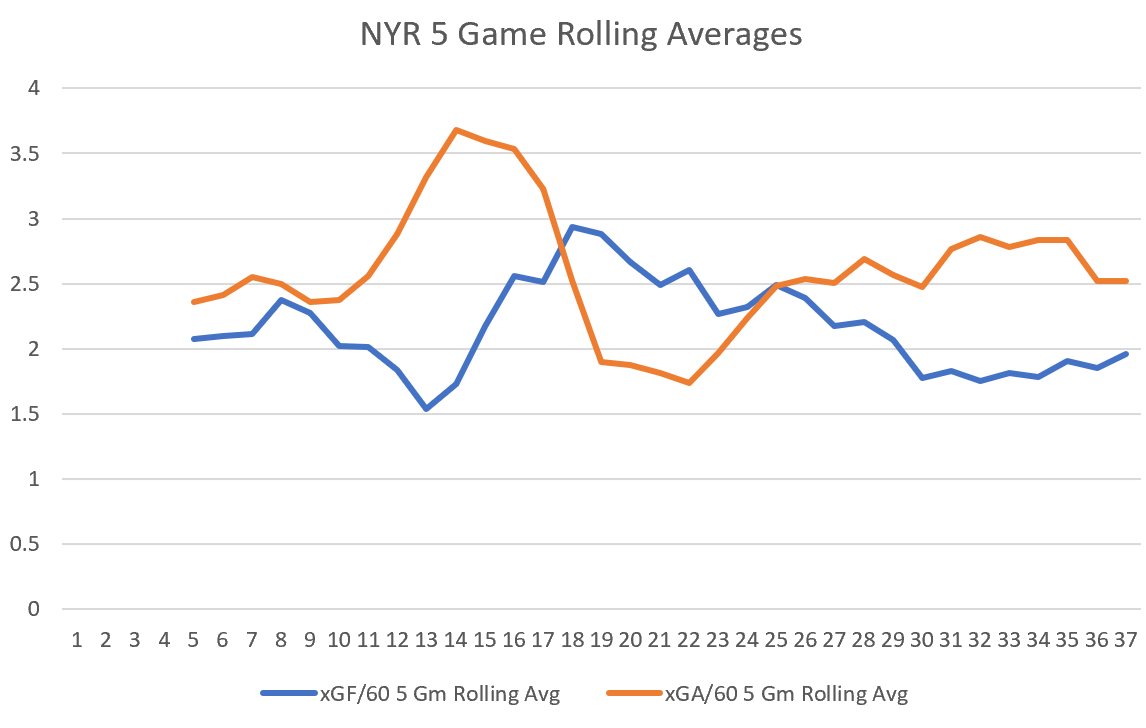 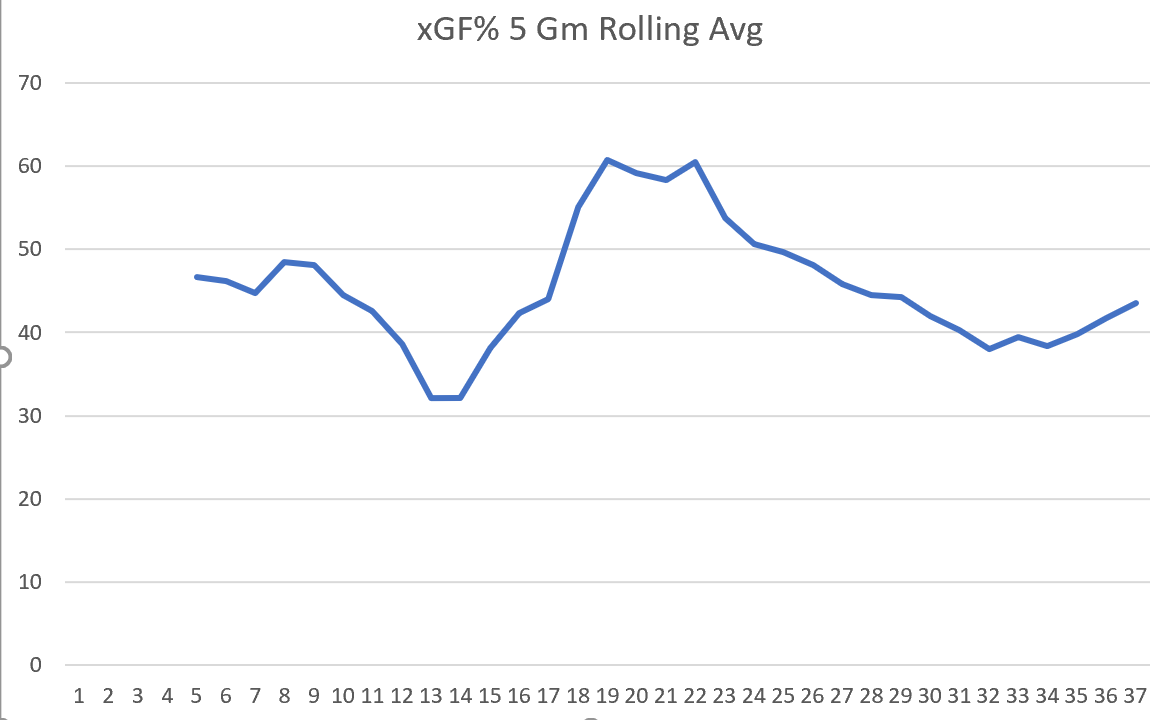 The Rangers were not a good team to start the season, and I don’t think many would disagree. They won because of goaltending. But right around the beginning of November, they appeared to figure it out. Their xGF% and xGF/60 numbers climbed, while their xGA/60 numbers fell drastically.

The Rangers peaked around game 23, which was the 12/4 game against Chicago, at least per xGF% rolling averages. If you look at the splits, we started seeing that xGA/60 creep up and get above the xGF/60.

There are two things we are looking for from the Rangers: More sustained offense, and better overall team defense. Now a grain of salt is required, as Covid has impacted a lot. But the overall themes for the Rangers have been there all season. That stretch of good play seems like the outlier, not the norm. Based on this, a deep Rangers playoff run seems improbable, and requires Shesterkin to stand on his head for 16 wins.

To see where the Rangers currently rank among prior Stanley Cup champions, I pulled the information from Natural Stat Trick, using 5v5 score/venue adjusted data.

The results are about expected, and they aren’t a good thing for the Rangers. Aside from the 2017-2018 Washington Capitals, who were in the bottom third in the league in possession metrics, all of the past Cup champs from the last decade had at least one metric in the top-ten. Chicago in 2014-2015 wasn’t overly good, but they had a good and consistent offense.

Another big thing for that Caps team? A PDO of 1.020, led by a 9% shooting rate at even strength and very strong goaltending. So the Caps turned it around defensively and had their skill players come through.

Is a deep Rangers playoff run even possible?

At this point, the Rangers need to mimic the Caps to make a run. The Caps didn’t do much at the trade deadline, just adding Michal Kempny to their blue line. So they went in with their existing roster. To be fair, that roster was deeper than the Rangers’ current roster, so it’s not a direct comparison.

The struggle with the Rangers is on the offensive side of things, not the defensive. Outside of the Kreider-Zibanejad-Kakko line, there is no sustained offensive pressure. The second line, as talented as they are, are one-and-done in the offensive zone.  The third line creates pressure but can’t score. The fourth line started hot, but has been a liability. While the recent games have been decimated by Covid, these issues existed before the taxi squads were re-introduced.

The Rangers won’t be able to mimic the Caps if Greg McKegg is dressing as their 3C. That’s not a bold take, it’s just facts. Once (If?) Covid protocols eventually go away and the Rangers get healthy, they are still going to have the same issues, as they lack a true 2RW, they don’t know where Filip Chytil should play, and as much as we love Ryan Reaves, he shouldn’t be an everyday player.

Thus, the Rangers need to figure out that 2RW spot in the short term. Is it Alexis Lafreniere? Does Chytil deserve a shot? or do they need to go outside the organization? The Blueshirts need Ryan Strome and Artemiy Panarin to produce more than just a one-and-done in the offensive zone at even strength. They are too good for this, and they need a good complementary RW that can create space and retrieve pucks.

Regardless of how the 2RW spot is handled, the Blueshirts still need  at least one, probably two, top-nine pieces to start pushing others out of the lineup. The best fourth line the Rangers had was Goodrow-Rooney-Hunt, and that is likely their ideal fourth line. Reaves would be rotated in as the 13F. But until Goodrow and Hunt are on the fourth line, instead of the top-nine, the Rangers are going to have these scoring issues.

One last bit, and it’s something I’ve really beaten to death in the last few years. That is trends matter. Season long numbers tell one story, but trends show how a team is playing at a current point in time. This year’s version of the Rangers will not have good season long even strength numbers. It’s just too late in the game and they’d need to pull a serious 180 to get in the top-ten in the league in any category. But they don’t need to do that, and it doesn’t mean a Rangers playoff run is out of the question.

This Rangers team is *far* more talented than that version. Starting to play like it is one thing. Making those roster adjustments is the other thing. This team, as currently constructed and playing like they currently are, won’t go far. But there’s still 40+ games left to get things together. They need to be better, but this is still a step forward for the team.