BSB Roundtable: What is the ideal Rangers lineup? 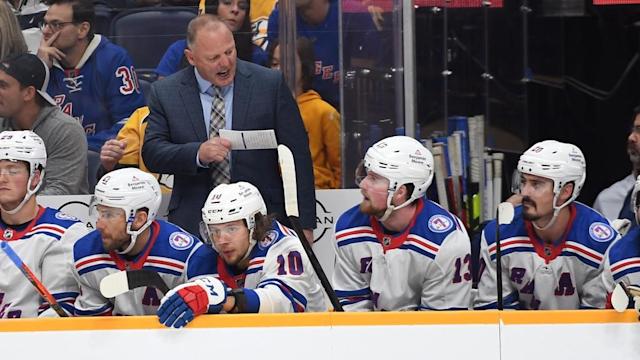 It’s no secret that the Rangers are struggling at 5 on 5 this season. Unfortunately, this is not a new problem for this franchise. The Rangers have not had a season where they’ve posted above a 50% Corsi or Expected Goals share at 5 on 5 since 2014-15. Coaches, players, team presidents and general managers have come and gone in that time, but the issue remains: The Rangers are constantly chasing the puck, and conceding more scoring chances than they are creating. This is not a recipe for winning hockey in the short term, nor contention in the long-term.

While the Rangers had been winning lately despite these issues, it all came crashing down to earth with Thursday’s 5-1 loss in Las Vegas. Losses like that are usually enough to force the head coach’s hand into some overdue lineup changes. With the team’s struggles mainly on the offensive side of the puck, the staff here at BSB took a stab at putting together their ideal Rangers lineup. These lineups include only players on the current active roster and taxi squad.

Balance is the key to everything. A guy like Kakko needs the puck, so it does no good for him to be with Panarin and Strome, who also need the puck. Gauthier gets his ass to the net and would thrive with those two. Barron I need to see prove himself before he moves up the lineup to 3rd line. Fox/Miller and lindgren/trouba cause Luker is my guy.

The struggle, per usual, is balancing what the Rangers should try to do with what they will likely do in reality. While Kakko with Zibanejad and Kreider has certainly worked, my main concern is balance, and for all the offseason talk about someone shifting to RW to help find that balance, we really only got about a 6-7 game experiment to start the season with Kreider at RW. Kakko has played well too, so he could maybe spark Panarin again. Goodrow has admittedly played well as of late, so he can take 3LW while Hunt can help out the 4L (the key being to scratch McKegg ASAP).

Say it with me now: if 79-23 & 55-8 doesn’t work, they can always go back. Lundkvist should be cemented into the 3D slot at this point, meaning the key here is to be rid of Hajek. Jones has looked fine, and while it’s fair that Jones & Nemeth probably trade in and out, Nemeth did have that good run of play before Lundkvist got sick.

I’m assuming that Kravtsov is off limits and no other transactions can take place. Even though he would be playing out of position, I think it’s time to give Lafreniere a look with Strome and Panarin. The gas seems to be running out of the Lafreniere – Chytil – Gauthier line, so I want to get him as much ice time with elite players as possible.

I could be convinced to slot Barron in full-time to see how he looks, but I like the idea of easing him in and plugging him in for Reaves/Gauthier, depending on the opponent. This gives the most defined top 6/bottom 6 this lineup allows for, and I think will help evaluate the top 9 options available at the deadline.

On defense, I wanted to break up Miller – Trouba, and given the Rangers’ aversion to an all rookie Jones – Lundqvist pairing, I’m also trying to balance a size/physicality player with a puck mover. I think Jones and Lundkvist are smart enough players to cover for some of the more reckless tendencies of Miller and Trouba, and those pairs can share more or less equal ice time behind the bigger minutes of Fox/Lindgren. This pushes Nemeth back to 7D, which is a huge upgrade on Hajek/Tinordi, who should both be fired into the sun.

This is a lineup I truly hope we see at some point soon for the Rangers. That top line has really been coming together recently so I wouldn’t change a thing there but the second line needs a revamp. I like Barclay Goodrow, but he isn’t a top-six forward and Alexis Lafreniere has done more than enough to stay in the top six once Artemiy Panarin returns. Gallant has been hesitant to try Lafreniere at RW again but I think it really should be explored. Morgan Barron deserves his chance and this also gives the Rangers a chance to see Chytil on the wing more before they make a (trade?) decision. Splitting up Lindgren and Fox might be sacrilegious to some but Rob Luker has convinced me that 79-23 and 55-8 could be even better. This is a lineup that isn’t safe for sure but it gives some of the kids more chances to shine.

My thought process here is to optimize the top six, and hope that Barron adds a bit of a shooter to the third line while Chytil and Gauthier continue to drive play. As much as I love Reaves, Hunt is the better player and makes that fourth line much more useable.

As for the defense, it’s about playing your best players. Since Gallant doesn’t want to break up the top four, you go with your next best duo and hope it works. Given how good Jones and Lundkvist are, they should be fine. Not without mistakes, but able to hold their own.

If it ain’t broke, don’t fix it. This is one of the better first lines in the conference.

Panarin and Strome are great at transitional offense, but neither track back and support our D, nor do they muster much forechecking ability. I think it’s important to have a RW with these two who can do the latter while also providing some pop offensively. Ideally, we’d have someone with a little more skill in the RW spot than Goodie, but for now he’s it.

To me this is the revamped kid line. Barron at lower levels gives you a two-way presence, maybe he can do that in the Show. Gauthier provides some skill and some jam. I’d shelter this line with frequent OZ starts and keep them away from the opposing team’s top 6.

I’ve been saying it for a while. Chytil is a winger. He’s doesn’t provide much defense and he seems to gravitate towards the boards in open play, rather than attacking the OZ with mid-ice entries. I’m not sold he’s an NHL player at this point, so let the 4th line be a trial run before he’s sold to the KHL. R&R are exactly what a 4th line should be composed of.

Best tandem in the league. I’d never break them up.

These two have brain farts defensively, mostly because the org hasn’t decided what type of defensemen Miller should be. I’m in the camp of letting him mature into a fluid offensive defensemen. Let Trouba hang back and do the dirty work.

Obviously, Nemeth needs to be replaced at some point, but I’m not comfortable with two kids learning to play defense playing together. Lundkvist has a great first pass, but little else at this point. Jones is inconsistent. Let them battle it out.

This is Filip Chytil’s last stand. He gets a prime opportunity next to two of the best offensive players in the game to prove he can add value and production to the top half of an NHL lineup. It’s a big change, but this offense needs a shake-up, and everything else seems like a half-measure. This is also no slight to Lafreniere; rather, it maintains continuity playing with Barclay Goodrow, with whom he’s developed some solid chemistry lately.

In contrast to most of my colleagues, I’m choosing to leave the defense pairs unchanged, and banking on Patrik Nemeth to regain his pre-Rangers form to solidify the third pair.

What is your ideal Rangers lineup? Let us know in the comments, and maybe we’ll see one of these alignments tonight in Anaheim.