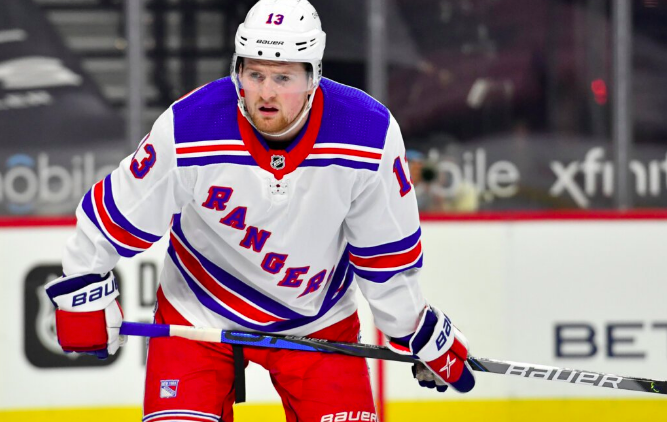 As the Rangers move closer to the top of the Eastern Conference, fans can be cautiously optimistic that that ‘experts’ pre-season predictions were thankfully grossly miscalculated. Few thought a young, rebuilt squad would be this good this early at this life stage. Another expectation that also seems to have been shot wide is the production of Alexis Lafrenière. The 2020 1st overall pick came into this league with a mountain of expectations after he absolutely dismantled the QMJHL in ways not seen since Sidney Crosby or Claude Giroux. Yet here we are, talking about Lafrenière’s struggles to start his career.

While it’s still too early to sound any alarm bells over the 20-year old’s lack of production, I think it’s fair to start diagnosing his play and proposing some solutions.

To date, Lafrenière has competed in 80 NHL regular season games. In that time, he has put up 17 goals and 27 points. Other than Jack Hughes, there aren’t any 1st overall picks over the past 15+years that have come out of the gate with such a whisper offensively.

Certainly, Laf’s 13+ mins a game isn’t going to launch him into the upper echelons of the league’s offensive leaders. And obviously not being on the first PP unit isn’t going to help either. However, I still find many aspects of his game needing more seasoning, which will indirectly impact his ability to get going offensively and contribute to his struggles.

Lafrenière’s struggles in the defensive zone

One of the first areas of the game Laf needs to improve upon is the defensive side of the puck. Backchecking, reading the rush, positional awareness, and stick work are all things I’ve noticed he’s not consistently doing correctly.

Point in case, last week during the Rangers / Flyers game Laf made two mistakes on one sequence that ended up leading to a goal against. First, when he tracks back, he comes too deep into the defensive zone, which leaves the high slot (his responsibility) wide open.

The second mistake is when the puck ends up just off the half wall. His eyes are glued to the puck and he never checks to see Frost streaking into the slot. That error leaves our d-man in the crease to tie up two enemy forwards. That’s a basic defensive error and one that will drive coaches mad.

Alex Ovechkin scores his second of the game, goal number 732, moving ahead of Marcel Dionne on the all time list. pic.twitter.com/zmXurlj5lL

On this sequence against the Capitals, Lafrenière is hovering mid-ice coming over to support the play on the wall. The problem here is his stick is facing up ice even though the play is coming towards him. While van Riemsdyk makes a great pass to Ovechkin, had Laf’s stick been on the ice facing his own end zone, he might have been able to tip that pass and prevent that goal.

The other thing I’m noticing is a bit harder to quantify or qualify, so bare with me. When I am at games, I’m always zeroing in on guys off the puck, since the broadcasts rarely pick up the weakside of the ice. This is where you identify potential concerns, and this is where we see more of Lafrenière’s struggles.

I’ve noticed he just doesn’t seem to play at the same pace as everyone else on the ice, particularly late in shifts and late in games. Initially I thought he was playing injured, but the more I watched him the more I noticed he kind of hunches over a lot and loses his posture in stride. It might be his conditioning isn’t where it needs to be to play at this level quite yet or his skating could use improvement.

And just like that, Jesse Puljujarvi scores his second of the game to tie this 4-4. pic.twitter.com/cpwVCEa0jt

This is the only clip I could find that kind of illustrates my point. Notice Laf in the center of the screen. He’s late to his areas of the ice and just seems hunched over. Maybe I’m crazy, but it’s something I notice with Brian Boyle back in the day and he ended up seeing a power skating coach in the offseason. 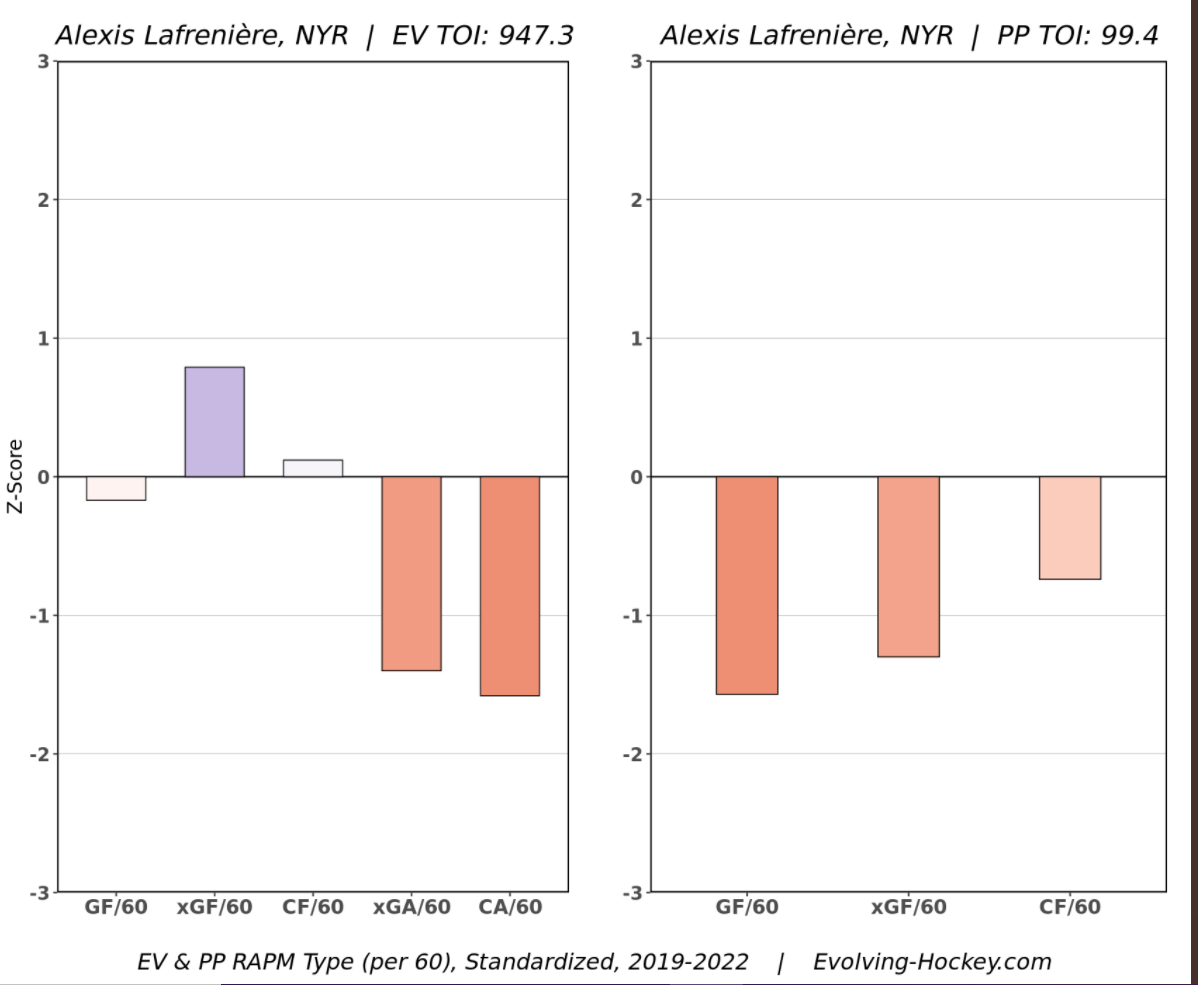 If RAPM is over your head, Natural Stat Trick also has is on-ice xGA / 60 mins this season at 2.7. That’s among the worst on the Rangers, and checks out given the defensive issues noted above.

When young players are struggling to learn the subtleties of the pro game, there are a few options you have to help develop your talent.

There’s a myriad of variables that affects which option you go for (e.g., salary, role on the team, player’s ceiling, etc.). In the case of Lafrenière, it seems the organization has opted for option 1. That’s fine for now. However, if he doesn’t improve in the aforementioned areas, I wouldn’t be against sending him down.

The fanbase probably wouldn’t like it and the media would most likely frame a demotion negatively, but it’s a strategy that has worked for most North American prospects. The question is, would Drury have the cojones to do it? We shall see.