Rangers Game Thoughts: The Upside Down 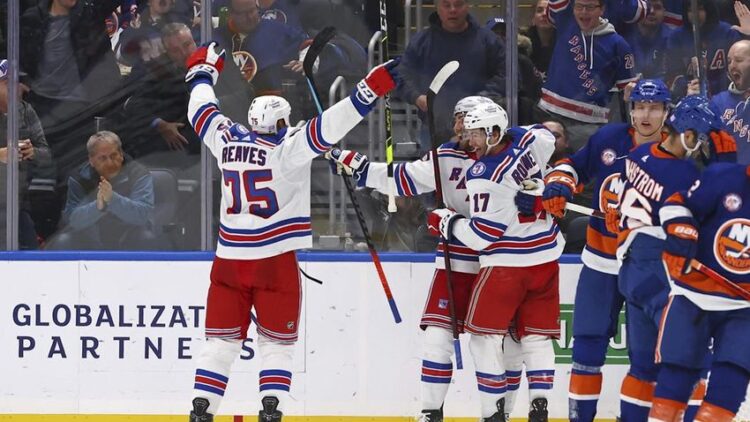 A so so start turned into quite the hockey game at the start of the second period as the Rangers fourth line decided they were going to show tonight they are indeed the best fourth line in New York. For all of the narratives that existed going into this season with how the Rangers would get embarrassed, they took care of business.

COVID aside for the Isles, this is what the Rangers need to do when the Islanders are down, bury them. As it stands after this game, the Rangers are 15 points ahead of the Islanders in the standings. Those stolen wins in the beginning of the season are proving to be vital as the Rangers are now a machine that understand how to play in Gallant’s system.

What are they feeding this guy Chris Kreider this year? He keeps this up, he is my favorite for the Calder trophy (bad joke, sorry). He continues to be elite on the power play as he’s now tied with Leon Draisaitl –at the time of this article– for the lead in power play goals in the NHL. If he doesn’t score 30 goals somehow this year, it’s going to be horrific.

He has 15 goals in 19 games this season and is scoring primarily at the net-front on the power play with some unreal tip-ins. He is well on pace to score 50, it’s great to see that he has found consistency every night now.

Speaking of consistency, it can’t be understated how good Kaapo Kakko has looked as he notched another assist tonight on the second Kreider goal, extending his point streak to 5 games. Just goes to show don’t judge a young player on his first 10 games.

Kakko has been an absolute monster after getting the secondary assist on the Lafrenière goal against the Devils 10 days ago. His underlying numbers have shot up in a positive direction, and his two-way play is even more highlighted because his defense is turning INTO offensive chances. He isn’t just entering the zone and holding up at the half-wall turning the puck over, he’s making some plays with the puck on his stick. It’s a great sign to what this team is trying to achieve in developing their talent, and simultaneously compete for the playoffs.

Another strength of any good playoff team is having an effective bottom six, and boy do the Rangers have just that. Not only is the fourth line arguably one of the best in the NHL at generating offensive zone time, but they scored two big goals tonight. How Ryan Reaves dangled an Isles defender and threw a backhanded cross-crease pass to a wide open Kevin Rooney is beyond me, but that player needs to retire now, I don’t make the rules.

Gerard Gallant called the line the “key to our win tonight” and it’s tough to disagree with that. Kevin Rooney with his first 2-goal game and Ryan Reaves with his first 2-Assist game in their careers. Best 4th line in New York and it’s not up for debate.

Last note on the night, it is hilarious to me that Ryan Reaves had a multi-point game, and Alexis Lafrenière got assessed his first fighting major as he beat up on JG Pageau for a questionable hit on Ryan Lindgren, and after he took a chop at Lafrenière. We were in the upside down last night.

I have no problem with Lafrenière doing that either every once in a while. What’s better than a player you don’t expect to drop the gloves, but actually knows how to fight? But hopefully when these teams play each other on Sunday, Reaves will dance with someone instead. Until then, from myself and the rest of us at Blue Seat Blogs here, hope you have a wonderful Thanksgiving with your family, friends, and/or loved ones. See you Friday for a hopeful beatdown in Beantown!