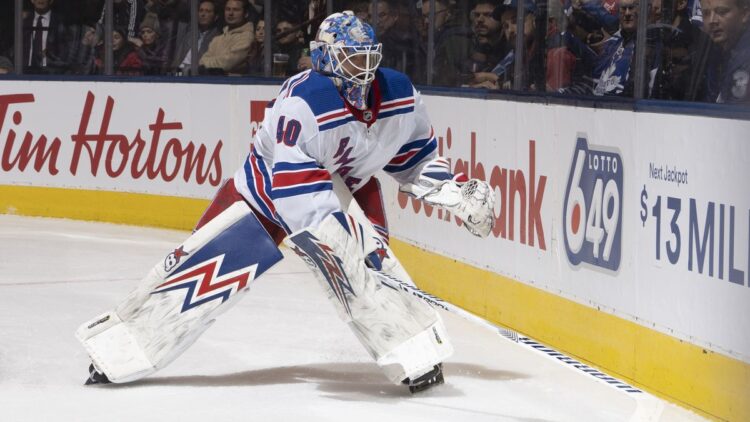 With Alex Georgiev continuing his pretty rough play of late, there have been calls to send him down to Hartford. Some of this came from Steve Valiquette, who on the post game of the win over Buffalo said he could probably use a confidence boost from the stint in Hartford. Others are nowhere near as kind, saying he shouldn’t even be on the team. But there are consequences with sending him down. For starters, would Alex Georgiev clear waivers?

Looking at the player himself, there’s no denying Georgiev has had a rough start. He’s also been declining rather rapidly since his first season in New York. He started at a .918 SV% in 10 games his first year, and has dropped each year before this year’s .858 SV%. 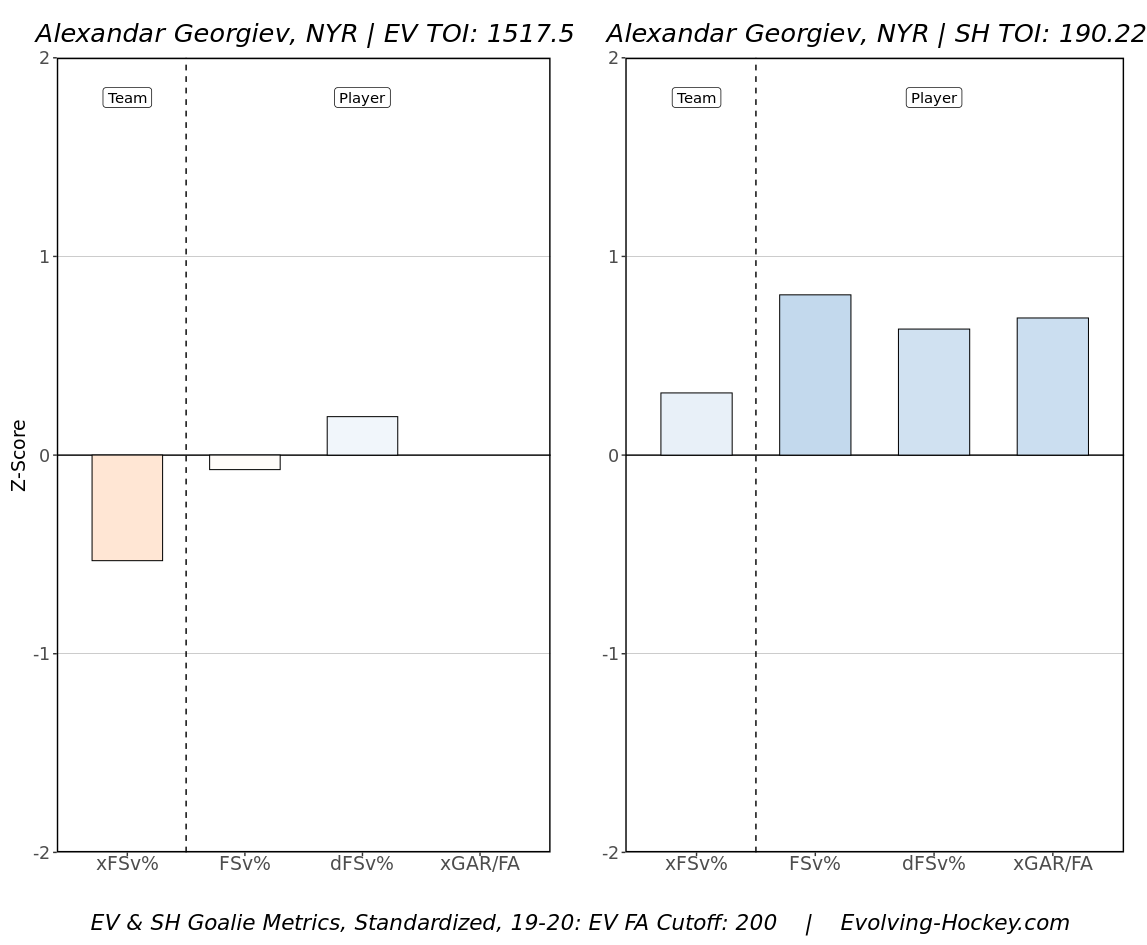 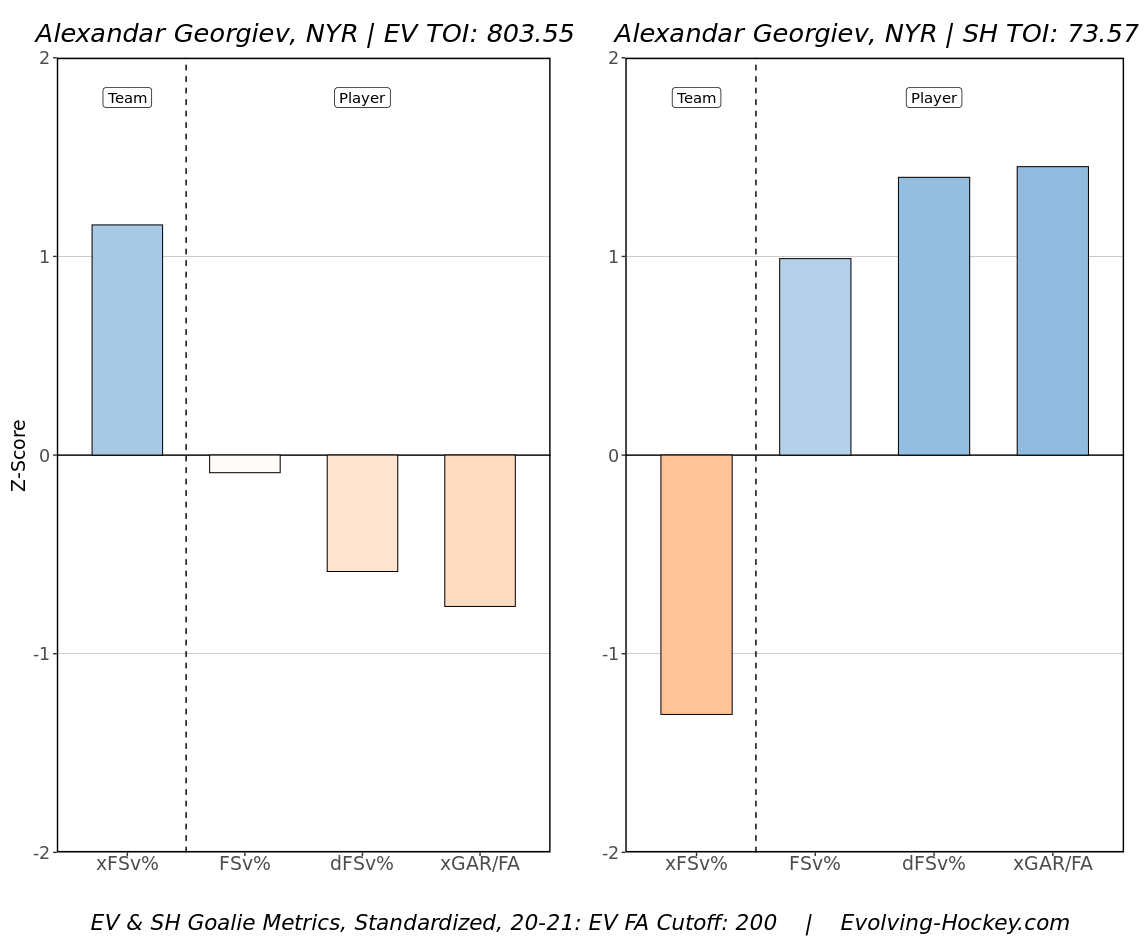 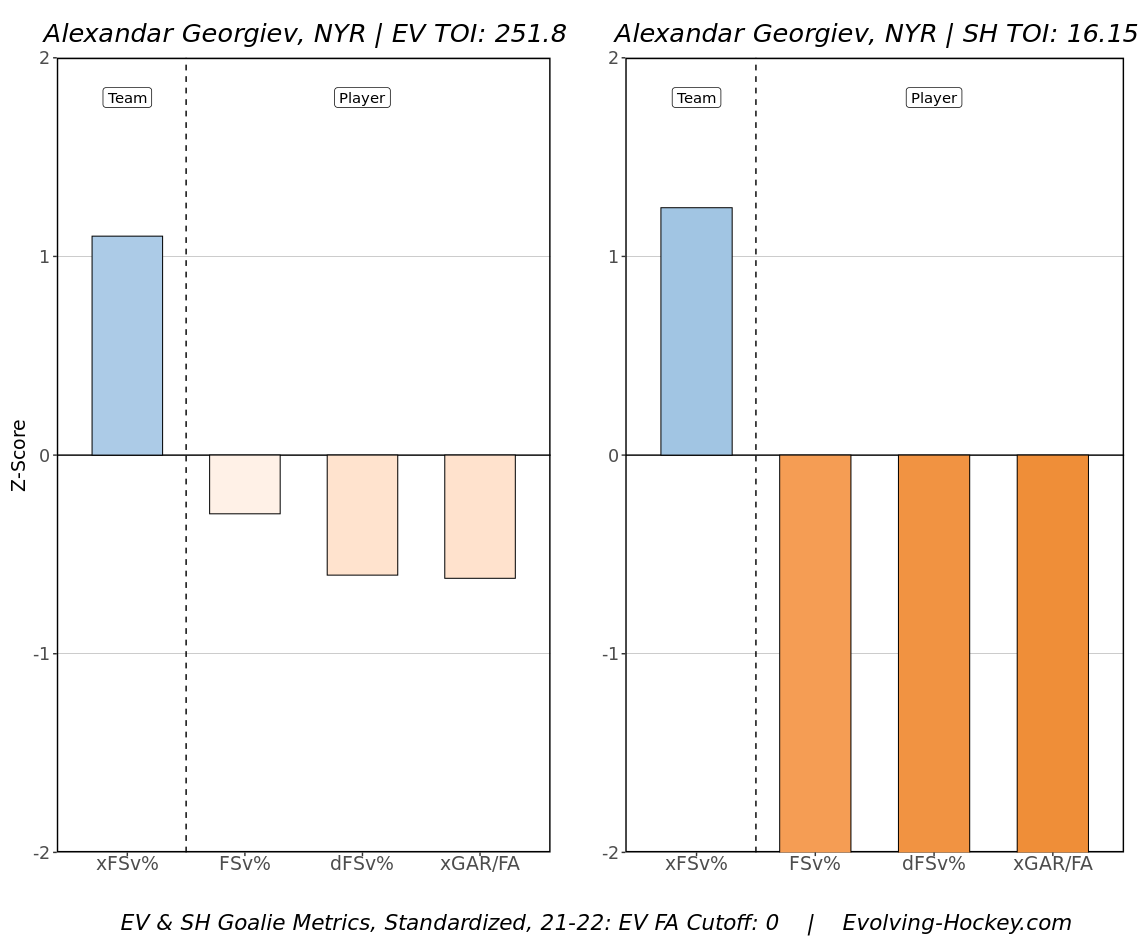 His numbers in years past have usually been propped up, for whatever reason, by shorthanded play. He was rather stellar. However this year, mostly due to the opener in Washington, his numbers are off the charts bad (small sample size, 16 minutes). His even strength numbers, while never great, were at least league average two seasons ago. But they’ve been declining since. Factor in his $2.425 million salary and matching qualifying offer as an RFA, and his contract may not look too good soon.

The million dollar question is will Alex Georgiev clear waivers if sent down. The answer among Ranger fans seems to be an emphatic yes, but mostly because of extreme recency bias. What isn’t being factored in is Georgiev is 25 years old, relatively cheap, and has at least some prior success in the NHL. Teams looking for young goaltending will likely take a long look at him.

Buffalo, for example, just started Aaron Dell in net on emergency loan. Their roster goalies are Craig Anderson and Dustin Tokarski. You’re tell me they, with all their cap space, won’t take a flier on a 25 year old goalie for no cost other than dollars? They also have the added benefit of adding cap floor cushion for their inevitable trade deadline sell off.

Arizona is another team that likely wouldn’t let Alex Georgiev clear waivers. Karel Vejmelka and Scott Wedgewood is their dynamic duo in net, with Carter Hutton on IR. Same process for Buffalo applies here. Why not take a flier on a 25 year old goalie for free? He’s shown he can be an NHL goalie in the past.

There’s a market for a 25 year old goalie who seems to just need a confidence boost.

What would the Rangers do for a backup?

The Rangers have played 18 games, and Igor Shesterkin has started 13 and appeared in 14 of those games. For workload management, you figure a starting goalie should get about 60-65 starts over the season. Using that logic, the Rangers will need a viable backup that can start about 16 of the remaining 64 games (25%). The keyword is viable.

As much as we love Keith Kinkaid, he’s not the answer at the NHL level. Kinkaid hasn’t posted a SV% over .900 since 2017-2018. If you don’t think Georgiev is the answer, just know that Kinkaid is likely a step back, and at the best a sideways move.

Adam Huska, who struggled mightily in the AHL over the last two seasons, has finally found some success. Is the best move to uproot him just as he’s gaining much needed confidence? This isn’t a Mackenzie Skapski in Buffalo situation. This is 16 games against legitimate NHL teams. It’s best to let him grow in Hartford.

So what’s the best solution?

Perhaps the best solution is to just let goaltending wizard Benoit Allaire work his magic on Georgiev. The skill is there, and this appears to be a confidence issue. It’s very obvious what Georgiev has done isn’t good enough. They can’t ride Shesterkin into the ground, especially with some lingering groin concerns.

Adding onto this, the Rangers do have about 10 days before their next back to back, which is likely the next time they’d need Georgiev. Does a conditioning stint in Hartford make sense? It’s certainly an option, and at least a creative one. It’s safe to assume Shesterkin would get both Isles game and the Black Friday game. I’m not well versed in the paperwork of it all, and whether the Rangers can call up Kinkaid to serve as the backup. I’ll assume they can work it out.

Unless the Rangers can find a viable backup goalie elsewhere, and the trade market is really the only place at this point, then they may be “stuck” with Georgiev until the end of the season. It’s highly unlikely they’d give him a qualifying offer at $2.425 million though. No matter which way you slice it, this is likely Georgiev’s final season in New York.