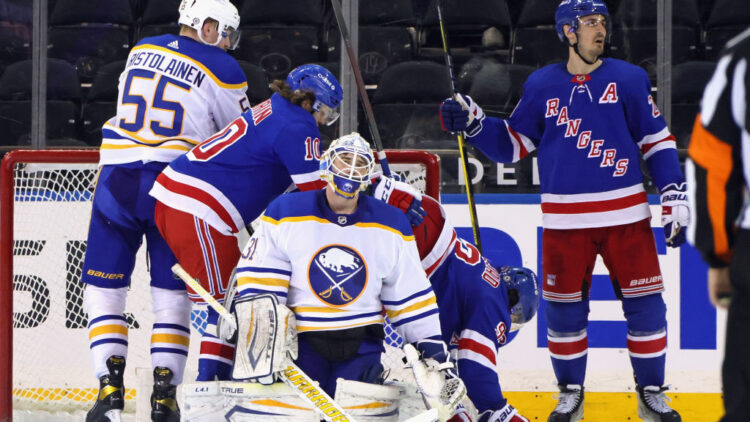 NEW YORK, NEW YORK – MARCH 22: Chris Kreider #20 of the New York Rangers (r) celebrates his second goal of the game at 5:47 of the third period on the powerplay against Dustin Tokarski #31 of the Buffalo Sabres at Madison Square Garden on March 22, 2021 in New York City. (Photo by Bruce Bennett/Getty Images)

What a game for a Rangers goal breakdown. After an uneventful first period where both goals were on the powerplay, the teams combined for six goals in the second, four of them coming in one minute. This wasn’t the best goaltending clinic either, with both goalies allowing some pretty bad goals. But this track meet was incredibly one sided, as the Rangers crushed Buffalo in every aspect of this game, except on the scoreboard.

Seriously, the Rangers had a 98% expected-goals share in the third period, and over 75% for the game. That’s absolutely nuts, and I don’t think I’ve ever seen anything like that before. Then the last second goal (0.4 seconds left) by Ryan Lindgren on one of the prettier passing plays, just amazing. There are few games were you feel like you dominated, know you dominated, but the score is close. This was one, and the Rangers got the win.

Bad penalties will do this to you. The Rangers took a bad penalty, and the Sabres scored on the powerplay. There is nothing wrong with the PK coverage here, they had more bodies than the Rangers. That’s how it works.

Rangers 1, Sabres 1 – The powerplay bails them out

Focus in on that Panarin primary helper to Kreider #NYR pic.twitter.com/ufY5GeHzq5

Chris Kreider got his 13th, eight on the powerplay, off this incredible feed by Artemiy Panarin. Kreider found the soft spot in the coverage, and the Sabres still had sticks in the lane. That’s how good Panarin is.

That's a real tough read by Tinordi that directly leads to a goal against scored by Hinostroza. The #Sabres are back in the lead, 2-1 #NYR pic.twitter.com/99dmzUSpLu

This is a bad read by Jarred Tinordi.

if that didn't go in… pic.twitter.com/a2OVmz1Zkp

The Rangers had the extra skater for what felt like five minutes, which was a clinic on the delayed penalty. Eventually, Panarin put the puck on net with Jacob Trouba crashing.

Rangers 3, Sabres 2 – Kakko is turning it up

Kaapo Kakko from Ryan Strome and Artemiy Panarin puts the #NYR ahead 3-2 pic.twitter.com/STHeVhfVO2

What a team goal here. Adam Fox and Ryan Lindgren force the turnover, and Panarin hit Ryan Strome for the zone entry with a long pass. Strome drew defenders and dropped to Kaapo Kakko, who made a nice little fake before burying it. Note on this one that both Kakko and Strome are on the strong side for the outlet. They outnumbered Buffalo, who only sent one to that side, leaving one in the slot –poorly positioned– and one on the weak side. Not the best defense from them.

At the risk of making Tinordi the whipping boy, Tage Thompson used him as a screen on this one. In Tinordi’s defense, there were two other bodies in front.

Alex Georgiev wants this one back. He’s been bad lately, and his body language says it all. Kid needs a confidence boost.

This is an innocent point shot by K’Andre Miller that had eyes. Good traffic in front.

With .7 seconds left, Ryan Lindgren scores to pull the Rangers ahead and clinch a regulation win #NYR pic.twitter.com/ufpkw99Gnm

What a goal to end it. Watch Ryan Lindgren creep in, knowing time was running out and Buffalo wouldn’t be able to get a chance the other way. The Sabres left one man out to contest three Rangers, and it wound up in the back of their net. 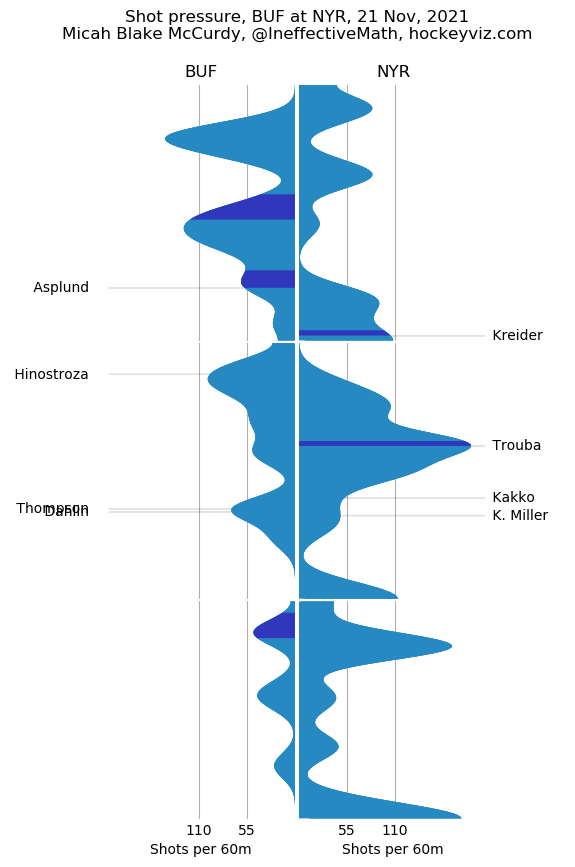 The Rangers owned this one. They steamrolled Buffalo in every aspect of the game except on the scoreboard.

Seriously, what domination by the Rangers.

The win was good, but the take away is the utter dismantling of Buffalo. This is how you roll into your next three, with two against the Isles. The Rangers appear to have turned a corner in process. Now it’s about keeping it consistent against good teams.