Rangers game thoughts: You can’t win them all… 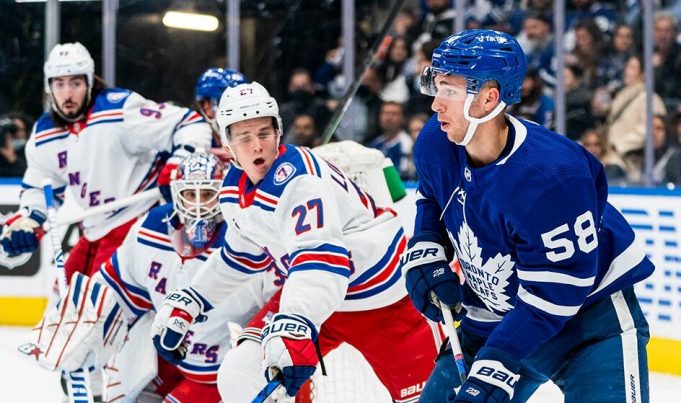 Rangers game thoughts from last night show they legitimately looked and played well against what many consider to be a top tier team in the Leafs, despite the loss. The Leafs are much different this year than in previous years. They don’t let you make plays in the neutral zone as in years past. They’ve really studied and bought into a defensive system that really traps teams like the Rangers who rely so much on passing through the neutral zone instead of skating the puck out. While the former has proven to give the Rangers good results over the last week, might need to make minor tweaks going forward knowing.

After two 2-1 games against Toronto, it’s clear their mission is to suffocate the top six of the Rangers. This calls into question then of course the question: can the Rangers depth take over when the top six is shut down the majority of the game?

The guys they have certainly are showing great signs of potential; especially Julien Gauthier. How and why was this guy scratched for so many games last year? He was really proving to be a play driver in this one. He created numerous chances in the offensive zone and had good stick work in the neutral zone to disrupt the Leafs from entering the Rangers defensive zone.  I thought for sure one of Lafrenière, Chytil, or Gauthier were going to score. That trio has been electric since Chytil came back.

Side note, good for Filip Chytil to pretty much get back right where he was before the injury with some underrated two way play. In the past, it has sometimes taken him quite a number of games to be at the peak of his game. He’s proven to be much more of a shooter this year too and that bodes well for a line that is expected to chip in often. This could be the reincarnation of the forever loved Brassard, Zuccarello, Pouliot line from the 2013-14 season.

Not to be negative in these Rangers game thoughts, but the Rangers absolutely should be in the mix for a play driving winger to play along side Chris Kreider and Mika Zibanejad. This Barclay Goodrow top line forward thing is not working out at all.

Of course let’s not forget the goalie as well, even though it was a loss, Igor Shesterkin played a great game. Both goals against were tough ones and scored by Morgan Reilly. First goal happened due to a massive screen by Trouba and Bunting battling in front of the net, and the second Reilly making a great move while on the power play in the second period. Sometimes good players beat good goalies.

After making so many good plays that didn’t show up on a scoresheet, Dryden Hunt finally scored his first off a great set play by Kakko shooting off Campbell to generate a juicy rebound and a wide open net. Don’t look now, but Kakko is on a 3 game point streak. The league has no idea what is coming…