Rangers never make it easy in 4-3 win over Panthers 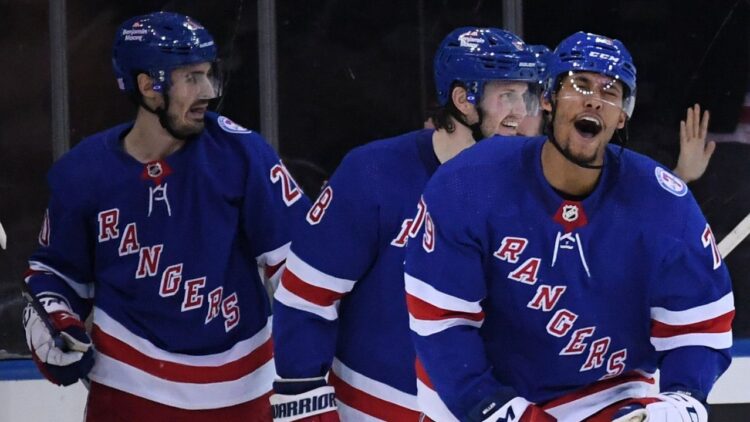 The Rangers never make it easy. Another nail biter, another game the Rangers had no business winning, another time they will take the two points. We are learning more and more about this team as they go, and it is clear they need more play drivers. What they don’t need is a goaltender though because holy smokes Igor Shesterkin is just incredible: 42 saves on 45 shots on 91 attempts by the Panthers. They are a legit playoff/cup threat this year.

First off, I am all for a shooting bender win. The Rangers tonight only had 18 shots on goal and won the special teams battle. You want to bank as many points this early into the season as possible, even if it comes ugly by eyesight. The Rangers might still be figuring out their system, but this was another game where Panarin, Strome, Fox, and Mika led the way for the offense. You want this.

Yes, the Rangers should learn to play like the Panthers and take 91 shot attempts of their own, but you want to see Mika and Panarin in particular getting on the scoresheet. Oh, and Chris Kreider is scoring 30 goals this year. That man is on a mission while he’s out on the power play.

Now, a note on the defense. Yes, this was the haven’t-lost-in-regulation-Florida Panthers–and they certainly put on a clinic in puck movement and finding the open man virtually anytime they were in the offensive zone–but it would be stellar if the Rangers had better defensive systems in place. This is now another year of bad defensive trends. The Rangers never make it easy.

For starters, last night was the 8th time in the last 9 games the Rangers have surrendered 30+ shots to their opponent. It was also the 5th straight game where the Rangers difference in shots from the opponent were 10+ shots. Yes, shots aren’t always contextually accurate, but it is telling that the Rangers preached this offseason that they wanted to be tough to play against, and they are getting skated out of the building most nights. So much for that, and the Rangers never make it easy this year. Makes one think that they are more than likely 2 or 3 pieces away from legitimate contention.

No Rangers executive is ever going to read this drivel, but can someone please try to get Kakko on the top line with Kreider and Mika to get him going? It was the right call, but they took a point from him away due to goaltender interference. Kakko can’t seem to buy a point or a goal right now; Spencer Knight even robbed him point blank. Right now, all eyes are on him and what he is supposed to be.

The Rangers have never made it clear what his role is. Is he a scoring forward (he should be)? Is he a grinder to make room for Strome and Panarin? Is he a top six player at all? Kakko’s confidence couldn’t be any lower as a player and it is showing in his play. Would be great if he could get some looks at the top line to motivate him. Even with player development, the Rangers never make it easy.

Good thing the Rangers are off until Saturday. Maybe they should take the much needed down time and work on even strength play, because they have been really unsettling and stale. Going into Columbus is never an easy game either. Yes, that team is re-tooling, but they did put up a fight the last time they played the Rangers at MSG despite getting shutout. Would not surprise me to see a much better defensive game from the Blue Jackets. Until then, enjoy the 2 points again.