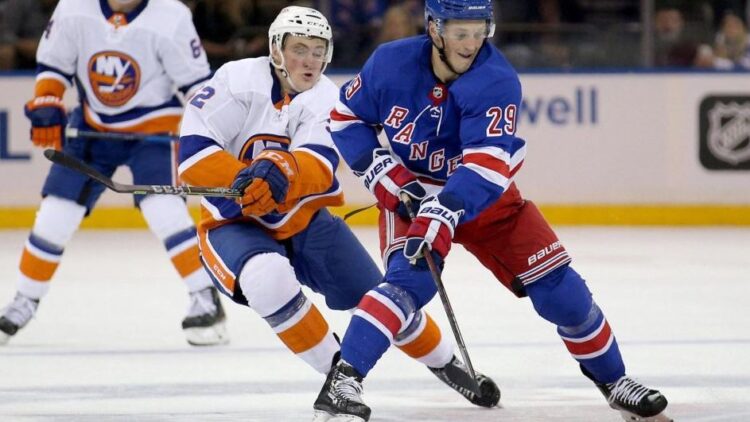 It’s been 10 games, so it’s time to review some of the underlying stats for some NY Rangers trends. Sometimes a common criticism of data-driven analysis is that it is lacking context of a certain kind. So in that vein I wanted to take a simple look at the differential between the shots for and against all the way back to the 1994 Stanley Cup Champion New York Rangers. 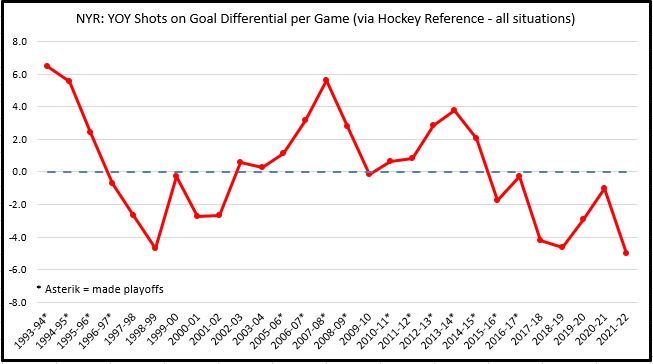 Shots on goal are certainly not all made equal and of course are not the exclusive way to determine if a team is “good” or not. With that said, humor me and allow your eye to track the relationship between the seasons where NYR was an above average (zero/blue dashed line) shot differential team and the years they made the playoffs (asterisk after the season). As with nearly any team sport: if you’re generating more shots and chances than what you’re giving up – you’re just a solid goaltender away from being pretty damn good (if that sport has a goaltender, I guess).

You may also notice that the 2021-22 team seems to be in a low spot when it comes to all situations shot differential, so how are the Rangers 6-2-1 as of 11/3/21? Well, they’ve got the two things that will keep most any team in a hockey game: a decent team defensive structure and some really, really good goaltending. 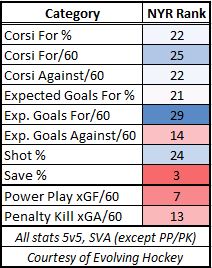 Normally I do not focus on special teams when analyzing an NHL team because only about 20% of a game occurs on the power play or penalty kill. Game to game and year to year special teams results sway wildly and therefore cannot be relied upon to consistently win hockey games. It’s also not fair to sell them short, because right now from an overall net expected goals standpoint the Rangers are about even when you look at all situations play. If you drop it to just 5v5 play, that’s when the worrying comes into play for the NY Rangers trends thus far. 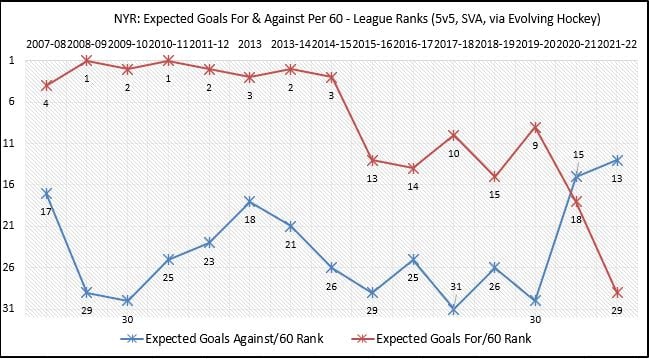 The balance between offense and defense has flipped for the Rangers in the last two years. The run of good seasons that NYR had in the mid-2010’s was led by offenses who would create a lot of chances and supported by Lundqvist cleaning up a lot of defensive mess. Overall the change is likely the result of a mix of the roster itself and coaching (Jacques Martin last year, Gallant & co. this year). The overarching point is that for the Rangers to be anywhere near consistently good this year, the forwards cannot be a bottom-ten shot & scoring chance (expected goals) unit. 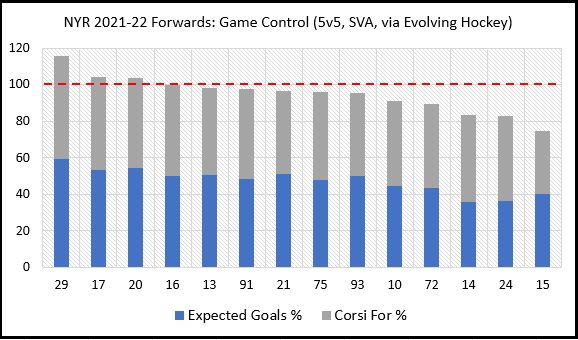 The above is a combination chart of each NYR Forwards on-ice Corsi (shot attempts) and Expected Goals (scoring chances) percentage. Reaching the 100 (red-dashed) line means that they’re likely out shooting & chancing the opponent while on the ice during 5v5 play.

The offensive issues so far for the Rangers mostly land with the middle six. Zibanejad and Kreider, regardless of the winger that completes the line, have typically been spending more time in the opponents zone than their own. Also, in a very MISSION ACCOMPLISHED manner, the fourth line with Hunt, Rooney, and Reaves or McKegg has been just fine or actually good – fly the banner Sather & Drury.

The primary concerns for the middle six are twofold. First, the Panarin-Strome-Kakko line simply has not worked well enough (or at the very least – consistently). Of that particular line I would look to Panarin and Kakko rather than Strome (for now), but overall it might be time to finally try breaking up 10 & 16, as the line has struggled to limit scoring chances against.

Part of the reason I propose that break-up again is because of the second issue, which is that Filip Chytil has had a mixed start to the season. He is creating an average amount of offense (relative to the other NYR forwards) but his expected goals against per 60 is the highest of all forwards with the exception of Julien Gauthier. The new line of Laf-Chytil-Blais is working for the moment, but I still wonder if a different balance can be found amongst the top nine. Let the proposals flow.

Defense pairs look good, for the most part 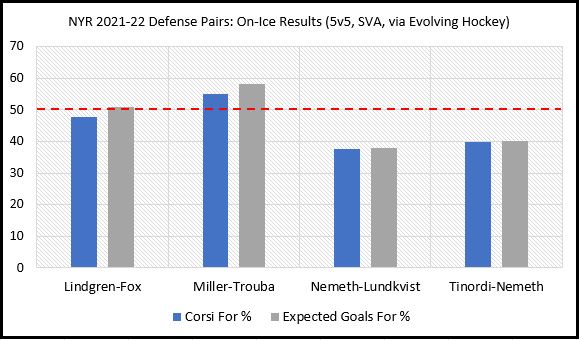 Unlike in years past, the Defensive pairs setup for NYR has been relatively straightforward. Even though Lindgren & Fox look as though they’re hovering around the 50% line, this is the result of a few unexpected poor games in the last two or three. Before that, they were around 55%.

Miller & Trouba, meanwhile, have had a strong start to the season. So far they have been able to shore up their true issue last year of allowing too many scoring chances against. Part of the reason why the NYR team defense looks decent to start the year is because this top 4 is playing about 75% of TOI during 5v5.

This brings us to the third pair, where nothing has worked yet between Nemeth, Lundkvist, and Tinordi. Again, the question of balance comes up – are NYR ok with running out a top 4 defense that can seemingly eat up minutes while risking a lower portion of that TOI to be yielded to the other team with the bottom pair? I spent a good part of last season and the summer advocating for Miller & Trouba to be broken up in order to find better balance, and I still think that should be considered.

There are only two other moves in my eyes for the third pair. The first would be to let Nemeth and Lundkvist have another ten games or so to see if they can find their footing. Nemeth has historically put up good defensive impact numbers (limiting chances against) and Lundkvist is still a rookie. The other option is to make actual roster moves, ASAP. This would involve sending both Hajek & Tinordi down while bringing up Zac Jones and/or making a minor move for a reliable seventh defenseman (such as Fredrik Claesson). If the Rangers offense does wake up and the playoffs become a reality, Jared Tinordi should be nowhere near actually having a chance to play in a game. 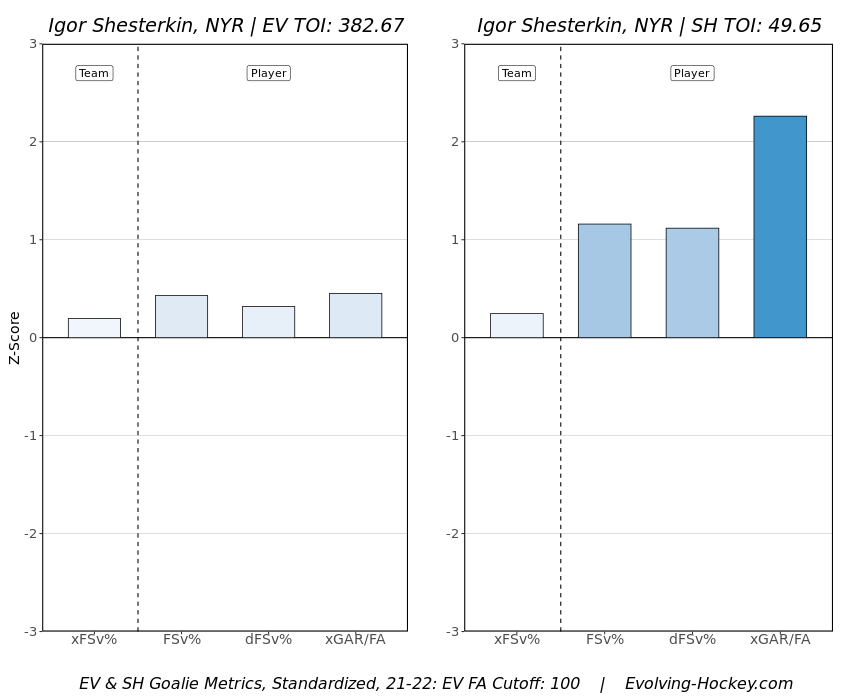 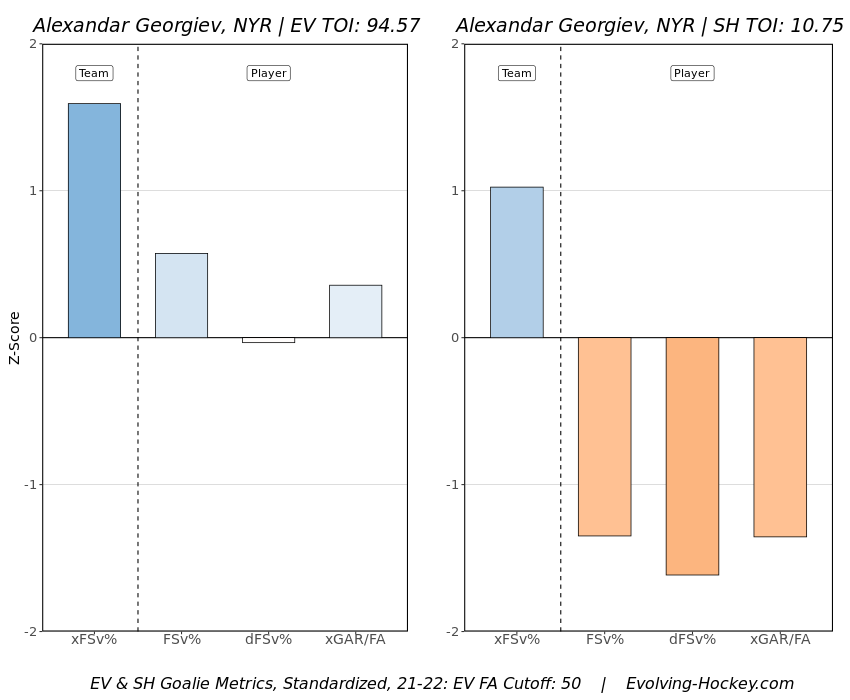 As always, the goaltending section of these writeups will be short and sweet. Igor Shesterkin is very good. Alex Georgiev, despite a poor opening night, has come back around to play well at even strength and poorly on the Penalty Kill. Now everyone please call your elder loved ones to keep the good karma up for Shesterkin’s health. 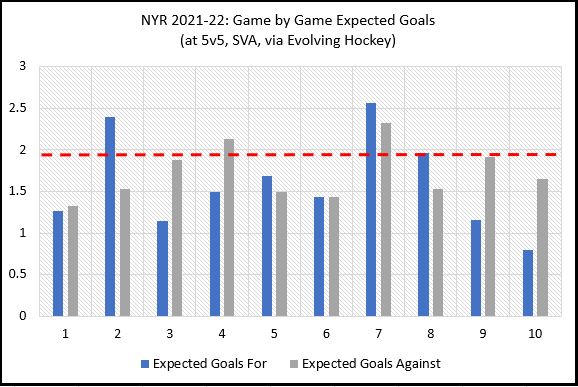 This last chart is to help us grasp some more context of the first ten games of NY Rangers trends. The red dashed line is the average expected goals for & against per game so far this season across the league. As you can see, NYR are playing lower-event hockey than in the past – only rarely breaking that line in either zone. While I don’t want to relitigate the offseason; this was part of the risk Sather & Drury took in removing a proven two-way player in Pavel Buchnevich (aka a slight lack of offense).

That being said, the bottom line at this point is that the seemingly talented youth (Chytil, Kakko, Lafrenière) and, frankly, Panarin need to elevate their play to help the Rangers create more scoring chances. Given last season and the individuals on the blue line, I am relatively confident in the defense compared to years past. The success of the season will likely rest with the Forwards and their ability to generate offense, because without it the Rangers won’t have the balance of a good team.