Should the Rangers simply swap Goodrow and Kakko? 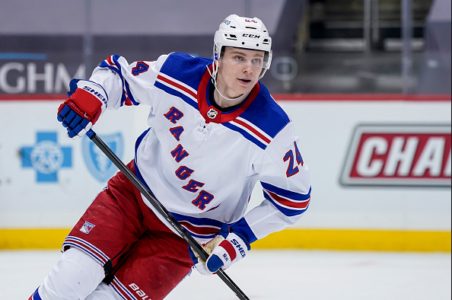 As the Rangers search for balance, one of the major questions is how to get the top of the lineup moving more consistently. Chris Kreider has been fantastic, but that’s about it so far. The rest of the top nine forwards either look bad, have been wildly inconsistent, or have had aspects of their game disappear to start the season. The pieces are there though, and perhaps it’s as simple as a Goodrow/Kakko swap.

While there are some that point to the Pavel Buchnevich trade as the sole reason for this inconsistency, we try to work through what the Rangers have to try to solve the problem. The problem isn’t Buchnevich is gone, though certainly a contributing factor. The problem is that this team is way too talented to look this bad offensively. Wholesale lineup changes aren’t needed. At least not yet.

Quite frankly, some of these problems can be solved by one simple lineup change. Let’s assume the below is true:

If the first five points are true, then there is only one solution. Barclay Goodrow should get a few games with Panarin and Strome, while Kaapo Kakko gets a few games with Kreider and Zibanejad. From a skill set and style standpoint, the simple swap should be a better complement to the duos the Rangers are trying to keep together.

This isn’t a guarantee that the swap will work. But given how awful the Rangers have looked offensively to start the season, it wouldn’t hurt to try. A Goodrow/Kakko swap doesn’t blow things up, and tries to work within what they have today.

The Rangers are in win-now mode, whether we like it or not. Sometimes it’s just a minor change that needs to happen. Let’s hope a Goodrow/Kakko swap is that minor change.