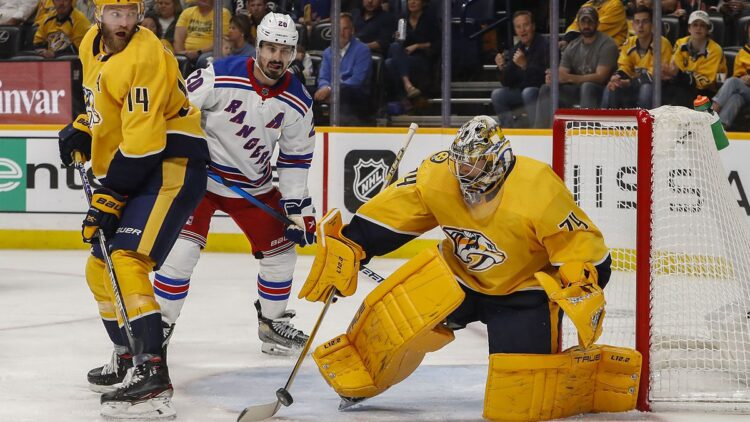 Another day, another solid road win for the Rangers. While there were moments it looked like the Rangers could fall apart, they reined it in, battled, and came away with two big points. While it is obviously not ideal to be down two top six forwards in Kakko and Strome, your best bet is to win as many games as you can and bank as many of these early points as possible. If the Rangers are truly a team with playoff aspirations, good teams find ways to win when a chunk of their talent is not available to them. Let’s jump into thoughts from this big Rangers win over the Predators.

In the interest of motivating Artemiy Panarin and trying to find other line combos, Gerard Gallant decided to bump up Panarin to the top line and make a second line of Lafrenière, Chytil, and Blais. The latter decision would prove to pay off in big dividends for the Rangers. Lafrenière would get another game-winning goal and notch an assist, Sammy Blais would come away with 2 primary assists, and Chytil opened the scoring in the first period.

It’s been said time and time again, but where would the Rangers be without Igor Shesterkin while they try and navigate through these injuries? It is awesome that guys are finding chemistry and continue to grind away at finding the right playing formula. It’s even better when you have an elite goaltender to help when you cause a turnover or need a big save from a high danger scoring chance. Even though the Rangers surrendered yet another First NHL GoalTM to another rookie, they didn’t quit after it. That’s the difference with this team than with teams from years past. They might not be the most balanced talent wise, but they are finding ways to win.

As corny, and as overblown this word is used in the context of sports, that’s culture. When you are rewarded with your work as an athlete with winning results, it breeds confidence and better overall play. The Rangers players are doing their job right now in banking the points while their two top six guys are out and it is to be commended. A game like this begs the question, when Strome returns, do you put him right back with Panarin, or do you keep a first overall pick on the third line with Chytil and Blais and see if they can cook against bottom six forwards/defense? It’s going to get interesting.