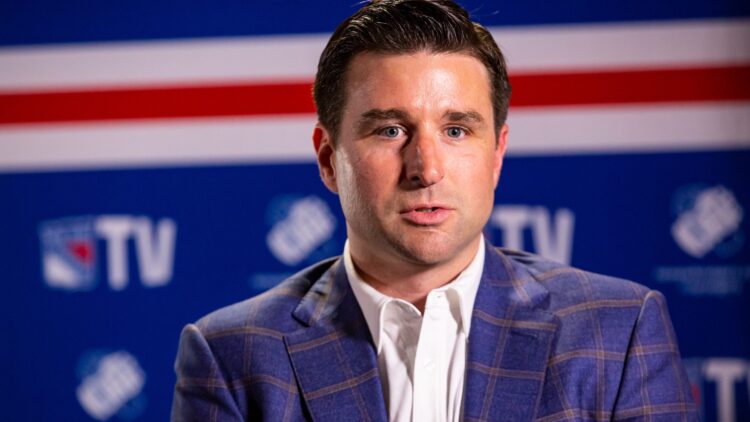 The New York Rangers are in a state of flux. Though the team is off to a relatively strong 2-1-1 start, there has been no shortage of off-ice drama dating back to last May. Arthur Staple, who will be part of The Athletic’s New York hockey coverage moving forward, burst onto the Rangers scene on Tuesday morning with a bombshell. His story (subscription required) detailed the complicated and often contentious relationship between Rangers President and General Manager Chris Drury and one of the team’s prized prospects, Vitali Kravtsov.

The fallout from the story was immediate, and ignited discussions among Rangers fans of all stripes with the Rangers’ top executive at the center. We here at Blue Seat Blogs decided to collate our thoughts on Drury’s body of work so far by answering the following question:

How would you rate Chris Drury’s performance as President and General Manager so far on a scale of 1-10, and why?

Dave: A solid 3 right now. He was a 5 before the Staple article. I understood the off-season moves, even if I didn’t necessarily agree with them. The team should be better and Gallant was a good hire. However he’s now had “miscommunications” with two top ten picks that led to them wanting out. One is a fluke, two is a trend. And now with the recent news of how Kravtsov was treated, it’s clear Drury mismanaged at the macro level too by not moving on before this became public. At the very least he should have had a backup plan at RW. There’s a lot going against him right now.

Rob L.: 4. Put simply, thus far Drury is just another example of an NHL GM that takes one step forward (Shesterkin extension, Nemeth/Hunt in UFA) followed by two steps back (Overall vision, the resulting Buchnevich trade, keeping Rooney over Blackwell, Goodrow signing years, Tinordi as 7 D-man). Overall, the team has had a core that will keep the Rangers from being a bottom 5 or even 10 team, but when you take away scoring depth and replace it with maybe-OK defensive players, you may not reach that top 5 or 10 team level either.

Where his grade will go truly depends on what he does with the cap space NYR has. A deal needs to be made sooner (as in by Thanksgiving at the latest) rather than later for scoring depth. I know that’s easier said than done, but with every passing game they risk missing on standings points in a highly competitive division. If they do nothing until January or February, it may be too late, seeing as the goal this season is to make the playoffs (and, I imagine, not get embarrassed in the first round).

Tyler: 5. During the offseason, I was hopeful with Drury. I could see him being just okay like most NHL GM’s. However, his overcompensation with adding a certain amount of grit to the team put so much pressure on young wingers Kakko and Lafrenière to come out on fire and be competitive immediately.  Despite my hope that Kakko and Lafrenière would each take a step at age 20 and soon to be 21 respectively, it is pretty clear that Drury did not come into this season with any sort of backup plan for his third line scoring issue.

As we’ve seen in the last week, with the Kakko injury, and Kravtsov suspended and in Russia, the Rangers lack serious depth on the wing. That’s an indictment on Drury. Even if it’s true and Kravtsov was more than likely in the Eichel proposal, Drury still lacked a true scoring threat after Kakko and Kreider on right wing. With so much cap space, Drury has a chance to make a good swing if the Rangers can weather the storm and be in the fight by the deadline. Forsberg, Tarasenko, Kessel. Any one of those three would look GREAT on a 3rd line with Chytil and Goodrow when the lineup is healthy.

Conall: 5. I’m very middle of the road on Drury. I think his good has been good and his bad… very bad. The overall plan of the team seemed not to be overly thought-out with the Buchnevich trade and the Kravtsov fallout. I maintain that they had a trade for Eichel lined up and have been scrambling since once it fell through. He’s banked cap space, which is certainly an asset, but until it’s weaponized that’s all it is. An unused asset.

Becky: 4. Prior to the Kravtsov drama, I’d give him a 6, because I don’t think his offseason choices are as terrible as advertised based on the on-ice product through 4 games. That said, he’s in over his head holding a dual role of President and General Manager. After all the Kravtsov news came out, it’s clear he’s got some management issues, to put it lightly. Whether he’s right or wrong by principle, it’s clear he isn’t managing assets properly and attracting talent, so he needs to get some help and immediately.

Russ: 5. It’s been quite the up and down start for Drury. To be fair, he’s had his good moments, namely the Shesterkin extension and hiring of Gerard Gallant. But a lot of his other choices are not without their downsides.

The Pavel Buchnevich trade was extremely controversial. Drury traded a top-six forward for a bottom-six grinder and a draft pick. This is not to say Sammy Blais isn’t a good player; he knows his role and he plays it well, but as of now, Drury got absolutely shelled in this trade.

There are two sides to the Mika Zibanejad extension as well. 8.5 million dollars is a lot to pay a center who is going to be in his late 30’s when his deal ends. Zibanejad isn’t the biggest play driver either but his finishing is absolutely elite. On the other end of this, an AAV of $8.5M was well below market value and he will most likely be elite for the next 3-4 years and still good in 5-6. I happen to like the deal but I understand why some don’t.

Finally, the Vitali Kravtsov situation. Simply put, this could have been avoided. I’m not gonna go into the Jack Eichel non-trade because it’s been discussed enough but I’m fairly certain Drury thought he had it done at one point and it fell through, which has completely compromised the Rangers’ forward depth.

Drury has some big decisions coming up including Adam Fox’s looming extension, and Kakko and Lafreniere’s extensions down the line. I’m just not sure how much I trust him at this point to lead the team long term. He’s got a lot of good will to make up with the fanbase.

Rob C.: 4. It seems to me that Drury is in over his head. I don’t disagree with the idea that the Rangers needed to be a more well-rounded team, and I think the bottom-six additions will make more of a positive impact than most are predicting. But Drury’s lack of management experience is evident. Asking a young GM to learn a dual role on the job, when the team is expected to turn the corner and compete for a Stanley Cup, is pretty unrealistic. This isn’t an excuse. Drury is doing many of the simple things wrong. That said, he’s been on the job for less than six months, and the Rangers have all of their draft picks, a ton of cap space and – even with the loss of Kravtsov – a deep prospect pipeline. Let’s see what happens as the season unfolds.