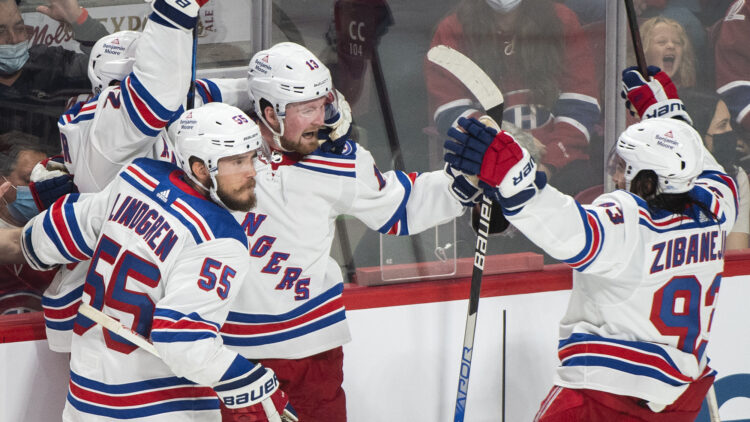 These games just keep getting cleaner, and cleaner, and cleaner. A solid road win despite being outshot 32-24. This is why you have Igor Shesterkin, to make the big saves. As an aside, it’s still hilarious that we went from the brilliance of Lundqvist to the also brilliant Shesterkin. As far as the entirety of the game, there were definitely some defensive reads and decisions that need to get further cleaned up. But let’s break down these thoughts on the Rangers win over the Canadiens more, shall we?

Saturday night hockey in Montreal is next level no matter what time of the year it is. Though, if I were an MSG producer, I would not have had Sam and Joe ramble for the pregame while the player introductions were occurring. That was rough. Most hockey fans find any teams home opening ceremony interesting so you at least know who you are playing against.  MSG should have just aired Montreal’s intros.

As for the actual game, after a feeling out type period in the first, the Rangers really seemed to gain some momentum and sustain offensive zone pressure. This, without the talents of Kaapo Kakko, who sustained an upper body injury in the first period. Which –if I may go on a tangent– is going to get real interesting if the Rangers suddenly are going to call on Vitali Kravtsov to get on a flight to Toronto for Monday night’s game.

While Kakko’s presence was sorely missed the remainder of the game, the Rangers weathered the storm and got some real good play from the top line and their fourth line. The trio of Blais-Rooney-Reaves might not end up on the score sheet, but even analytics models have shown they have been an extremely effective line at generating offense.

Speaking of offense, You know who has looked solid in 3 games? Chris Kreider. I know he gets flak from most fans for his contract, his streakiness, and his rather famous offsides moments. But I’d be lying if I didn’t say he’s been crucial for the last three games. All three of his goals this season have been in the front of the net. To me, there is no one currently better in the league at the net front than Chris Kreider. Is this finally the year he scores 30 goals? For our sake as fans, I hope so!

Lastly, there was no better story in this game than Alexis Lafrenière getting the game winning goal. First game at the Bell Centre, first game in Canada as an NHL player, and his first goal of the season. With his family present as well! That was just an incredible moment for him. Him and Mika Zibanejad have been waiting for a connection like on that goal to happen and it could not have happened at a better time. This could be a dynamic duo for the foreseeable future if they both continue the trajectory we think they both will have over the next couple years. Cannot wait to see this top line further down the line.