Rangers dominate Stars, but can’t get the second point 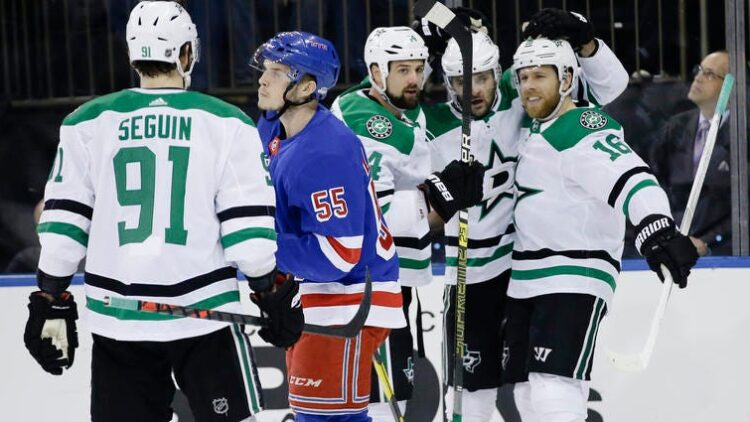 The Rangers continued strong play at even strength, dominating the Dallas Stars in most facets of the game. Despite that, they found themselves down 2-0 early courtesy of the obligatory first NHL goal and, of course, a powerplay goal against. The Blueshirts clawed back and managed to get a point, but couldn’t get the second one.

It’s hard not to be satisfied with the process in this game, even if the result was lacking. The Rangers really played well. It wasn’t perfect, and you can’t expect any NHL team to be perfect, but there was a lot more good than bad in this one. A clear problem does exist on the penalty kill, which is something to keep an eye on.

Another game, another first NHL goal fr a rookie. Nils Lundkvist hesitated big time in the neutral zone, and Jacob Peterson took advantage. Patrik Nemeth took the pass, which is the right play, but it looked like the communication with Igor Shesterkin was off. That will get better as they get used to each other.

Stars 2, Rangers 0 – Another PPG against

This one was a bit of bad luck for the Rangers, as the initial pass got deflected in the opposite direction that Shesterkin was moving. Radek Faksa was there to put it in the quasi-open net.

Adam Fox cuts the Stars' lead in half #NYR pic.twitter.com/vA48spffKA

Another goal, another deflection by Chris Kreider. This was a good cycle by Mika Zibanejad, and good recognition by K’Andre Miller to get the shot off quickly while Kreider had body position on John Klingberg.

The Rangers got a point, but it was an Artemiy Panarin turnover that led to a Jaime Benn outlet to Miro Heiskanen for a break. Jacob Trouba got back, but had to play the pass back from a bad angle, thus getting caught in a tough spot. 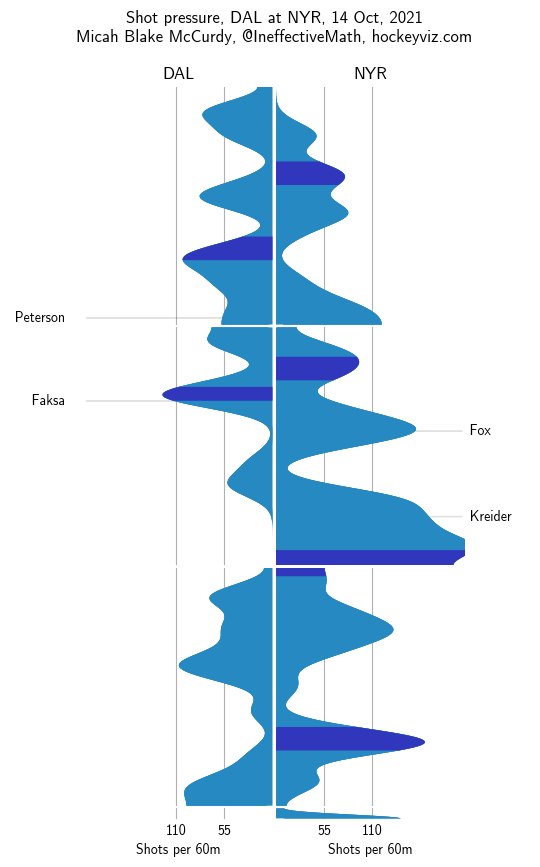 Instead of looking at the shot heatmaps and the individual skater results, which aren’t overly helpful on a game by game basis, let’s look at game flow instead. This shows much much pressure, thus shots and zone time, each team applied and shows momentum changes. Clearly the Rangers owned most of this game.

It isn’t the start most wanted, with just one point in the first two games, however this isn’t a cause for concern. Remember the 2013-2014 Rangers were losing games 9-2 and 6-0 to start that season before making a run to the Stanley Cup Final. There are new faces, new systems, and a new coach. This takes time. If the Rangers still can’t score by Thanksgiving, then we can have a panicked conversation.