It was only one game, but RW might be a problem for the Rangers 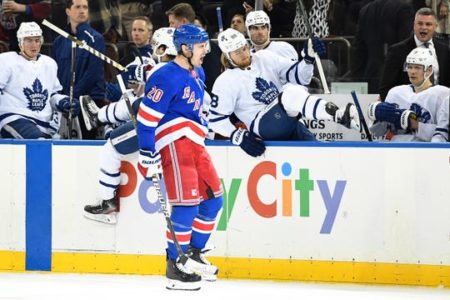 The Rangers shot themselves in the foot last night by taking a ton of penalties. They actually did a relatively good job at even strength as a team. Special teams will eventually work themselves out. Despite the decent opener at even strength, it was very clear the Rangers had a hole in the lineup. The vaunted RW depth is no more, with just Kaapo Kakko pulling his weight last night. If the Rangers are to be a consistent team, they will might need to address their RW problem.

One game stats are a mixed bag

Chris Kreider (46.67 CF%, 67.93 xGF%) had pretty good numbers for his first regular season game at RW, but he looked a bit lost at times. Perhaps this is just a bias, as the Rangers looked rough following that second powerplay goal against. They couldn’t get in a rhythm. However the quality of shots for/against was there, even if the quantity may not have been. Kaapo Kakko had the reverse effect, with good quantity but muted quality impacts.

Ryan Reaves aside, as he won’t (shouldn’t) be an everyday player, only Barclay Goodrow had positive impacts for both quality and quantity. While not every player needs to be a play driver, you do expect your top nine RWs to be able to tread water across the board.

Right now, it’s a mixed bag. Again this is fine for now, especially since it was just one game.

The major assumption the Rangers are making is that Chris Kreider can play his off-wing effectively. He’s an NHL player, so it shouldn’t be too much of an issue for him. One thing to watch for as the Rangers get rolling is how he accepts passes on his backhand, a critical piece of playing the off-wing. Kreider can put himself in a position to shoot, as we’ve seen, but accepting passes on the rush on his backhand is something new for him.

But what if Kreider falters? With no Vitali Kravtsov in the mix, the Rangers are very thin at RW. Julien Gauthier will likely be rotating with Reaves on the fourth line, but would he be able to play top-nine minutes if Kreider needs to move back to LW?

There is very little, if any, depth at the NHL level if something goes wrong. And over the course of 82 games, something will go wrong.

Brandon floated the idea of using the $8 million in cap space on Phil Kessel. He will be a defensive black hole, but he will drive offense and score. In the right role, he could be a good one year fill in.

Something else to consider is Lauri Pajuniemi, assuming he develops in Hartford. That is also a big assumption.

It’s only been one game, so perhaps all of this is just alarmist. But even on paper, the Rangers RW depth might become a problem sooner rather than later.