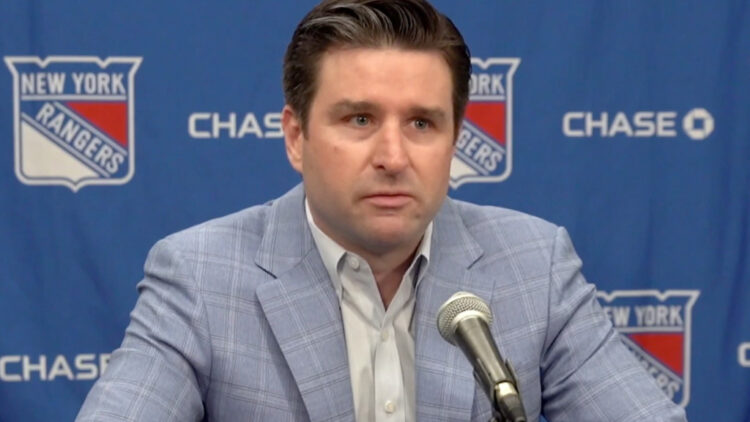 The Rangers are a mess right now. I don’t think there is any other way of putting it at the moment. Sure, the team on the ice is still likely to be better than last year, but the drama surrounding this team is just exhausting. Now, it is another top-ten pick that has requested a trade. The trade request by Vitali Kravtsov brings many questions, and no solid answers.

1. The Rangers turned a massive strength, RW depth, into a glaring weakness. What are they going to do if Chris Kreider at RW doesn’t pan out? Alexis Lafreniere already didn’t pan out there.

2. Why trade Pavel Buchnevich, just to cut Kravtsov without giving him a chance at 3RW?

3. What did Gerard Gallant see, or not see, in Kravtsov that warranted him being cut? Clearly something was said that warranted the trade request by Kravtsov.

4. What is going on in Kravtsov’s head that he couldn’t take a somewhat (hopefully?) quick demotion to the AHL?

5. How much of this is an attitude issue with Kravtsov?

6. Are the Rangers just clearing house of anyone that airs any concerns?

7. Why didn’t Kravtsov just report to Hartford? What was the harm in playing there a month?

8. You cannot convince me that the Rangers did not have a deal for Jack Eichel in place that involved Kravtsov now. This isn’t a question.

9. How can Chris Drury put all his eggs into the Eichel basket and not have a backup plan? It was Eichel or bust, and bust won.

10. What are these defined roles that Gerard Gallant speaks of? At this point, some clarity would be nice.

11. Is Gallant going for two grinding lines and two skill lines? If so, that is a very antiquated approach to the new NHL.

12. I have faith in Gallant, but #11 screams bad process. Again, not a question.

13. How is there no one in the locker room or in the organization that could speak to Kravtsov about his concerns?

14. Isn’t the point of all these leadership moves to be able to avoid a situation like this?

15. How much of Kravtsov’s preseason cut was due to his adjustment to North American ice?

16. If #15 is true, then why was Kaapo Kakko given leash and not him? Is it only because Kakko was a #2 pick and Kravtsov a #9 pick? Or again, was there an attitude issue?

17. If Drury and Gallant knew Kravtsov wouldn’t handle a demotion well, then why send him down? That is certainly a slippery slope, but if #15 is not true, then he was their most NHL ready prospect. Why not give him a shot?

18. What exactly is Chris Drury’s plan?

19. Equal blame for Kravtsov and the Rangers right now.

20. Despite #19, more questions are about Drury and the rough start to his tenure. Between this and the Buchnevich trade, these are potential Cup run derailment moves. Goodrow and Reaves are by products of the over arching issue of asset management right now. We got the letter, now we need some kind of follow up. Given the drama of the past six months, the fans deserve it. This is not a question.