Thoughts on the Mika Zibanejad contract 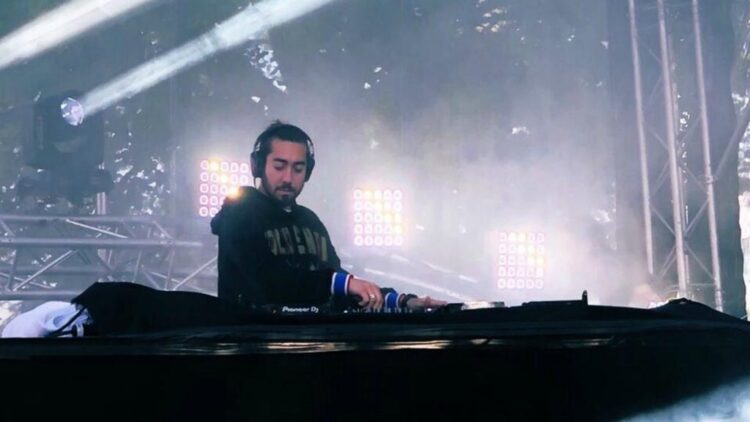 The big news yesterday was the Rangers and Mika Zibanejad agreeing to terms on an eight year contract extension with an $8.5 million cap hit. The deal locks Zibanejad in through his age-35 season. Per PuckPedia, the contract is front loaded, but heavy with signing bonuses.

As per usual, I have some thoughts.

1. First, on the contract term and cap hit. This is ideal for both parties. The cap hit of $8.5 million is very manageable for the Rangers, which is a big win. It doesn’t hamstring them at all, and if anything gives them some wiggle room for Adam Fox and Kaapo Kakko’s new deals this offseason. For Zibanejad, he left money on the table, but gets the full eight years, his NMC, and most of his money in signing bonuses. It is really a win win for both sides.

That said, the term seems to be the issue for some fans that complained about the contract. Eight years is likely 1-2 years longer than the Rangers wanted to go, and where most wanted the contract to be. However it is a trade-off. The cap hit is very manageable because of the term. So you cross that bridge when it comes.

2. Crossing that bridge when it comes has been the theme of the offseason, specifically with the Zibanejad extension and the Barclay Goodrow contract. Both contracts are about 1-2 years too long based on age. But that’s fine. The Rangers are securing what they believe they need to win now. This is the critical piece. The Rangers recognize that their window to win is while Artemiy Panarin is still Artemiy Panarin. They also will have an aging Chris Kreider to deal with at some point. By locking in the pieces they think they need to win multiple times in the next five years, they are signaling they are going for it. They had to transition at some point, and that point is now.

3. As for dealing with it when the time arises, there are always “what if” scenarios with every contract. You can’t live in a “what if” world and worry about everything. Yes, what if Zibanejad falls off a cliff at age 33? But you know what, that will be six years into the contract. At that point, Panarin is either on his last year, and possibly declining, or already off the Rangers. Ditto Jacob Trouba. Kicking the can down the road and dealing with it after this current window to win is a fine approach, even if it isn’t what you may have wanted or expected.

4. After the contract, the focus shifted to what Zibanejad is today on the ice, and what he might be in eight years. 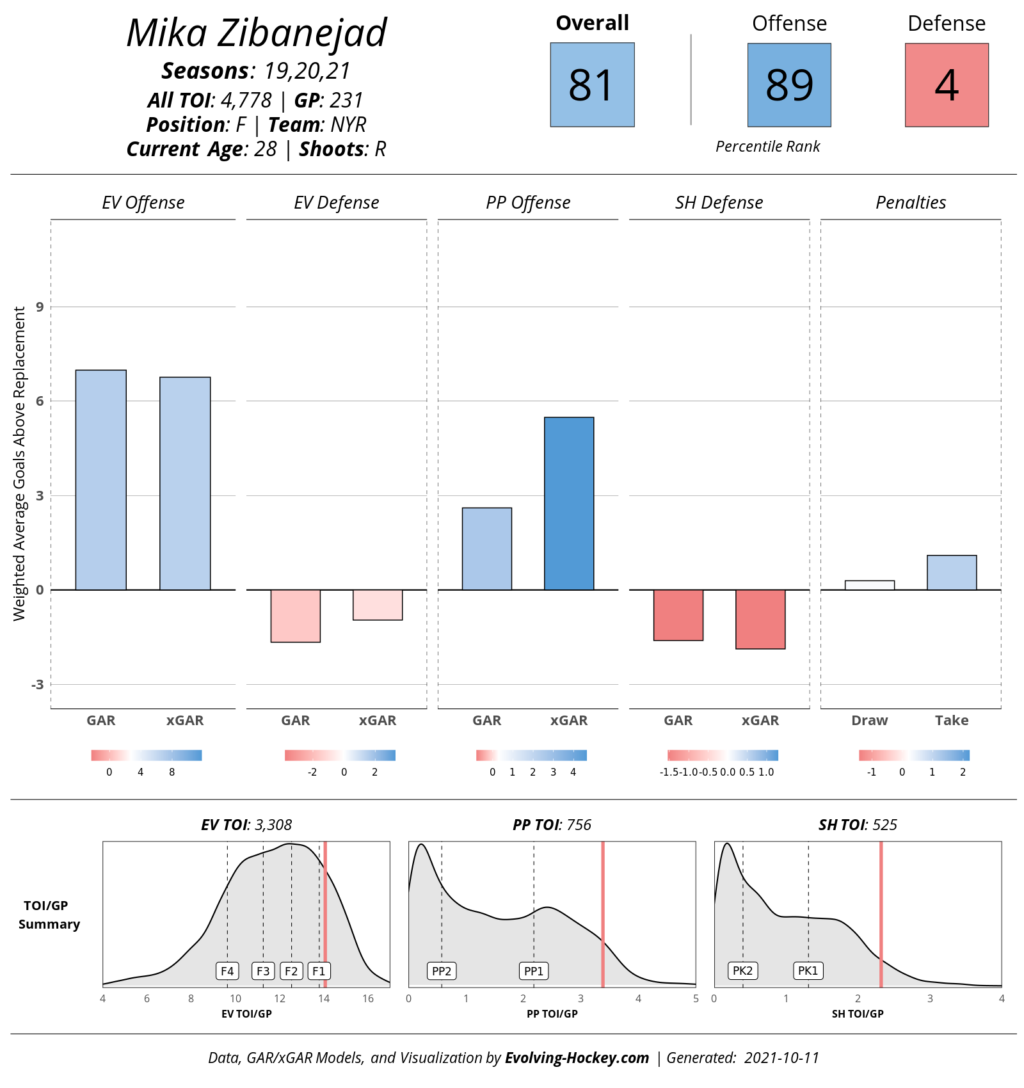 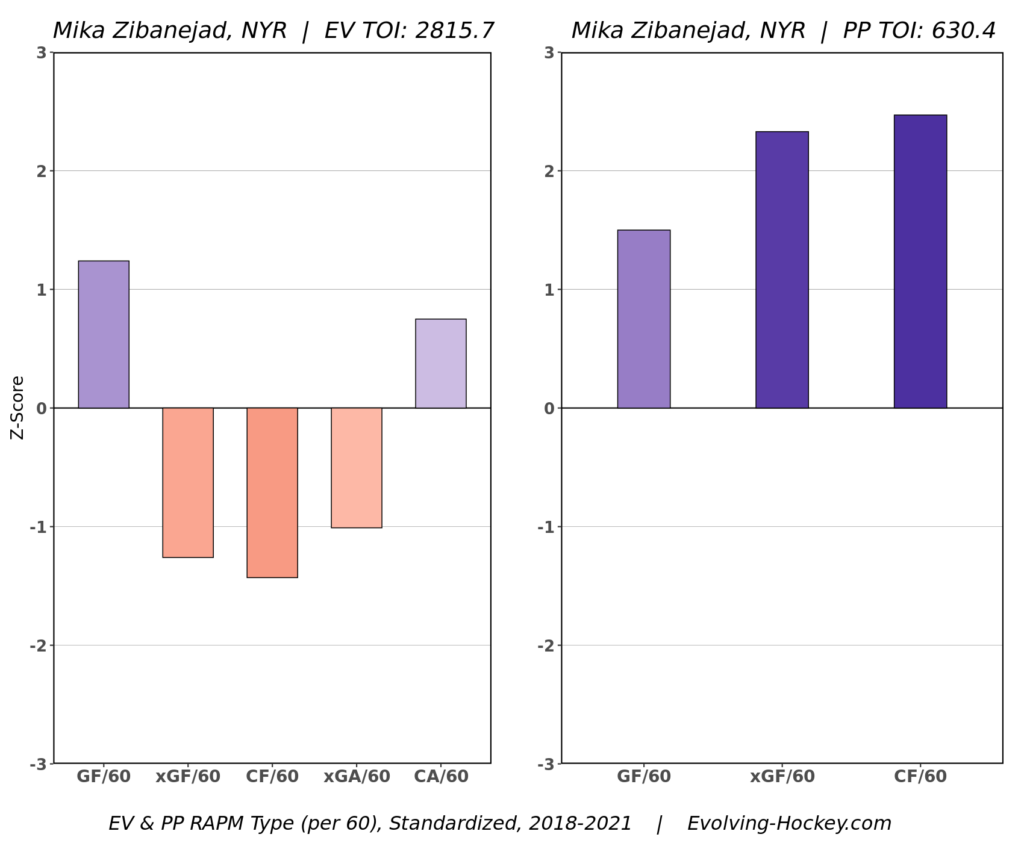 The three year charts show an all offense, minimal defense player who excels on the powerplay. This checks out, given Zibanejad’s lethal shot and effectiveness on the off-wing. The concern from a vocal set of fans is the lack of true possession driving numbers. This is a fine criticism of his play. The last three years, while kind to Zibanejad’s points, haven’t been kind to his perceived play away from the puck. It’s a valid criticism, backed up with stats.

5. But I offer you this: The last three seasons have been with David Quinn, and the Rangers weren’t exactly been a possession juggernaut in that time frame. The system was bad, and the team process was bad. They relied heavily on shooting percentage, and less on legitimate good process on the ice. That will change under Gerard Gallant. The process will be there, and assuming the skill doesn’t disappear overnight, the SH% should stay within prior ranges for some players. That includes Zibanejad, who is one of the best RH shots in the league.

6. Also worth noting that not every player needs to be a possession darling. This goes back to the roles conversation we’ve been having all summer. Zibanejad’s role isn’t to drive the play or to be spectacular on defense. It’s to put the puck in the net. But make no mistake, Zibanejad isn’t in Patrik Laine territory, where he is a one trick pony. There’s a reason why he’s on the penalty kill, at least to start the season. Zibanejad will be with possession drivers like Chris Kreider, Alexis Lafreniere, and others. All he needs to do is tread water, which he should improve to under Gallant.

7. The pessimism over basically everything is a bit humorous, including the Zibanejad contract. Gallant hasn’t even had one game under his belt and the sky is falling for the Rangers. Their plan is clear though. Think about job interviews. Sometimes they ask where you see yourself in one year, three years, or even five years. But 8-10 years? Rarely asked, because so much can change over that duration. Even over one year. Let’s remember this as the season starts. Who knows? Maybe the Rangers win a Cup or two in this span. Maybe they don’t.

There is one more clear thing though. The feeling around this potential run of Cup contenders has a different feel than the 2013-2015 run. The Rangers have elite young talent on ELCs in addition to elite veteran talent. We are watching the young core being complemented with the veterans, not the other way around.