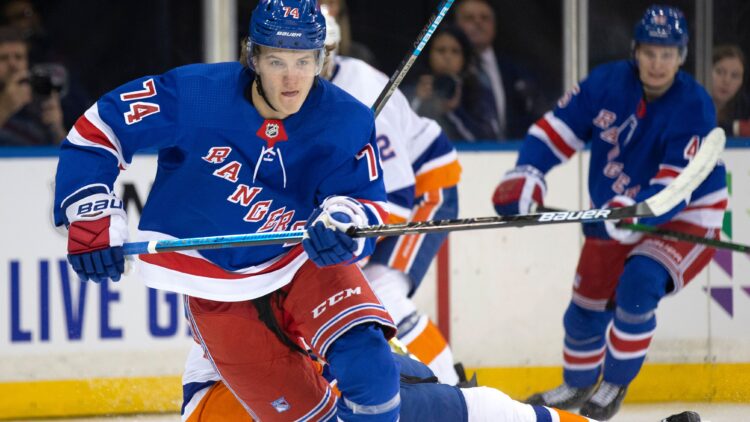 The Rangers released the 2021 training camp roster, and there were no surprises to be found. That means the Rangers are heading into camp with very few open roster spots. That doesn’t mean the roster is set, it means they have their players in mind for the roles, and will let them battle it out. The Rangers training camp battles are usually the focal point of the preseason, as is watching some of the kids to see how they look for the upcoming season. Given the expectation that the kids will have an impact, how they look and the battles to be won are one in the same this year.

1. While much of the focus will be on the bottom six roles, there are still some question marks in the top six. Specifically, how will the RW positions play out? The Rangers currently have two kids and a veteran in the running for those roles: Kaapo Kakko, Vitali Kravtsov, and Barclay Goodrow. Many expect Kakko to be in the top six, and I think that is a fair assumption to make. He did a complete 180 last season, and has shown he is, at the very least, a sound two way player. With proper deployment and usage, a problem under David Quinn, Kakko should put up the 50-60 points expected from a top-six player. But as for Kravtsov and Goodrow, expect them both to rotate into the second line, with the other on the third line. A third line with either of those two will still be a forechecking machine, so don’t think it’s necessarily a demotion for one or the other to be on the third line. As we’ve seen, it’s about roles.

Food for thought: Goodrow is listed as a LW on CapFriendly.

2. Something to consider: What if one of the LWs (Chris Kreider, Artemiy Panarin, Alexis Lafreniere) move to their off-wing? That would certainly shake things up a bit. My guess would be Lafreniere would be shifted in this scenario, as unlikely as it may seem. If this does happen, then we may see Goodrow as the 3LW on a line with Filip Chytil and Kravtsov. Chytil and Kravsov are tremendously skilled, and that line could have a great balance of forechecking, skill, and getting to the net. There’s also solid defensively play from both Goodrow and Chytil –Kravtsov TBD– that makes this line a potential problem for the opposition. This situation, while again unlikely, gives the Rangers options. The one theme to take away is that when it comes to top-nine options, the Rangers have plenty.

3. Let’s also keep an eye on the Chytil/Ryan Strome battle for the 2C role. It may seem like Strome’s to lose, given the chemistry he has with Panarin, but Chytil is ready for a long look in that role. The stats suggest that he will see a big uptick in production –given his even strength P/60 rate– if given more ice time. We also know that Strome, as great as he has been, isn’t really in the Rangers’ long term plans. They’ve tried to trade him a few times already, and it wouldn’t be a surprise to see him as a salary offset in a bigger trade (Eichel?). That said, he’s still with the team and a solid contributor. Do the Rangers look to give Chytil the role, given the focus on getting youth more time? Or do they go with ole reliable Strome-Panarin, something that worked amazingly well? There’s no wrong answer there. But know this: Part of this decision is predicated on who gels with the potential third line wingers as well.

Perhaps the best way to look at the Rangers isn’t a top line, second line, and third line. It’s three solid lines that can put the puck in the net, play two-way hockey, and be aggressive on the forecheck and in the neutral zone. It wouldn’t shock me to see an even split of TOI at even strength for the top nine.

4. That brings us to the fourth line, where the Rangers appear to have a few training camp battles. Morgan Barron vs. Kevin Rooney is a big one for the 4C role. Even if Barron wins it, don’t think of protecting Rooney as a wasted expansion draft space. A reliable 5C who can step in when injuries happen is a valuable resource, especially when Colin Blackwell was so easily replaced by, presumably, Dryden Hunt. Hunt, as of now, is the only LW that is pegged for the fourth line. The others: Ryan Reaves, Julien Gauthier, Sammy Blais, are all listed as RWs. That doesn’t necessarily mean much, or perhaps it means Chris Drury and Gerard Gallant have Hunt penciled into the 4LW role. That means a huge battle for the final roster spot between Reaves, Blais, and Gauthier. All three have different skill sets to bring to the Rangers. Is this truly a battle? Or do the Rangers expect to use them in varying roles.

One thing that looks obvious to me: Gauthier is on the outside looking in, and needs a strong camp. Reaves and Blais are on the NHL roster. Gauthier needs to outplay Hunt, and he has an uphill battle.

5. As for defense, most of these spots are set. The only true battle at Rangers training camp right now is Zac Jones vs. Nils Lundkvist for the 3RD spot. Lundkvist has the inside track here, even though Jones played a bunch of games at the NHL level last year. Jones will benefit from a full season playing at all strengths in the AHL. Lundkvist is considered more NHL ready, but that could change in camp. A strong performance by Jones, outplaying Lundkvist, could mean Jones gets the spot. Whomever wins that spot, it isn’t a knock on the other. It’s a true battle for who will get that last spot between two solid prospects. Expect to see both on the Rangers this season.

6. I also think there is a “battle” for the 7D spot between Jarred Tinordi and Libor Hajek. This looks to be Tinordi’s to lose, mostly because Hajek has been objectively terrible for two seasons now. But don’t discount Anthony Bitetto, although giving Tinordi two years seems to hint at Tinordi as the 7D. From a pure waivers standpoint, it doesn’t really matter who gets the spot and who gets sent to Hartford. All three will go through unclaimed. None are worthy of a claim, because they’d have to be kept at the NHL level.

Something to keep in mind is how Braden Schneider looks in camp. While Tinordi may have the inside shot at the 7D role, don’t expect him to play regularly. Expect Jones to be recalled if there is a long term injury. But also expect Schneider to see some action if the injuries mount. He’s been deemed untouchable, at least currently, by the Rangers. They view him highly.

7. One of the lesser spoken about battles at Rangers training camp is that of special teams. We expect Gerard Gallant to break apart that PP1 unit, if only to add another one timer option opposite Panarin/Zibanejad. We have the expected option in Lafreniere, but he still needs to earn that role. There are also a bunch of question marks around PP2, which was wholly unproductive last season. Part of that is coaching/opportunity, and part of that is just development. Which kids get those spots? Will we see Kakko and/or Kravtsov there? What about Lundkvist or K’Andre Miller? These battles will have a direct impact on which kids put up more points. Powerplay time is key in point production. I do expect to see all four on PP2, but how many will be permanent fixtures?