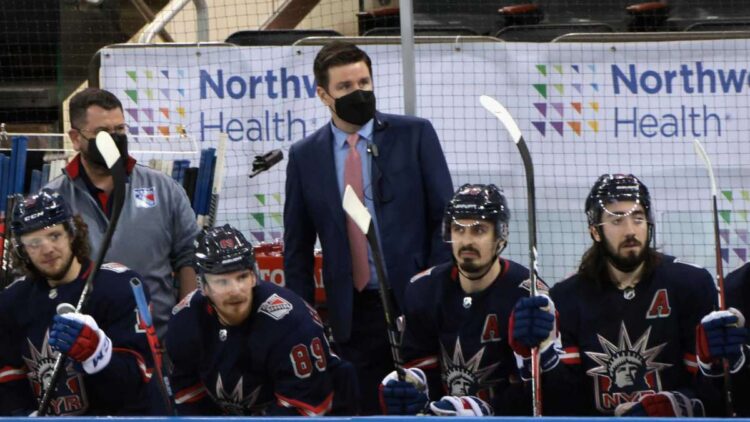 As the Rangers prepare for the 2021-2022 season, there seems to be two camps of Ranger fans. There’s a camp that is expecting playoffs, seeing the big picture for the team. The other camp is very pessimistic, and seems to think there is no hope for the team this year. From what I’ve seen, there seems to be no middle ground, which is in line with how the fan base has been the last few years. But in Chris Drury’s presser yesterday, his comments gave cause for optimism, perhaps that many are missing the forest for the trees in this upcoming Rangers season.

The biggest piece that I saw was how Drury spoke about Vitali Kravtsov. Kravtsov was not on the Development Camp roster, which caught some attention. The Rangers don’t consider him a developing prospect anymore, and he is considered an NHL ready player.

"We were excited with big parts of his game last year." #NYR

To me, this means the Rangers not only expect him to make the opening night lineup, but have a significant role in the top nine. His three zone game was very impressive in a small sample size last year. Specifically his neutral zone play caught my eye, as he was far more aggressive than the other Rangers. That may be a product of the system they played, but it bodes well for a more aggressive team this season. If the Rangers are more aggressive, then optimism for Kravtsov hitting his stride should be there too.

One of the moves that draws the ire of many is trading for, and then extending, Ryan Reaves. I understand the sentiment. Reaves is 34 and hasn’t been productive for a few years. His last productive season was when Gerard Gallant was coaching in Vegas. Reaves wasn’t a reactionary move to Tom Wilson, despite the easy narrative. He was a player that the Rangers have been targeting for a while.

Reaves may not be productive anymore, and his $1.75 million salary may eventually be a “waste of cap space” as some have eloquently put it. But given what the Rangers are trying to achieve, and the cap space they have this year and next, it’s a low risk move. At worst, Reaves is an expensive 13/14F. At best, he regains his form under Gallant and has a couple of productive seasons.

A topic that generally draws sarcastic comments is the naming of a captain. Nothing screams “I don’t know the plan” like downplaying the captain discussion. The Rangers haven’t had a captain since Ryan McDonagh, and while naming the right captain is important, it was symbolic of the relative disfunction of the team on the ice in the David Quinn era.

There will be a captain this season. While it may not impact play on the ice, it impacts the human factor, which is often overlooked. Addressing the human factor and the chemistry on the team has been an offseason goal, and this is a step in that direction. This may not bring as much optimism to the Rangers this year as others, but it is still a necessary step.

Two other tidbits stood out to me. The first is, as expected, Nils Lundkvist appears to be penciled into the 3RD spot. It’s not a direct quote, but it’s implied. It’s expected, but still refreshing to hear, as his name had popped up in rumors. I theorized that the old regime would have kept Braden Schneider over Lundkvist if push came to shove. The new regime, maybe not. However it does appear a decision is looming here.

Filip Chytil and Morgan Barron are both viewed as centers, which is a critical piece in both trade value and development. A center’s job is far more than just faceoffs. He’s methodical, strong in all three zones, and isn’t always your fastest skater.

Put your fast guys on the wings and your slower guys at C.

The thread above from Jack is a good read from someone who worked at the NHL level. Both Chytil and Barron, while not the fastest skaters, are very smart and skilled players who would make fine NHL centers. Whether they stay there, either with the Rangers or elsewhere, is more about team needs than their own abilities.

Summing this up, the Rangers have an overall goal in mind. Aside from the tactical pieces, there’s a goal to create a more cohesive unit and team. Over the next 3-4 seasons, before Artemi Panarin, Chris Kreider, Mika Zibanejad, Barclay Goodrow, and Jacob Trouba become question marks in their thirties, and before cap concerns become a reality, the Rangers are going for it.

With Reaves being inconsequential, the focus from the pessimistic side has been on the Pavel Buchnevich and the Goodrow contract. The Buchnevich trade was downright bad, but the production can be made up in the aggregate by the kids. If there was a better return, we likely wouldn’t be this upset with the trade. There’s no sugar coating it, it’s a bad trade.

As for Goodrow, years 4-6 will likely be rough. But he bring a lot of balance to the lineup that gets the Rangers closer to their goal of a more balanced team with specific roles. For now, in the next 3-4 years, the Rangers are going to be a solid team on the rise, and one that can make a run. There are many reasons for optimism for the upcoming Rangers season, and you don’t need to squint to find them.