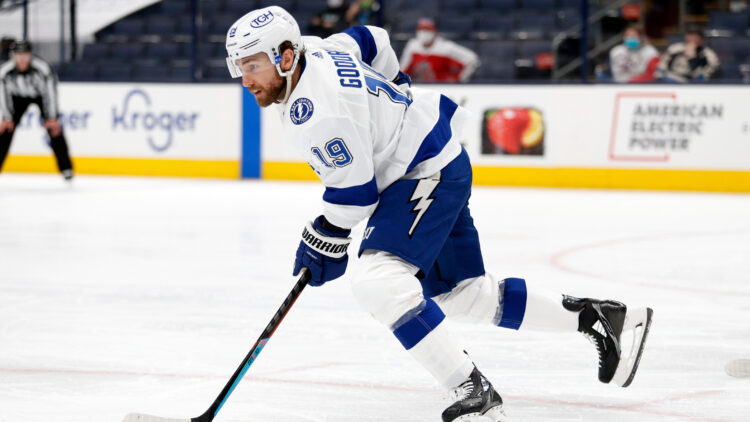 With the Jack Eichel trade situation more or less on hold, the Rangers appear to be entering the season with the current lineup. It is most likely a playoff lineup, but it highly dependent on Alexis Lafreniere and Kaapo Kakko taking their appropriate next steps. It is also dependent on Gerard Gallant meeting expectations with a more aggressive style of play that has full team buy in. Part of that is everyone knowing what their job is on the ice, specifically what the Rangers forward roles will be.

1. Rangers forward roles have been a big focus for the team this offseason. It is, for the most part, why they signed Barclay Goodrow to that very long deal. The general consensus last season was that the forwards didn’t know what they were going to do when the got on the ice. This held especially true for the fourth line, which was usually a punishment or scrubs line, and nothing that was there to drive play. If there is one thing Gallant will bring, it is that the fourth line will be a useful line that is no longer a net-negative on the ice.

2. But before we can define what the fourth line will be, we have to define what the top nine will be. Suit wrote about this last month, and I don’t believe that Gallant will have one dedicated shutdown line. Instead, there will be a nice balance of scoring and defense/forechecking in the middle/bottom six. Guys like Goodrow, Sammy Blais, and perhaps Morgan Barron or Dryden Hunt fill that role and can be sprinkled throughout the lineup. I’d expect at least two of this quartet to be in the lineup nightly. If we assume Goodrow is going to be the 3RW, then pairing him with Chris Kreider and Filip Chytil gives the Rangers a dangerous two-way line that can wear down the opposition.

3. This likely means the top-six will be primarily scoring. This also checks out, as it will put Laf and Kakko in more offensive positions on a consistent basis. The safe assumption is that the top six will consist of that duo, plus Mika Zibanejad, Ryan Strome, Vitali Kravtsov, and Artemi Panarin. We can debate all day for what the line combos will be, but as long as Laf, Kakko, and Kravtsov all produce as top-six players, they will be fine. The matchup key here is ensuring they are put in positions to succeed.

4. Returning back to the fourth line, this is a line that will change based on opponent. Blais, Barron, Hunt, Kevin Rooney, Ryan Reaves, and Julien Gauthier will all likely see some significant time here. But let it be known that this is not David Quinn’s or Alain Vigneault’s fourth line. This is a fourth line that will have a defined purpose. That collection of players can score, forecheck, play two way hockey, and throw a body. It will be a matter of finding the right guys for the right matchups. If Gallant’s reputation as a player’s coach follows him to New York, then we should see him getting the most out of each of these guys in a part time role.

5. While the focus is on Rangers forward roles, don’t discount how the defense has improved. The safe assumption is that the top-four will remain intact, while Patrik Nemeth will be stapled to Nils Lundkvist’s hip on the third pair. Last season’s third pair was nothing short of a disaster. By simply stabilizing that pair, the Rangers will have a far better defensive performance than last season. It’ll help to have some consistent backchecking and pressure at the blue line too. It’s unclear how, or if, Gallant will have these pairings matched up. Perhaps we see specific roles for pairs going forward.

6. Aside from the Nemeth-Lundkvist pairing, the other “given” assumption with roles is that Adam Fox will get all the top pairing minutes and matchups. This likely means he and Ryan Lindgren remain as the top pair, as both have shown the ability to thrive in that role. However if Gallant decides that the pairs won’t have predefined roles, and that is a strong possibility, then we may see him shake things up to get the most out of each player. Perhaps K’Andre Miller benefits from playing with a Norris winner to help round out his game. That would leave Lindgren and Jacob Trouba, which plays more to Trouba’s strengths to get the most out of him. I would expect there to be some rotation early on before Gallant has a feel for the blue line.

7. Spoken about less than the defense pairs is special teams. Having two balanced and dangerous powerplay units is going to be critical for the Rangers. For starters, let’s hope that Gallant has more handedness balance on each unit, as the four righties on the top unit didn’t do much for creativity and predictability. That unit was a one trick pony, and it left the second unit in the same situation with less talented players. The first item on Gallant’s agenda is to get a second one timer option on each unit. There’s more than enough skill for both units to be dangerous. Now it’s about finding the right chemistry.