The 2021 NHL Draft order is set, for now. Barring any trades, the NY Rangers will be selecting #15 overall. While the 2021 Draft is deemed “weaker” than the 2020 and 2022 drafts, it is still a draft with solid players available. The Rangers actually have a good situation, where they aren’t picking in the top-ten in this draft. There will be many options at #15, and the scouting report on Mason McTavish is another goal scoring forward who plays a good two-way game.

Much like Cole Sillinger, McTavish is a pure goal scorer with great touch and a tremendous shot. He has quick hands, which allows him to change the angle on a shot quickly. Couple that to his quick release with power, and he’s able to rack up the goals quickly. But just because he has a good shot doesn’t mean he’s unable to see the ice properly. He has solid vision and is able to read plays and set up his teammates well.

While his top-end speed isn’t great, McTavish does have good agility on his skates. He’s not as shifty as Sillinger, but he’s still got some quick moves. He also has great lower body strength. He excels with puck control, cycling, and shrugging off checks.

Defensively, McTavish is solid with his positioning and is aggressive on the back check. He uses his size well low, protecting the home plate area.

Like most prospects in the 2021 NHL Draft, McTavish will take some time to develop. He’s no speedster, and while he makes up for it in other areas, he will need to get faster.

McTavish is likely the most well rounded forward in the draft, as there are no glaring weaknesses. That said, no glaring weaknesses could be a misnomer, as he will need to continually improve and develop. He is also one of those high floor/middle ceiling kind of guys. He doesn’t necessarily project out as a game breaking center, more like a middle-six center. 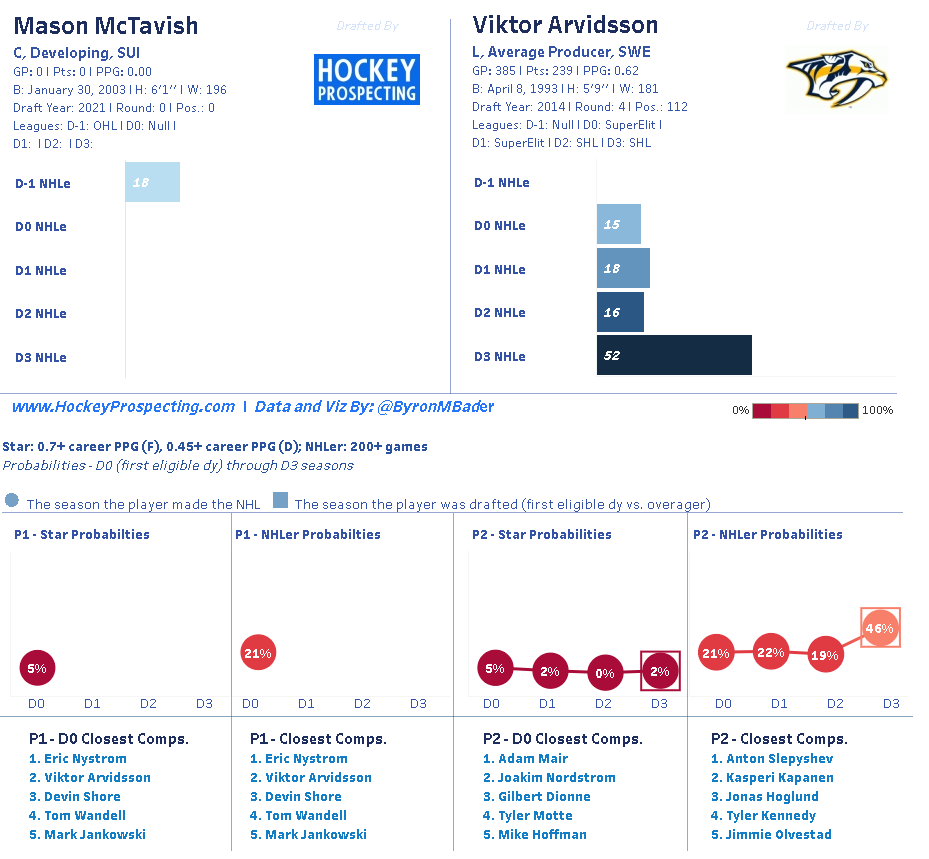 COVID impacts beware, as McTavish did not have a season this year to compare to last year. This does truly hurt his projections, and it’s tough to gauge where he sits. What I do find interesting are his NHL comparables, which are basically middle-six/bottom-six players. That’s fine, but given how high some people are on him, it might also be buyer on McTavish.

Update: To be clear, 13 games in Switzerland is not statistically significant enough to impact the above.

He’s big and has a good shot, but there’s a reason why his rankings are all over the board. The scouting report on Mason McTavish is that he’s talented, but is there enough high end talent to warrant a top-15 pick? Possibly, but also maybe not. That’s the way the draft always is.

Given that McTavish didn’t have a season this year, it’s very hard to see how he progressed. The all around tools are there. But is the ceiling worth it for a potential top-15 pick? There are many prospects in the same boat, so he might be worth the risk if there at #15 for the Rangers.