The 2021 NHL Draft order is set, for now. Barring any trades, the NY Rangers will be selecting #15 overall. While the 2021 Draft is deemed “weaker” than the 2020 and 2022 drafts, it is still a draft with solid players available. The Rangers actually have a good situation, where they aren’t picking in the top-ten in this draft. There will be many options at #15, and Cole Sillinger is a guy who, based on scouting reports, could be a good target.

Cole Sillinger might be the best pure goal scorer in the draft. His wrist shot is hard and accurate, and he’s very good at quick shifts to change the angle of his shot. Quick hands are the name of the game with such a skill set, and Sillinger’s are no different. His quick release, coupled with the shifts to change the angle, make him dangerous every time he has the puck in the offensive zone.

When you watch all of his goals, you see these skills at work. Something else to notice is how he is often in the right place at the right time, but also ready to receive a pass or tee up a shot. Putting himself in a position to shoot is another aspect of his game that, while often overlooked, is critical to his goal scoring ability.

Sillinger isn’t the best skater in the world, but he’s improving year over year. He’s never going to achieve Chris Kreider speed, which is to be expected for most. The important factor is that skating won’t be a detriment to his game. It won’t be a highlight either. He will be able to hold his own, and as long as he is putting himself in positions to score and is tough to knock off the puck (he’s 6’0, 187 lbs), he will be fine.

You can teach skating and shooting, but you can’t teach intelligence. Sillinger sees the ice well and is good at reading the play to both help his own chances and set up his teammates. While he is certainly a sniper, it’s not his only offensive tool. He’s dangerous both with the shot and with the pass, making him a very gifted offensive player.

A theme of the 2021 NHL Draft is that all prospects will have areas for improvement. There is no “complete” prospect this year, just high ceilings with development time needed. Sillinger’s development time will be for his skating, as mentioned above, and his defensive reads. Like most kids, he struggles in his own end. This isn’t necessarily a cause for concern, it’s just an area to develop.

One of the bad habits is puck watching, thus taking him out of position. Again this is relatively normal for a teenager. It is also something that may prevent him from being a center at the NHL level. Centers in juniors converting to winger at the pro level is common. 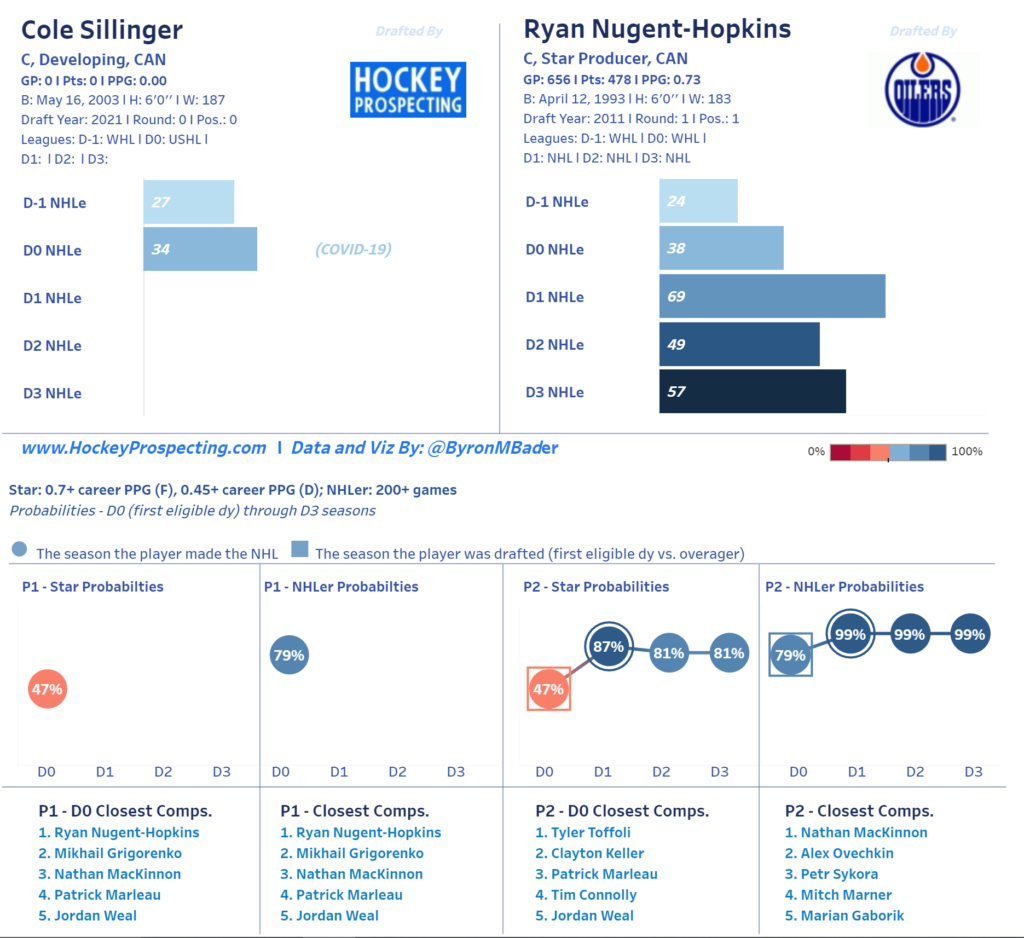 This is a new feature that I signed up for, and if you’re looking for a good way to dive deeper into prospect analytics, Byron Bader’s Hockey Prospecting tool is the best one to go with.

Another interesting aspect here is that Sillinger’s strengths –pure offense and great hockey IQ– and areas for improvement –skating, defense– are RNH’s strengths and weaknesses at the NHL level. Goes to show you that what we see on the ice does show up in the stats.

The big year for Sillinger will be next season when the WHL has an actual full season. He will need to continue to work on his weaknesses, which may actually impact some of his scoring lines. Growing a more well rounded game will get him to the NHL.

The Rangers could do much worse than, per the scouting report, a pure sniper in Cole Sillinger. I think he’s the clear choice for the Rangers if he is there at #15.