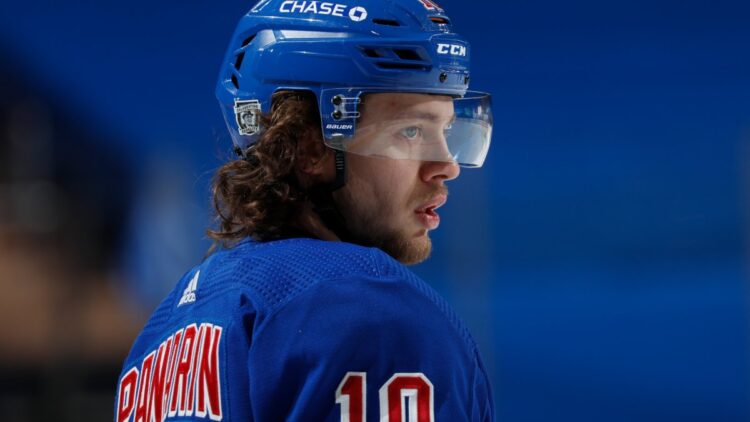 Grading Artemiy Panarin might be the easiest report card I’ve ever written on this site. I don’t think there’s any question or debate that Panarin is the best Rangers forward by a country mile. So, with the exception of maybe a few stone throwers, I think for today’s post we can also widen the aperture and talk about Panarin’s legacy on Broadway, what his future role is with the team, in addition to the usual report card metrics.

First, let’s start with the obvious. Panarin in my mind is the best Rangers forward since Jaromir Jagr donned the Broadway blue. This season he put up 17 goals and 58 points in just 42 games. For those of you who aren’t a suit or suck at math, that’s 1.38 points per game. This ties last year’s output and is again a career high for the Breadman.

Sure, Marian Gaborik and Rick Nash each had 40 goal seasons at MSG. However, neither could stay healthy for consecutive seasons and both players’ efforts often waned at times. What separates Breadman from those two is his commitment to the back check. He may not be out there throwing hits like Kreider, but he still hunts down pucks and causes turnovers. That matters just as much as his ability to go bar down.

John Tortorella had a great take on Panarin recently. He told a reporter that Breadman was his favorite “tired player” to coach, because he always gave max effort. That’s some pretty high praise from a guy who has coached some of the league’s best players over the last 20 years.

Onto the nerdy stuff… 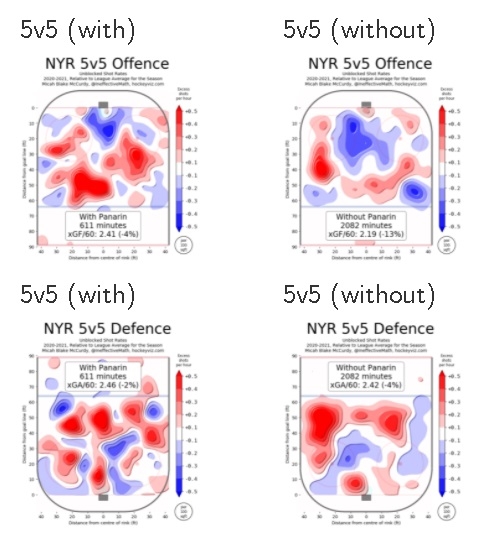 Artemi Panarin brings the heat on offense. The Rangers expected goals (which measures shot quality) is 2.41 with him on the ice and 2.19 when he’s on the bench. Defensively, the Rangers are essentially breakeven when he’s out there. Obviously, that’s what you want to see from a top tier forward. 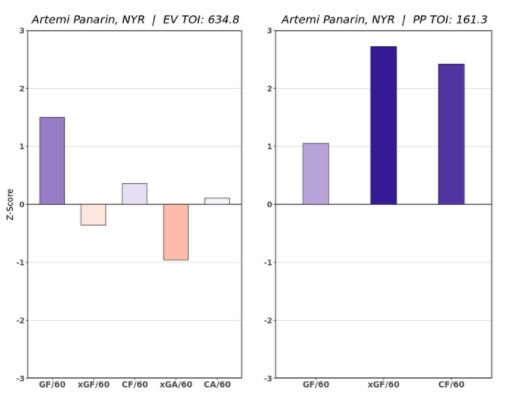 Artemiy Panarin’s RAPM charts, which Dave uses regularly in these posts, also shows how much Breadman brings to the table on the PP. He’s a bit negative here on defense, which doesn’t make a whole lot of sense to me given that his Corsi, expected goals, and scoring chances are all around 50%. I’m not an expert on what actually goes into these models and how all the variables are weighted. So, make of this what you will.

Artemiy Panarin easily gets an A+ this season and in my opinion should be wearing an A every night on his jersey for the duration of his stay here. His production was up there with his career best despite having a subpar roster around him, pro-Putin cronies after him, not to mention all the other challenges this season had.

I was not a big David Quinn fan, but you have to give him credit for putting Panarin in a position to succeed. I’ll be very curious to see how a new coaching staff will utilize him. Will it be more of the same? Will they try to get him out on the PK for some shorties? Who will he play with and in what formation? It will certainly be a situation worth monitoring.