When the Rangers signed Jack Johnson, it was ridiculed more or less across the board. Most knew that he was a pretty big negative on the ice, and few were in disagreement there. The hope was that Johnson would provide some off-ice leadership in the locker room for a young team. He was also supposed to serve as the 7D, maybe getting in about half the games this season.

Much like with Libor Hajek, we know how that played out. The Rangers had drama and injuries, and Johnson wound up playing regularly through January until his lower body injury in February. Given Johnson had sports hernia surgery in March, which came after he played seven games in a row in late February/March, it’s safe to assume Johnson played through the injury. The Rangers were decimated by injuries and Johnson went above the call of duty by playing through the injury.

Better than Hajek, at least

In 13 games, Johnson was held scoreless until his final game of the season, where he scored a goal. But he wasn’t here for scoring. He was just a stopgap. 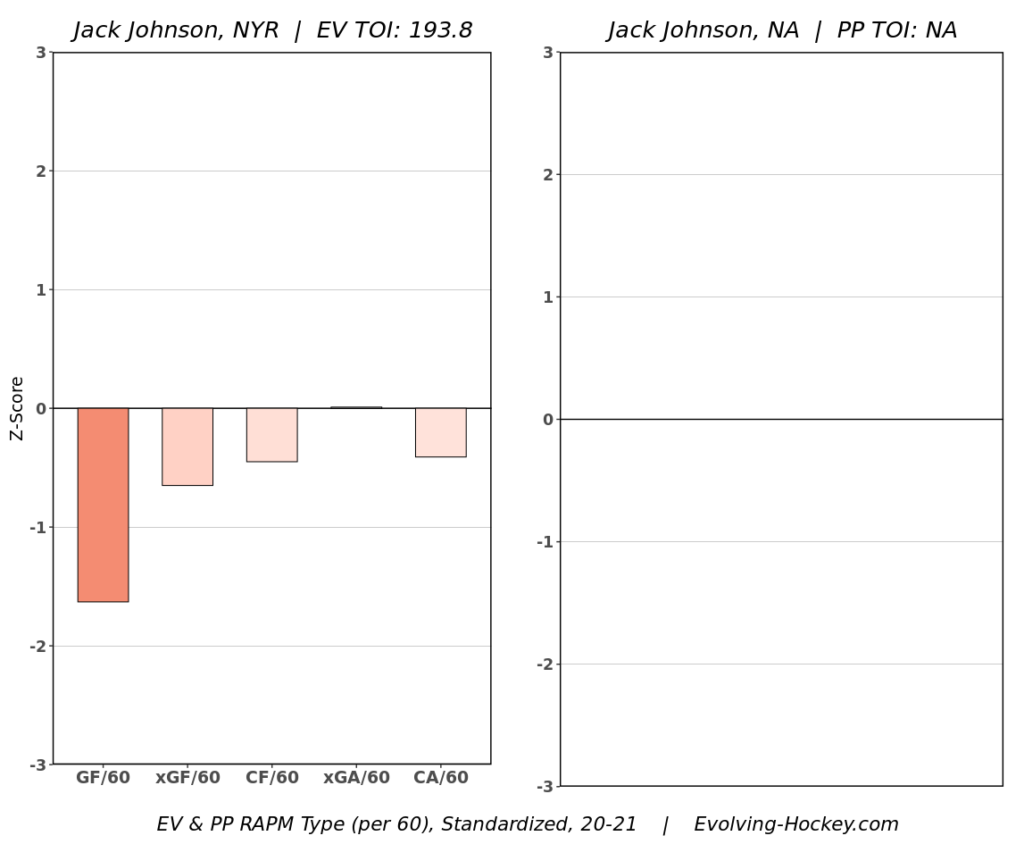 Small sample size warning, but Johnson at least held his own in limited minutes defensively. He may have also benefited from playing during a time before the Rangers fell apart defensively. But let it be known that Johnson wasn’t a huge net negative on the ice. He wasn’t great, and he was below replacement level, but he could have been far, far worse.

To be honest, this exceeds expectations for Jack Johnson with the Rangers. I think most feared the worst, thinking he would be one of the worst defensemen in the league. He was far from it. Again small sample size warning, and it’s hard to call Johnson a success in New York, but it could have been much worse.

Credit where credit is due for Johnson. He bridged a gap, played through a sports hernia, and was far better on the ice than most expected. All in all, and I can’t believe these words are coming out of my mouth, he was worth the one year deal.