The Rangers should pass on Seth Jones

The big news this week from the NHL is that Seth Jones will not be re-signing in Columbus when his contract expires after the 2021-2022 season. He will test free agency, meaning the Blue Jackets might look to shop him now to salvage value. It’s expected he will be dealt this offseason. But Seth Jones is a name the NY Rangers should avoid at all costs.

There is no fit

As much as we all love the next big name out there, the Rangers don’t have a need on defense. Especially not on right defense. The Rangers have Jacob Trouba and Adam Fox solidified in their roles for the (likely) long term. They have a choice between Nils Lundkvist and Braden Schneider, both of whom are expected to be legit NHL players. There’s also Hunter Skinner, but he’s a few levels down from Lundkvist and Schneider.

While Jones’ contract is easily manageable at $5.4 million for next year, the timing isn’t right either. The Rangers aren’t set to be a true Cup contender next year. It should be their first playoff appearance since the rebuild. But that doesn’t mean Jones is going to be a guy that puts them over the edge.

There’s also the trade cost and his next contract to consider. The Blue Jackets (note: JD) will need to nail that trade, even if Jones is a rental. That’s going to be at least a draft pick or two and a piece you don’t want to part with. Then there’s his next deal, which could be in the Trouba range.

He’s really not that good 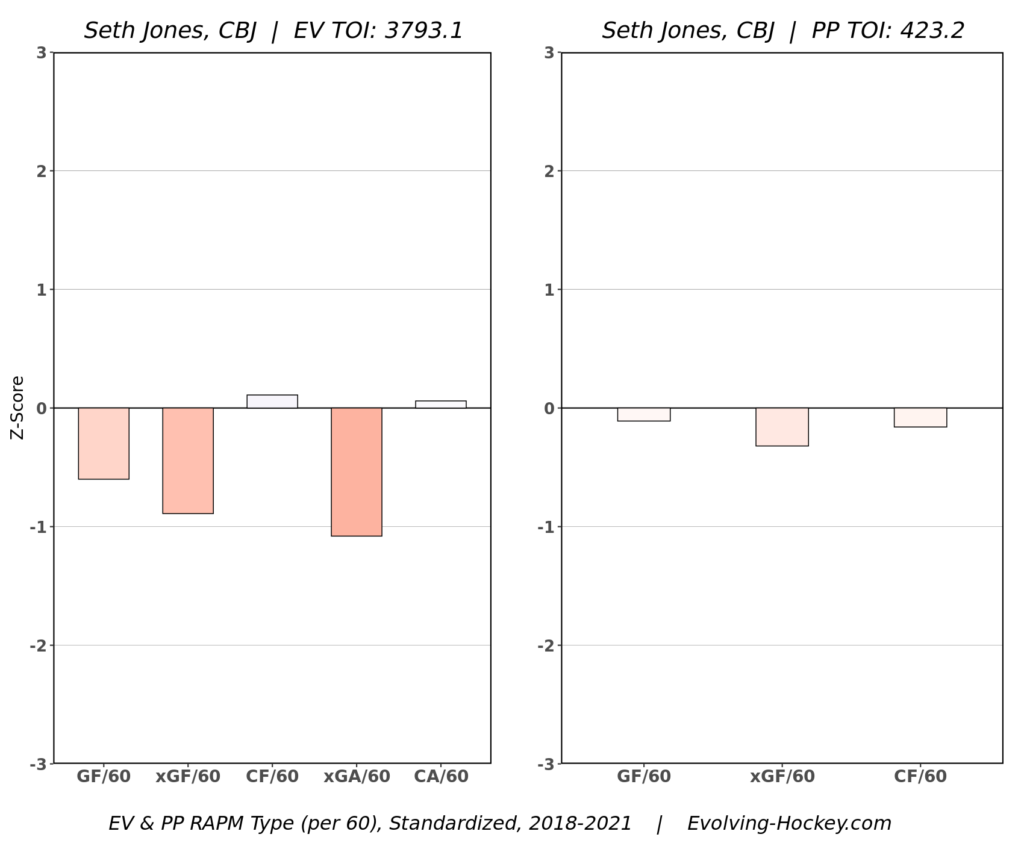 When watching Jones, it’s very easy to see the offensive talent. He moves the puck well, he is a smooth skater, and he sees the ice well. He’s fantastic with breakouts. I don’t think anyone is challenging his talent.

The issue is Jones struggles away from the puck. Jones loves his his physical play. That’s great. But he also takes himself out of position when he does so, and rarely does this lead to an actual turnover. This is the kind of physical play that we generally get frustrated with Brendan Smith about. Being physical just to be physical doesn’t help if you aren’t creating turnovers.

It’s easy to chalk this up to ice time and opposition faced, but this was actually reviewed by JFresh, and I want to call out a specific piece here.

But let’s actually dig into Jones’ usage a bit. Seth Jones played the 7th most minutes per game among defencemen this season. But it might surprise you to learn that according to PuckIQ, Jones actually wasn’t deployed against top competition that much, ranking 66th in that category. In terms of time against top competition as a percentage of ice time, Jones ranked 139th out of 233, 5th among Jackets defencemen.

The TOI shows trust, but it appeared Jones was mostly getting offensive trust. This plays into the massive defensive struggles that have been noted above. In the right system with the right team, that might work. But with the Rangers, it won’t.

For the Rangers, if they are to make a splash for grit, they are better off spending money and assets elsewhere. If the Rangers are looking at Seth Jones, it would be a massive waste of acquisition cost that could be used to address a bigger roster issue. Defense just isn’t a need for them.

The kind of cost for Jones might require assets that the Rangers would use to land Jack Eichel or another big fish center. Chris Drury has a plan, and Jones would be a deviation from the plan. He’s just not a fit for the Rangers.