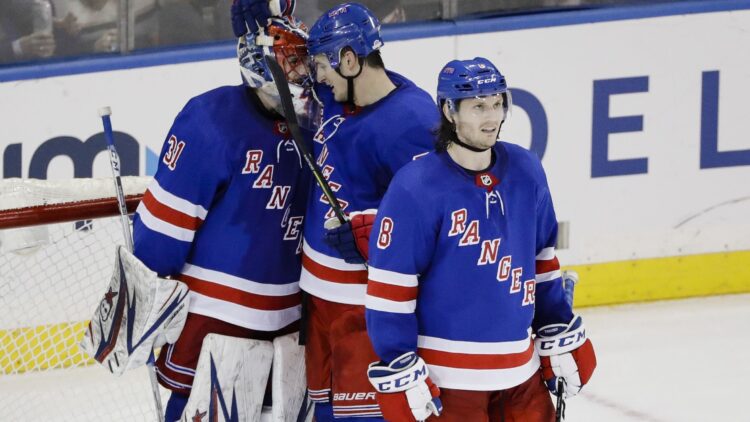 He’s only been here for two seasons, but Jacob Trouba is already one of the more divisive players on the blue line. The biggest issue doesn’t even seem to be his on-ice play, and is more about his contract. Separating Trouba from the contract is tough, but he’s been good on the ice. Is it fair that the evaluation –and thus my subjective report card grade– of Jacob Trouba is impacted by the contract?

Trouba played just 38 games this season, putting up 2-10-12 with limited powerplay time. That’s an 82-game pace of 4-21-26, which is on pace with last year’s offensive numbers. However it is a far cry from his numbers with Winnipeg, when he was used significantly more on the powerplay.

Trouba, as Rob has pointed out regularly, generally plays better with a defense-first partner. Through his first two seasons here, he hasn’t had that partner. This year he was with rookie K’Andre Miller, who is more of an offense-first guy. So there is an argument that he has not been put in a position to succeed.

Trouba also has seen his powerplay time slip a bit. most notably by not being on PP1. In fact, he hasn’t been on PP1 for most of his time with the Rangers. That’s not necessarily Trouba’s fault, as last year Tony DeAngelo earned it, and this year it was Adam Fox. 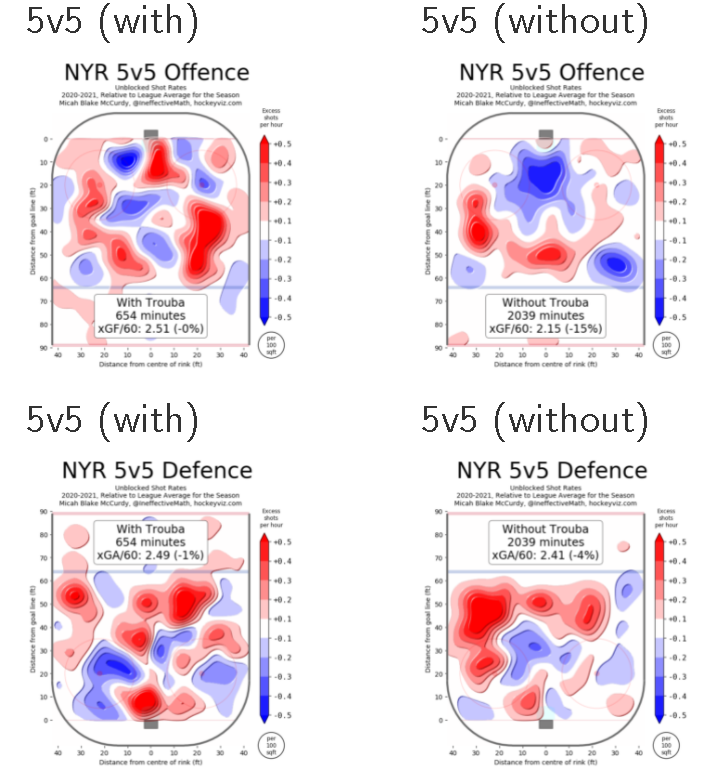 Despite not necessarily “being worth the contract,” a point we will get to, Trouba’s on ice performance is still good. He’s not a detriment to the team, he’s a net-15% positive on offense and a net-3% negative on defense. The defensive impact is a little surprising, as I thought it would have been better. Especially since the Rangers basically fell apart when he was knocked out for the season in April. 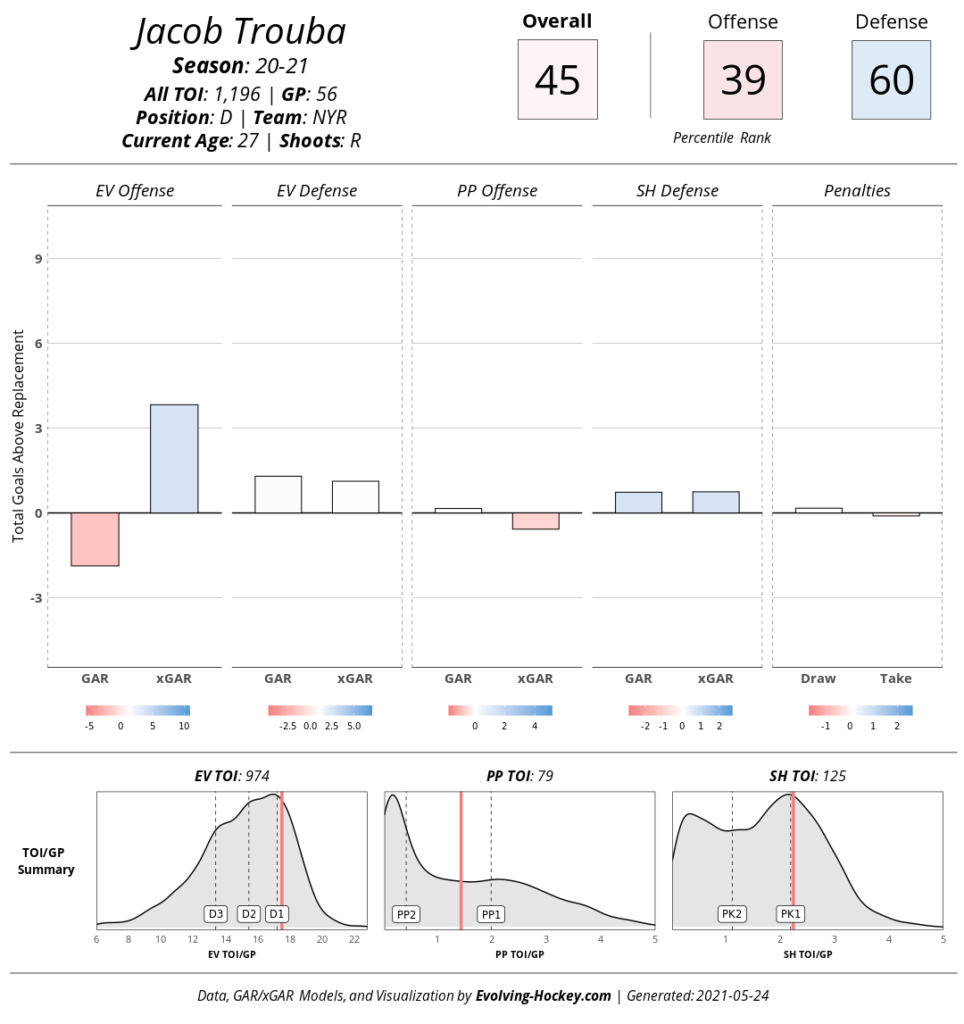 What I find to be interesting is that the xGAR models don’t necessarily jive with the shot heatmaps. None of this is gospel, and just another piece of the puzzle that is Jacob Trouba. The one thing I do want to focus on is the offensive xGAR vs actual GAR, which shows a significant difference. This suggests that Trouba’s on-ice presence –offensively– should have been much more pronounced on the score sheet. It also suggests that Trouba’s offensive numbers were impacted here.

Does the deployment and partner impact it? It could. But the play without the puck (the expected numbers) show that he should have had a sexier stat line.

The rest of the player card above is about expected.

Intangibles are often spoken about, but it’s difficult to quantify. There are two things I want to focus on regarding Trouba’s impact in the locker room. The first, as mentioned above, is that the Rangers fell apart once he went down in April. It’s what started the slide and led to all the drama to close out the season.

The second is the oft-mentioned pep talk against the Devils. The Rangers needed to sweep that four-game set against the Devils to stay relevant, but they weren’t really playing well enough to get the sweep. It was Trouba that rallied the Rangers to come back from a third period deficit to help get the win. At that point in the season, it was a huge win.

The team rallied around Trouba, as the coaching staff left him to address the locker room in between periods. That’s potential captain material right there. We all talk about potentially Chris Kreider or Mika Zibanejad, but it was Trouba who commanded the locker room and rallied the troops. That shouldn’t be overlooked.

Grading Jacob Trouba’s report card is much harder than grading Adam Fox. He’s certainly going to be overpaid and probably won’t have many seasons where he gets to full contract value. That said, he is still a leader on the team who has more of a positive impact than his detractors might like to admit.

I think the true barometer for Trouba will be with a better coach, system, and a better position to succeed. However I can certainly understand the disappointment that he isn’t the 1RD that folks hoped he might be when trading for him.