The debate on Jack Eichel will carry on until the Buffalo Sabres make a decision on his future. This does have some Rick Nash vibes to it, and perhaps it is inevitable that the Rangers land him. We know they made a realistic offer for him last year, and we know that Jeff Gorton was interested. What we don’t know is whether or not Chris Drury is interested. But if the Rangers go this route, then they must also keep Mika Zibanejad to go with Jack Eichel.

Center depth wins championships. The Rangers, at the moment have a decent 1-2-3 punch with Zibanejad, Ryan Strome, and Filip Chytil. Adding a bonafide star as the 1C just solidifies that depth further. It appears that the Rangers plan on having Eichel and Zibanejad be their top two centers of the future.

This is an important aspect that is being missed, as many are already looking to deal Zibanejad as soon as Eichel. But if that were to happen, the Rangers are making a sideways move. Replacing Zibanejad with Eichel doesn’t move the needle enough. Adding him to Zibanejad, thus shifting the centers down a spot in the lineup, creates depth not many can match.

In this scenario, one of Strome or Chytil is gone. The smart money says it’s Chytil, but salary cap considerations say it’s Strome.

Trade cost is never as much as it seems

When was the last time a star player got what he was worth in a trade? If you consider the Laine/Dubois swap a star trade, then maybe that? But that was a rare situation of two stars needing a change. Look back at Tyler Seguin, Joe Thornton, Rick Nash. None of them went for what we thought would be “fair value.”

However this is not last summer. Eichel now has a neck injury, and the situation appears to be approaching untenable. This is no longer a “may” trade Eichel, but a “will” trade Eichel. In this situation, the Sabres lose leverage. The only hope they have is that a team like LA offers up a Quinton Byfield, in which the Rangers don’t have anything to match.

They both fit under the cap 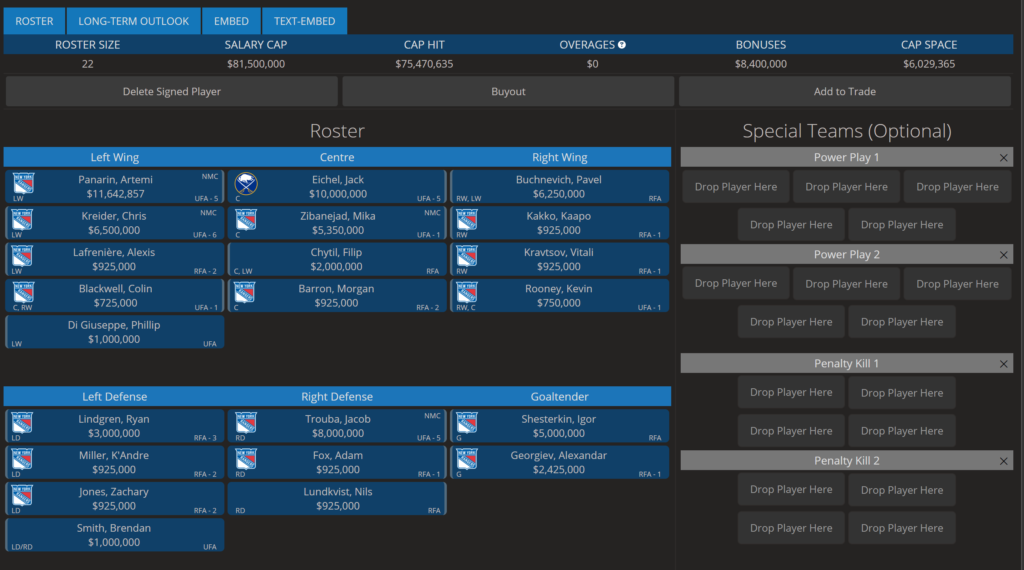 The above team trades a lot of futures for Eichel, while also including Strome for salary offset. I re-signed Phil Di Giuseppe and Brendan Smith as placeholders for 13F/7D spots just because it was easier on the CapFriendly simulator than finding a name I liked.

The depth names don’t matter, it’s the top-18 and the cap space. There’s $6 million to play with on this roster. So even if the Rangers move Chytil instead of Strome, there’s room.

The above shows the future state, when the Rangers would need to re-sign ZIbanejad, Fox, Kakko, and Kravtsov. There’s $20 million to work with in a flat cap. If you assume the following breakdown, there’s enough room.

These are very rough estimates, so don’t quote me on this. It gets a little hairy since that won’t leave the Rangers with much flexibility. However as we’ve seen with Tampa this year, there are ways around it. The important thing is to acquire as much skill as possible and pay that skill. The rest works itself out. If the Rangers land Eichel, then they need to keep Zibanejad as well. Otherwise what’s the point?