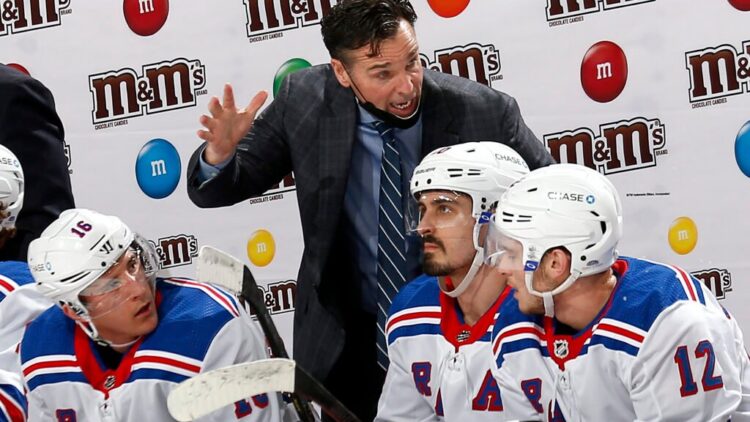 The Rangers may have been officially eliminated from the playoffs this weekend, but only the hopelessly optimistic thought they had a chance this season. In this division, with this drama, with COVID, and with the youth, everything needed to go right. Naturally it didn’t. But next year, as I’ve been saying, is the year they get back. The talent should get them to the playoffs, but to truly compete, David Quinn will need to make some tactical adjustments.

This is a big one, as the Rangers should have a lethal powerplay. They were, instead, 13th in the league this season. Given the skill, they should be better.

Yet they seemed to be generating high quality chances at a much higher margin. So what gives?

The first thing is they became predictable. The first look in 2021 was always the left circle. This checks out, as it’s their only off-wing setup on PP1. While they did generate more chances this year from the right circle, the lack of a one-timer option means those cross ice passes require that extra split second before a shot gets off. In the NHL, with NHL goalies, that matters.

The second is that they focused almost entirely on the top powerplay unit, Again this checks out, as look at that top unit. However the team went as they went. When they went cold, and that does happen in hockey, the team went cold. The top unit received at least 150 minutes at 5v4, with it varying slightly outside of Panarin/Zibanejad. Only Pavel Buchnevich received over 100 minutes and wasn’t on the top unit. After that, it’s about 50 minutes each. That simply isn’t enough PP time. That second unit didn’t generate much, to be fair, but getting one-third the time has that effect.

The Rangers will need a lethal powerplay. Given the skill they have, they should be able to put together a pair of powerplay units that can be close to automatic. Getting a second one-timer option on both units is a must. That’s a gimme.

This is something I’ve been harping on for a few years now. The Rangers give up too much space in the neutral zone. This leads to the opposition gaining speed into the offensive zone, and the Rangers are already on their heels. Steve Valiquette addressed this on a broadcast, and showed the second layer here, which is the back check forming defensive triangles.

The counter point here is that since the Rangers give up the space in the neutral zone, the back checkers simply can’t catch up. It’s not the lack of a back check, it’s that there is too much speed and space given. That’s on gap control and the message. Gap control will come as the kids grow and the third pair gets upgraded. But the message and the system has to be upgraded as well.

It’s time that the Rangers, at the very least step up before the top of the circle. The best teams in the league will walk all over the Blueshirts if they allow this kind of transition speed. It doesn’t matter how aggressive the back check is if they can’t catch up to the play. And don’t be fooled, the good coaches know the Rangers back off and they change up their game plan accordingly.

In game adjustments are something that we mention here, but haven’t gone into much detail yet. It’s difficult to explain away some of Quinn’s adjustments, or lack thereof. The common complaint is that no matter what, Quinn runs his systems and doesn’t adjust for teams or coaches he is facing.

The lack of adjustments was put on display this season, as the schedule called for many two-game sets against the same team. When checking the game logs, there are very few –if any– instances where the Rangers played well in the first game without a significant drop off in the second. This is admittedly an archaic way of looking at things, but it gets the point across. Other teams adjust, meanwhile the Rangers seemingly do not.

In the end, all three are tactical adjustments that David Quinn and his staff will need to make for the Rangers to reach their true potential next season. The Rangers are going to be very good, very quickly. But a team is only as good as its coach. To truly compete, and to truly make noise, the Rangers need to be firing on all cylinders.