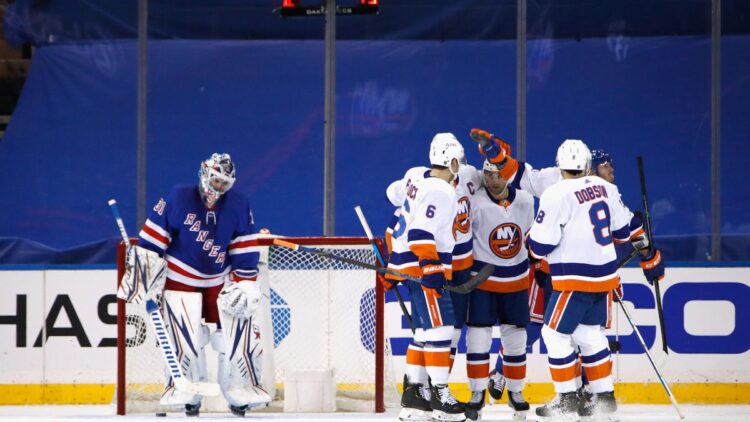 There is nothing worse than having your season ended by your arch rival. The Isles did just that, effectively ending the Rangers season. The Rangers were shorthanded, without Jacob Trouba and Chris Kreider, and were basically walked in the first period. The Isles jumped out to an early lead, and a Barry Trotz team doesn’t relinquish leads often, or ever. Getting blanked by the Isles just adds salt to the wound for the Rangers.

This loss effectively ends the Rangers season. They won’t catch the Isles now, that we know. *Maybe* they can catch the Bruins *IF* the Bruins actually start losing games. That obviously didn’t happen tonight, so this more or less seals the deal for the Rangers. Time to call up Morgan Barron and Tarmo Reunanen.

Eberle with the dish. Komarov with the goal. #Isles with the lead. pic.twitter.com/FYuG62tzti

Giving up the blue line, even with the defensive triangles, is stupid. It opens up plays like this. Doesn’t help that Mika Zibanejad changed after getting beat to give up the blue line.

Josh Baily cut through the slot and dropped for Oliver Wahlstrom, who shot back the other way. Wahlstrom has a great shot, and if he’s given room, he will score.

That puck movement off the faceoff – SMOOOOOOTH pic.twitter.com/gblI2xh7qy

Lose the faceoff clean, allow the cross ice pass to an unprotected guy in the slot. Always a good idea.

Shot Heatmap – Did they get off the subway?

This is just bad. I don’t know how else to put it. This was a must win for the Rangers, and to lay an egg this badly is atrocious all around. Most of the team forgot they had a game.

When Brendan Smith is the only guy who is “good” that is a problem. Not much more analysis is needed here.

Listen, we all know this was coming. It would have been nice for the Rangers to continue this into the last week of the season, but it is what it is. For me, this is progress. The Rangers took their relevancy much further this year than last, which was further than the year prior. Progress is progress. Next year, it’s the playoffs. And hopefully less games when the Rangers get blanked by the Isles.