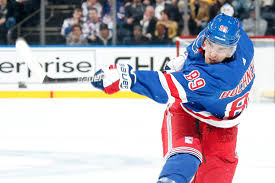 Well the Rangers made it more stressful than that had to be, but took care of business with a 6-3 win over the New Jersey Devils.  The Rangers have now won three in a row and have recorded points in five straight.  The win this afternoon leaves them 4 points behind Boston for the final playoff spot in the East Division, with the Bruins having two games in hand. Here are a few thoughts and reactions to the win.