The Rangers should move Vitali Kravtsov off the fourth line 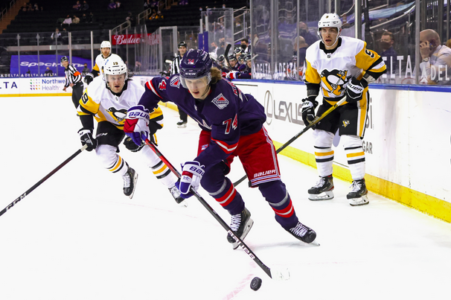 On Thursday night, Vitali Kravtsov almost registered his first goal of the season. That was, of course, until Devils’ head coach, Lindy Ruff, challenged the entry into the zone for off sides and successfully had the goal overturned. While he’s first regular season NHL goal may have been taken from him, it does not change the fact that he has been performing very well so far. This is despite spending all seven of his NHL games on the Rangers’ fourth line, which isn’t the best use of Vitali Kravtsov’s skill set.

David Quinn’s choice to put Kravstov on the fourth line is by no means an outrageous decision. There is obviously something to be said for the jump from the KHL to the NHL. Time to adjust is important, after all. However, if Quinn is the coach all about a player “earning” a promotion to another line, it is time for him to consider changing Kravstov’s current situation.

Kravtsov has recorded just one assist in his seven games in the league thus far, but has looked to be one of the most dominant skaters on all lines.

There has only been one game he has played since coming to New York where he has not recorded a shot on goal (Hockey Reference). He is driving play and constantly putting himself in dangerous areas of the ice to generate chances on net. 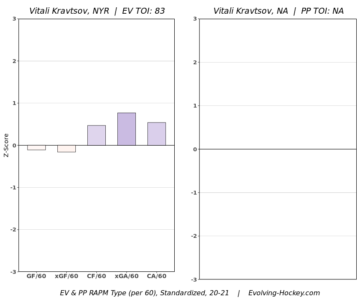 His underlying numbers reflect what can be seen on a nightly basis. Despite playing with two skaters with Corsi percentages in all situations in the forties – Brett Howden at 44.35 and Kevin Rooney at 40.28 – Kravstov has managed a Corsi of over fifty percent (56.65).

In addition, Kravtsov’s Corsi differential is the only positive number recorded on his line – and it is pretty significant. Compared to his 56.65, his Corsi against is only 47.09 – a difference of 9.56.

Unlike his linemates, Kravtsov is also on the positive side in terms of goal differential in all situations. He is carrying a 2.16 expected goals for and 1.71 expected goals against (0.45).

While not necessarily a shockingly positive number, it is far superior to the to those recorded by Howden and Rooney (-1.15 and -1.05, respectively).

Obviously, these numbers need to be taken in context. Kravtsov’s production thus far comes in far more limited minutes than to his teammates. It’s seven games versus 43 games. However, there is also something to be said for what might happen if given an opportunity to make more of an impact.

The major takeaway should be that Vitali Kravtsov is significantly outplaying his current line mates. And the good news is, they have not started to drag down his performance… at least not yet.

Colin Blackwell had a solid night against the Devils playing with Ryan Strome and Artemi Panarin. However, the second line may be a really good spot to slot in Kravtsov for a trial run. This assumes that David Quinn doesn’t want to go ahead and overhaul his lineup.

As you may recall, putting Kakko on a line with these two players vastly improved his performance and helped build some confidence. While he has been quieter as of late, you can still see the impact as he skates with Filip Chytil and Alexis Lafreniere and continues to generate offense.

At the very least, Vitali Kravtsov has earned a chance to see the third line. But I would rather see Blackwell moved back down to the fourth line over Kakko. While the Rangers have been able to generate more offense as of late, moving a buzzing Kravstov up in the lineup could elicit even more.

Kravstov has proven that he deserves more of an opportunity than he is getting. Giving it to him is a good way to encourage further development in these early moments of his career.