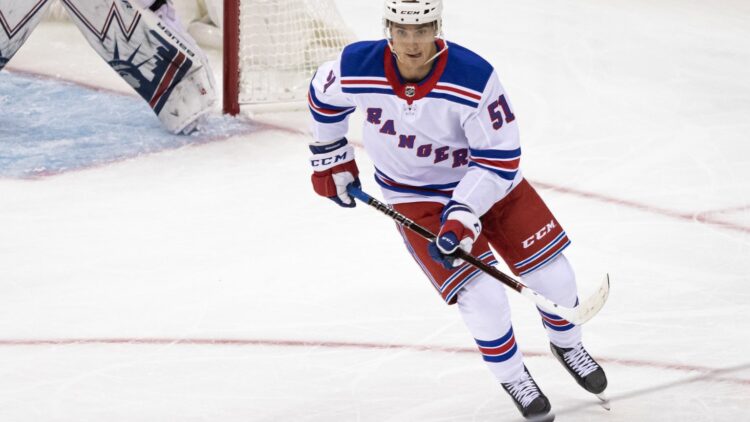 The trade deadline has come and gone with the Rangers standing pat. Zac Jones was the big add when the Rangers signed their draft pick and burned a year of his ELC. But aside from that, the Rangers didn’t do anything. They will be allowed four non-emergency call ups through the end of the season. Those will be the only roster adds going forward. They may not use all four, but it may be easy to project who the Rangers will use these post-deadline call ups on.

Morgan Barron is forcing the Rangers hand. He’s at a point per game through 16 games in the AHL, with nine goals and seven assists. He’s played both wing and center, erasing doubts that he needed to shift to wing to be a legitimate pro player.

Jeff Gorton spoke highly of Barron in his post-deadline presser, noting they might want to get a look at him. Given the Rangers currently have Kevin Rooney or Brett Howden as their 4C, giving Barron a look seems like a lock.

The wrinkle is that David Quinn likes his fourth line to be a defensive line. Barron is certainly a two-way player, but he may not get any time with skill players on the Rangers. He’d likely be with Kevin Rooney and Colin Blackwell. That’s fine, as neither are slouches, but we likely won’t see him get time with Artemi Panarin.

Tarmo Reunanen is having a strong season with Hartford. Before the Jones signing, he was likely a lock to be called up in some capacity to close out the season. Now, maybe not so much. He’s looking strong in Hartford, with three goals and 14 points through 16 games. There have been questions about his defensive play though.

Reunanen is slipping on the depth chart, due to no fault of his own. He’s still a strong player and skilled defenseman. But the Rangers, with Jones and Matthew Robertson as the top prospects, are stacked at LD. There’s only one LD spot available now, if it is even considered available anymore.

Giving Reunanen a look may not be for their own needs. It may be to put him in NHL minutes to showcase him for a trade over the summer. The Rangers can’t keep everyone, after all.

Ty Ronning is having a bit of a resurgence this season. After struggling to adjust to the pro level, the 23 year old is having a breakout AHL season. With 14 points (8 goals) in 10 games, he’s been one of Hartford’s most reliable players. He’s tied for second with Reunanen in team scoring, both two points behind Barron.

Ronning isn’t someone the Rangers would call up just to get a look. He’d be a specific call up to fill a role. Ronning is classified as a skilled grinder, so he may be an injury call up if something happens at the NHL level.

Ronning’s call up may be a bit of a stretch, as there’s no real evidence he will be able to take his game to the NHL. This is his first good season in the minors.

The best of the rest

Depending on how things play out, we may see another Tim Gettinger cameo. If Gabriel Fontaine wasn’t hurt, he might have received a look. But now it doesn’t look like it.

For some reason people are calling for Mason Geersten because he’s big. I don’t see that happening. Yea he’s big, but that’s about it. He’s being converted to forward, which means whatever the Rangers see in him won’t get fine tuned for a while. He also isn’t a prospect. He turns 26 in four days.

That’s really it from Hartford. There are a few good options. As for Rangers call ups post deadline, I’d bank on Barron and maybe Reunanen. The rest require something drastic to happen at the NHL level.