While much of the offseason discussion has been around a big name center and/or retaining Pavel Buchnevich, one key player has not been mentioned too much. That guy is Ryan Lindgren, who is an RFA at the end of the year and will be needing a new contract. While it isn’t expected to be cost prohibitive, Lindgren might be a candidate for a longer term contract, instead of a bridge deal.

Both a bridge deal and a long term deal have their pros and cons. There’s a case for both for Lindgren. Factoring into that decision will be Lindgren’s unique skill set, specifically as a defensive stalwart who delivers the big hits for the team. He’s a warrior, cut in the Dan Girardi mold, but he isn’t a black hole when driving offense. He’s a smooth skater, a good puck mover, and solid defensively. What he lacks, which will likely keep his cost down, is points.

The case for a bridge deal

Heading into this season, the big question on Ryan Lindgren was whether or not he was a product of playing with Adam Fox. He’s put those concerns to bed, as he’s emerged as the top LD on the team. Despite his 100 game goalless streak, he’s been the go-to guy for tough minutes. Not only is he doing it with Fox, but he’s doing it away from him as well. There’s also a big case for putting him with Jacob Trouba to help free Trouba offensively.

Where a bridge deal would be beneficial for Lindgren is in case this season is a fluke due to the presence of Jacques Martin. That’s a bit of a stretch for sure, and it’s a pretty weak argument. Another area is injury insurance, as Lindgren’s play style and propensity for taking flying projectiles to the face are well known.

At 23 years old, a bridge deal would ensure Lindgren gets another contract with the Rangers before heading to free agency. It would keep his cost down for the next 2-3 years before getting a bigger payday. The comparable contract that comes to mind is Tampa’s Erik Cernak. They have similar play styles and production. 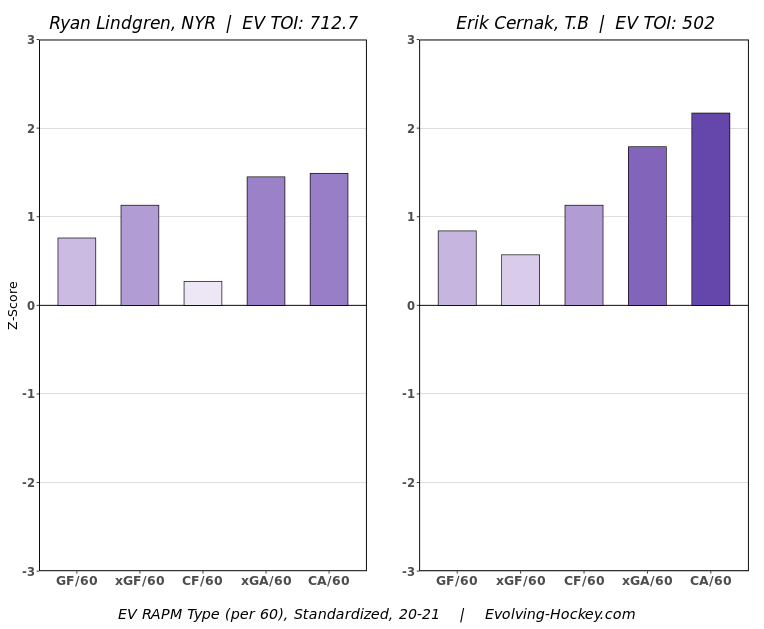 Cernak is in the first year of his three year bridge deal with Tampa that carries a $2.9 million cap hit. He’s the same age as Lindgren. Same production. Same peripherals. His bridge was signed last offseason, and with a flat cap, it’ll be the same percentage cap hit next season.

At $2.9 million, a Lindgren three year bridge deal is manageable while the Rangers figure out what is going on at center. Mika Zibanejad’s next contract looms large. As do Adam Fox’s and Igor Shesterkin’s.

The case for a long term deal

Given how much cap space the Rangers have, they can afford a few long term deals for the players identified as part of the future. It seems like Lindgren is one of those guys, as Steve Valiquette noted he may get a letter soon. With that kind of leader identified, keeping long term costs down is critical. Given the unknown big contracts, getting Ryan Lindgren locked into a long term contract could be ideal.

A long term deal is more expensive up front. But if you assume continued progression, it becomes a discount very quickly. That’s the benefit of locking up Lindgren for 5-6 years. That is, if the Rangers go that route. Finding a comp for Lindgren long term is very difficult. I was looking at Rasmus Andersson in Calgary, as it’s as close as I can get. 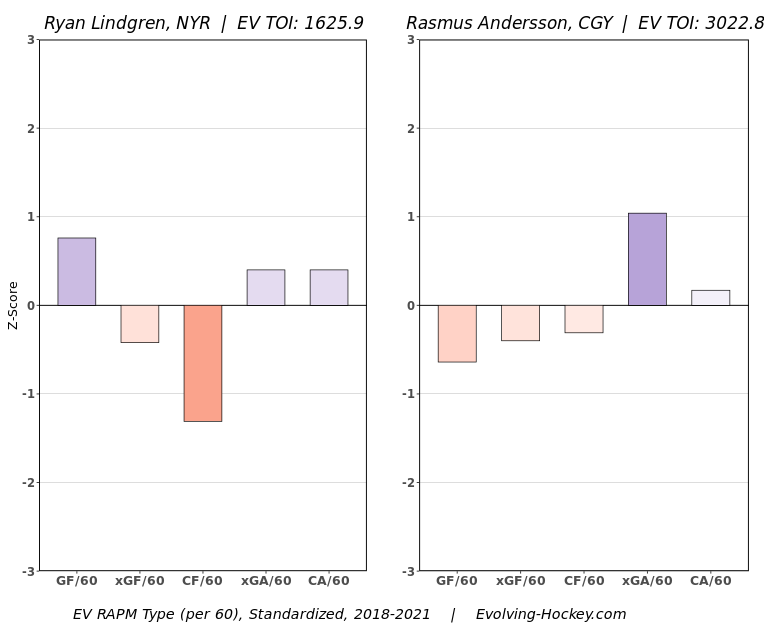 This is a multi-year RAPM, as opposed to the single year above. It takes into account Lindgren’s rookie season, which was far worse than this year. His offensive point production is close, even if the peripherals have set Lindgren apart. He’s somewhat close to Andersson, but it’s not a perfect match. Let’s take this with a grain of salt.

The key thing is Andersson is in the first year of a six-year, $4.55 million deal signed just before he turned 24. This was also signed with a flat cap. This might be the best comparable for a long term Lindgren deal. Six year at $4.55 million is definitely something folks would sign up for.

Honestly, there is no wrong answer here. For me, I’d prefer a long term contract for Ryan Lindgren. If he’s identified as a future cog, then just sign him now. In three years, when cap space is at a premium, the Rangers will likely be happy they have him at just $4.55 million. If he falters, then it’s not too big of a cap hit to be concerned about. Both are very manageable options for the Rangers.