A major topic this season has been Alexis Lafreniere’s play on the ice. He has a distinct lack of points, which is hard to ignore but easily explained away. There are already very grumpy people calling him a bust, which is asinine at this point. But hockey is more about points, even if you want him to be Connor McDavid right out of the gate. Lafreniere hasn’t looked lost out there, which is probably the most important thing to consider right now.

Lafreniere’s isolated results show he drives offense, even if the points aren’t there. He’s a net-positive 10% difference in expected goals, suggesting the on-ice SH% of 7.05% (4th worst on the team) is partially to blame here. The skill is there, the luck and perhaps the quantity of shots on goal isn’t. Something like this tends to even out over time, especially if we see the lineup get shuffled a bit.

Defensively, Lafreniere does need some work. But that again is expected from a rookie. He’s not a black hole defensively, but the Rangers do perform better without him on the ice in this aspect of the game. 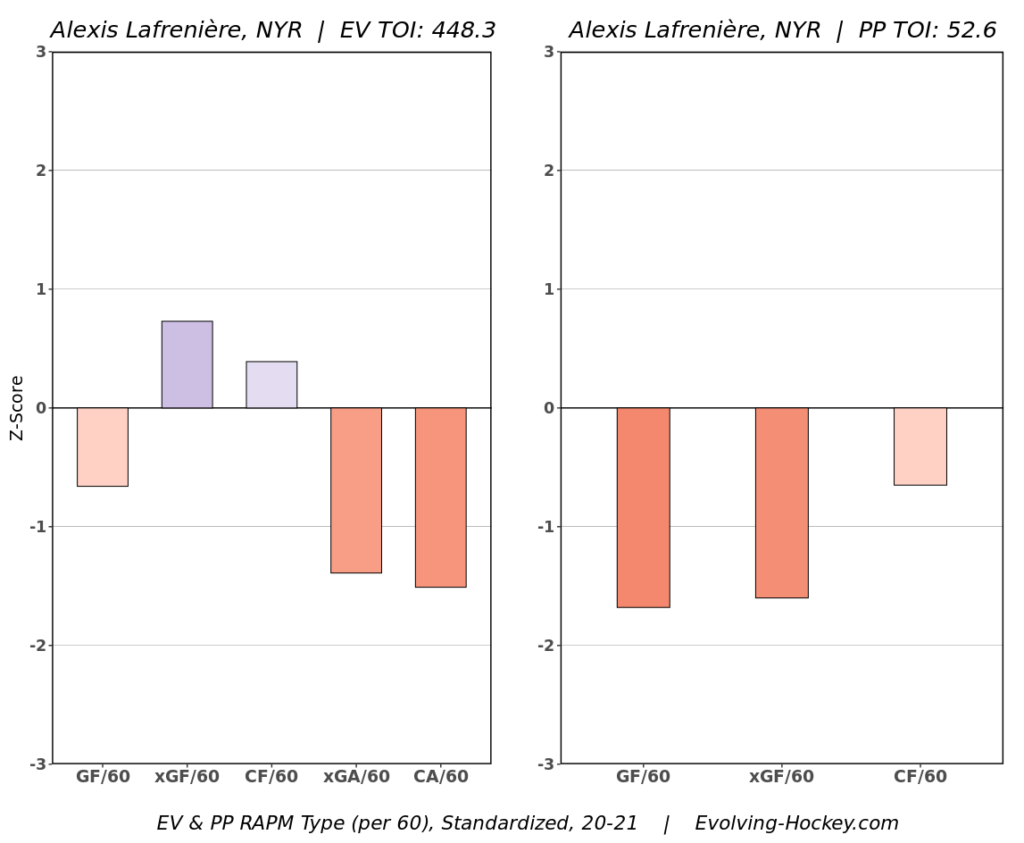 The RAPM chart is consistent with the isolated heatmaps, showing that Lafreniere does struggle with defense at the moment, but is an offensive play driver. Something to take note of is Lafreniere’s GF/60, which is well below his xGF/60. This suggests, as mentioned above, that the on-ice shooting percentage is impacting his points and the overall perception. When there is such a gap, it’s either luck –on-ice SH%– or lack of individual skill. I think we can all agree it’s not the latter.

What this suggests is that Lafreniere will put up more points with more ice time, both at even strength and on the powerplay. It’s about a balance of getting Lafreniere the ice time he needs to develop, while also trying to enforce a winning atmosphere. We can debate ’til the cows come home about how to achieve this, and there are no wrong answers (in theory).

There’s nothing inherently wrong with Alexis Lafreniere’s rookie season. He’s doing what he can with what he’s got so far. The easy answer is more ice time, since there’s nothing in his play that shows he hasn’t earned it. The defense will come as he learns the NHL. The offense is there, it’s just the points that are lacking. Ice time matters, and this is why it’s a sticking point lately.