NY Rangers Trends: The Hot Hand is alive in March 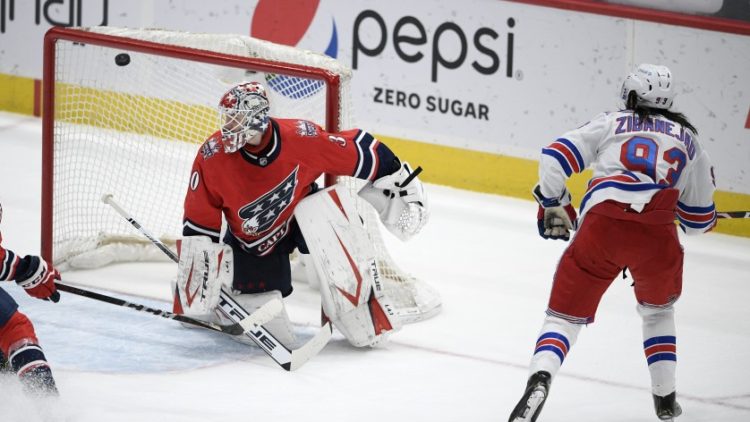 It was only 27 days ago when Rangers fans were wondering what the team had to do in order to score more goals. When I published my last trends piece they sat 28th in 5v5 shooting percentage and it certainly felt like the Rangers were due for a down shooting year. In true March Madness style, the NY Rangers found their hot hand and have ridden it to an 8-4-1 record thus far for the month.

This is not to say that it’s been only shooting where the Rangers have succeeded in their last 14 games. They are still performing as a better-than-average team when it comes to Expected Goals For % (shot quality). And, in a positive development, have also leveled out towards average in Corsi For % (shot attempts). While they’ve certainly been scoring a lot lately, what has made them dangerous is their top-10 team defense in terms of shots and scoring chances against. How this team is getting its results is now officially a far cry away from the Tortorella and Vigneault years. 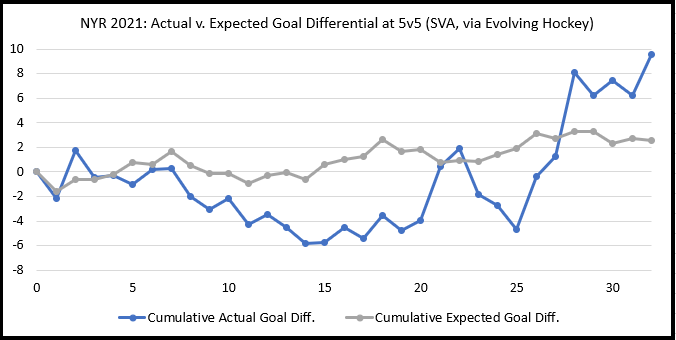 While I’ve mentioned previously that the Rangers were underperforming in the standings, the month of March is one part positive regression and one part over-performance. Were the blowout or solid wins against the Flyers, Bruins (3/13), or Devils (3/6) deserved? Of course. I only advise to tread with caution because the NY Rangers Hot Hand only lasts for so long – and let’s just hope the Rangers descent from their shooting peak is soft rather than a complete crash. 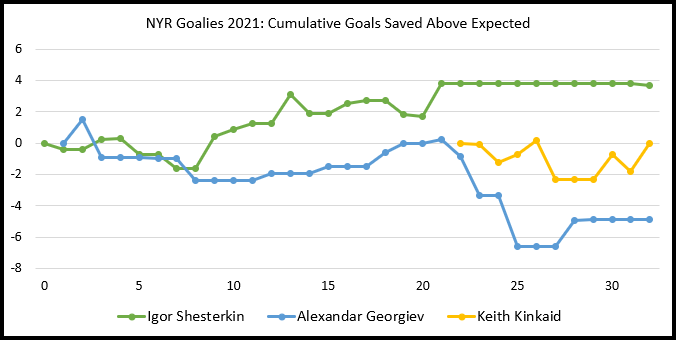 Before we get to the skaters, let’s quickly look at the goalies. We all experienced the pain of Alex Georgiev’s struggles in the start of the month. His last two starts have been fine to good which was much needed. And while Keith Kinkaid hasn’t been perfect (2 or 3 games were not pretty), he held the fort down while we all waited for Igor Shesterkin to return. Shesterkin will be owed a new contract this offseason, which should be interesting to see how it shakes out. His injury absence completely solidified that he is the Rangers best goaltending option whether or not there is some imaginary clock ticking somewhere. 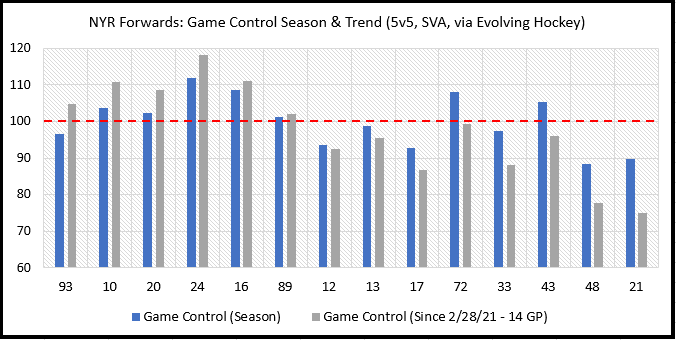 Up front, the Rangers best forwards continue to lead the way. As a reminder, Game Control is the sum of Corsi For & Expected Goals For percentage. It gives a rough idea of who is controlling the shot & scoring chances while on the ice (100 = average). The chart is sorted by the difference between their season and last 14 GP, largest to smallest being left to right.

A few players jump out at me. Mika Zibanejad is back to being on the winning side of the puck and very few would disagree with that. He personifies the NY Rangers hot hand right now. Artemi Panarin has come back and made his usual instant impact. Chris Kreider, Kaapo Kakko, Ryan Strome, and Pavel Buchnevich have all turned it up a bit as well. This is all a good sign if the Rangers are to get back into the playoff picture.

On the negative side, the bottom six has been inconsistent. Filip Chytil is clearly still recovering from his injury. However it is more fair to say he’s been just average as opposed to bad, especially when you look at where he was before his injury. About the same can be said about Alexis Lafrenière and Colin Blackwell.

As with all of my writings, Brett Howden should not enter back into the lineup when he is healthy again. Finally, with Vitali Kravtsov joining the fold, the question becomes who comes out? For me, it would start with Brendan Lemieux. He may be very involved in most games, but I would argue very little of it is objectively a positive impact. He, Gauthier, and Phil Di Giuseppe may need to yo-yo in and out of the lineup on the fourth line if Kravtsov does come in and succeed on the third line. 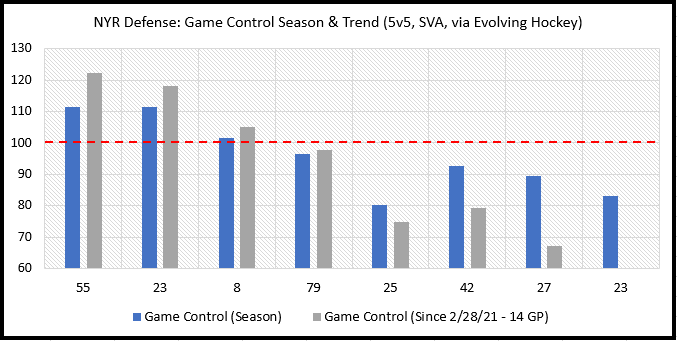 Out back, the story is somewhat similar as to what was occurring a month ago. Ryan Lindgren & Adam Fox have been a dynamo pair. Since 2/28/21, Lindgren-Fox has run a 68.8% expected goals for rate at 5v5 (via Natural Stat Trick, score & venue adjusted). K’Andre Miller-Jacob Trouba has also been good lately, running a 53.9% in the same time period. These pairs soaking up the minutes they do while succeeding is a huge reason for the March revival. While I still firmly believe Miller-Fox & Lindgren-Trouba should be tried (and it was during practice!) to better match complements, right now it’s all working.

With Jack Johnson & Tony Bitetto out, Libor Hajek has solidified being the 6th man in with Brendan Smith. As the chart shows, Hajek is still a clear rung below the rest of the defense, even with Smith stabilizing him to the best of his aging ability. I would love to see more of Tarmo Reunanen or another Hartford option while the top four are playing the way they are.

This to me is where hockey coaches get in trouble. Your 12 best players should be in the lineup, rather can conforming to some archaic idea of roles.

Unlike a month ago, this writing isn’t being fueled by relatively consistent poor lineup choices. With Howden out and the top four defense covering for Hajek-Smith, the Rangers are simply in a good spot to keep winning – even with the risk of the Hot Hand extinguishing. That being said, I insert the above tweet by George Ays (an OG Rangers stats twitter follow, btw) in the vein of continuous experiment and improvement. George quotes Vince Mercogliano, who is stating that NYR views Julien Gauthier as more of a top 9 winger rather than a fourth line winger.

These roles may have been carved out decades ago when the talent gap between the best player and the worst player was much larger. However they really don’t have a place in the modern game. Simply put, NHL coaches should be trying to identify their 18 best skaters per night and deploying them in an appropriate manner relative to their skills (and who they’re complemented by). The modern game, for coaches, is the ability to roll 4 lines in order to maximize the effectiveness of the top six forwards. Specifically to Gauthier, he can clearly skate and has offensive ability all while being defensively competent (unlike Howden). He helps complete that goal of being able to run all four lines confidently.

Overall it is safe to say that spirits are up among the Ranger fandom. Their actual playoff chances might be as high as the feeling of blowing the Flyers out twice in eight days. But if the Rangers keep putting up decent results with a little more consistent scoring chance creation, we could all be in for a fun April.