Blowouts catch up with Rangers, no-show against Flyers in loss 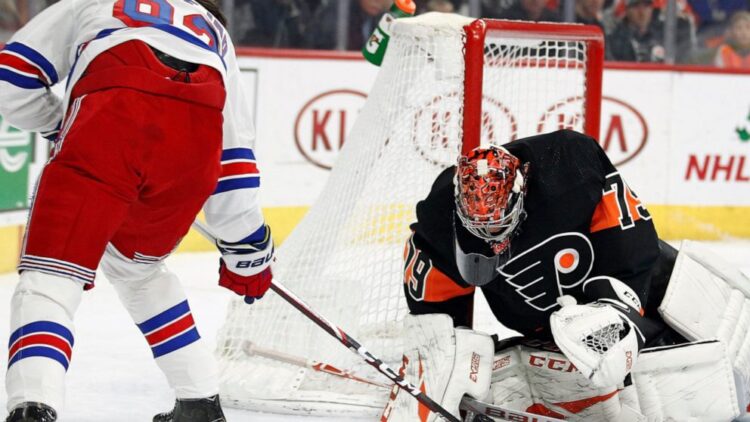 There are drawbacks to making the Flyers look like the New York Jets for two straight games. The Rangers took a nap on this one, and were dominated from puck drop to final whistle. If not for Igor Shesterkin, the Rangers would’ve lost this one 9-1. Shesterkin kept this close, and the score does not reflect the pace of play in this one. The Rangers truly did a no-show.

Sometimes games like this happen, but it couldn’t have come at a more inopportune time for the Rangers. They didn’t *need* this win, but they could have really used two points against a struggling team that they’ve crushed in the last two. Then again, this was your classic trap game. The Rangers had won three in a row, and the Flyers lost four in a row. Both were bound to end at some point.

This is a simple matter of being up a man. Mika Zibanejad was so low at the far post that Phillippe Myers had to cover Chris Kreider in the slot. Ryan Strome threaded the needle.

This was a good fake by Shayne Gostisbehere at the point to get the open lane. Nolan Patrick provided the screen and the tip.

This was bound to happen the way the Rangers were playing. Kevin Rooney broke up a centering pass, but the Rangers couldn’t control the puck. Very quickly the puck wound up on Samuel Morin’s stick for a one-timer from the point that got through Igor Shesterkin

Shot Heatmap – Not a good showing

The Rangers took this game off. Maybe outscoring the Flyers 17-3 in the last two games took its toll on them. But wow, they more or less no-showed this one.

Bad quality and quantity against, which is rare for the Rangers, even when they no-show. They really did take a nap in this one.

All good things must come to an end. The Rangers three game win streak and their 17-3 lead over the Flyers both came to an end. It’s a poorly timed loss, and an equally poorly timed Rangers no-show. These games do happen, so there’s not much to be overly concerned about. It is what it is.